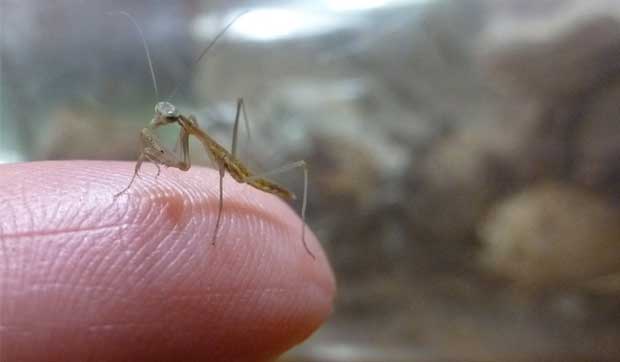 This time of year, Chinese mantid egg cases are pretty easy to find. Look for squarish forms, about the size, shape and color, of a toasted marshmallow, attached to plant stems in gardens and natural areas.

I suppose we all have different ways of coping with winter doldrums. Even though this winter has been far from dull—or wintery, for that matter—it’s still nice to have a few traditions that remind us that when winter comes, spring isn’t far behind.

My mom, for example, grows an amaryllis every January. In fact, this year she’s supplementing that giant bloom with another indoor bulb-growing venture, a lovely purple hyacinth.

Meanwhile, at Hickory Knolls, we are cultivating new life of a different sort:  a fresh batch of Chinese mantids.

Our latest foray into mantid-raising (we’ve had several, what, clutches? Litters? over the years) began somewhat unexpectedly about three weeks ago. I wasn’t in the office at the time but received a text from my amazingly tolerant coworkers that read, in part, “You’ve hatched! Baby praying mantis all over!!!!”

Yes, those four exclamation points were part of the text. For added emphasis, I guess.

At any rate, when I arrived at work I found an aquarium sealed up tight with paper and packing tape, all the better to contain the 200 or so little buggers that were popping out of their egg case like puppies scrambling through an open gate.

Hundreds and hundreds of puppies, that is, furless and six-legged, but otherwise just as cute as any baby dog.

Their former home, an ootheca, or egg case, was one of several collected by our coworker, restoration ecologist Jill Voegtle, a month or so ago. At first it might seem odd that we’d want to remove the cases because, after all, they’ve been touted for decades as an effective means of biological insect control. With these guys on duty, we in theory would have less need for pesticides. And fewer chemicals mean a healthier environment, right?

The only problems are that: a) Chinese mantids eat plenty of beneficial insects too; b) large females also consume vertebrate prey, including hummingbirds and small snakes; and c) they’re not native and, as such, have the potential to outcompete our native arthropod predators like spiders, assassin bugs and ambush bugs.

So Chinese mantids aren’t welcome outside. But they make for a really compelling display inside.

Shortly after that first egg case hatched, we dismantled the packing tape-sealed aquarium and set up our 200 bundles of joy in a fine-meshed insect rearing container called a Praying Mantis Pagoda.

Since then we’ve seen quite a bit of attrition, which at first might seem like our little habitat is failing. But such loss actually is a praying mantis rite of passage. In the wild as well as in captivity, stronger individuals consume their weaker brethren.

As of this writing we’re down to about a half dozen young mantids. Each survivor has staked out a territory within the enclosure and guards it carefully. Now that the little guys are a bit bigger, they’re less inclined to feed on each other, and more apt to pursue other prey, which we’ve provided in the form of flightless fruit flies—the mantid equivalent of puppy chow.

It’s been pretty awesome watching the little guys grow—and  the fun doesn’t show any signs of slowing down. We have six more egg cases that have yet to hatch, and that’s assuming Jill doesn’t come across any more as she trims and prunes the vegetation outside the nature center.

You know what’s also neat? We don’t have a monopoly on mantids. You too can raise one, or some, as indoor pets. All you need are some egg cases—which you can collect freely, as they are not native—and a small container. Before we received our pagoda, we used to use a gallon-size plastic pretzel jar, rubber-banding a square of screen in place of the lid. You can buy flightless fruit flies at pretty much any pet store, or you can raise your own flighted flies by letting some bananas age past their prime.

By the time the mantids need larger prey, our local insects should be starting to show themselves. Small grasshoppers are good options, as are cockroaches. In a pinch you can also buy pet store crickets.

Chinese mantids aren’t quite as showy as amaryllis blooms, nor as fragrant as hyacinths. But there’s something very fulfilling about raising one to adulthood. Plus, they’re darn cute, like furless, six-legged puppies…