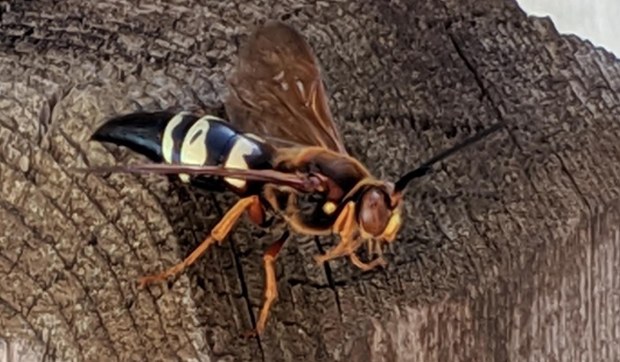 Not a murder hornet! Yes they’re big and yes they’re wasps, but eastern cicada killers pose little threat to any creatures other than cicadas. These large, boldly marked insects are a natural part of our local ecology.

Full disclosure: This column originally ran in August 2012. I’d intended to run it again last week, as it seemed like it was time to revisit the topic–especially given the murder hornet hyperbole that erupted this past spring. Wasps need advocates and in reviewing the species in our area cicada killers are certainly among the largest and most obvious.

But…then I realized I hadn’t heard anyone talking about them this year! So we went with spiders instead. The day after that column’s deadline, I got a text with a photo of a cicada killer in Geneva. Since then multiple calls and emails have ensued. It is indeed time to revisit this fascinating friend, so let’s get to it!

I don’t know if there’s any other group of animals that provides as much excitement, milligram for milligram, as the Class Insecta.

Think about it. Even though they’re small-the biggest one in the world weighs 7100 milligrams, about the same as a Grade A large egg-these guys can be found, in one form or another, on every continent, including Antarctica. According to some estimates, if you were to put all the insects in the world in one giant bug jar (making sure, of course, to punch holes in the lid) you’d end up with about 10 quintillion-that’s 10,000,000,000,000,000,000-individual critters. And that’s not even counting all the non-Insecta beasties like spiders, centipedes, roly polies and the like.

So it should come as no surprise that the animal that’s been causing quite a buzz, literally, the last couple of weeks is an insect. A big insect. A killer insect.

The eastern cicada killer, to be exact.

Favoring areas with exposed sand or soil (patios and ballfields) that is easy to dig in (gardens and golf course sand traps) with an abundance of cicadas (pretty much everywhere, this time of year), the cicada killer is quite at home in and around the TriCities. No big deal, right?

Well, did I happen to mention that cicada killers measure about 2 in. in length? Or that the swollen abdomens of the females can be nearly as big around as a pinky finger? Or that a group of males, hell-bent on defending territories, conduct buzzing, aerial dogfights that sound like a squadron of small fighter planes?

Those qualities, coupled with the fact that cicada killers are indeed wasps, and so in theory can sting, have sent more than a few folks scrambling for their insect field guides these past few weeks.

The good news, for humans, is that cicada killers barely even register on the scale of potential threats. They look scary, for sure, but unless you’re really harassing them, they are quite happy to go about their business and leave you to go about yours.

It’s cicadas they’re after. True to their name, these wasps kill cicadas. But not directly.

The sting of the cicada killer females (males are stingless) delivers a venom with paralytic and preservative properties that causes cicadas-the only things the stings are really meant for-to become immobile. Once her large quarry is rendered powerless, omma cicada killer flies and/or drags her prize back to her home burrow. Down under the ground they go, to the series of chambers Mom has already dug in anticipation of a successful hunt.

After placing a cicada in a chamber, the ever-industrious wasp then lays an egg on the still living but no longer moving insect, which soon becomes food for the developing larva. Eggs destined to become male wasps get one cicada; eggs that are to be females get two or three to provide for their eventual bigger body mass.

Male or female, the little ones feast on their all-they-can-eat buffet, consuming the cicada(s) within about two weeks. Larger, but not yet resembling their extraordinary parents, the larvae then enter a state of diapause in which they spend the winter. Next spring they will pupate, and emerge as full-fledged wasps in summer.

Males will appear first and duke it out to establish territories; females will follow a couple weeks later.

Even though the danger to people is minimal, finding yourself in the same general area as a cicada killer may be a bit unnerving. Just remember, those giant black and yellow cylinders buzzing about aren’t the least bit interested in you. Because milligram for milligram, you’re just not that exciting…to a cicada killer.