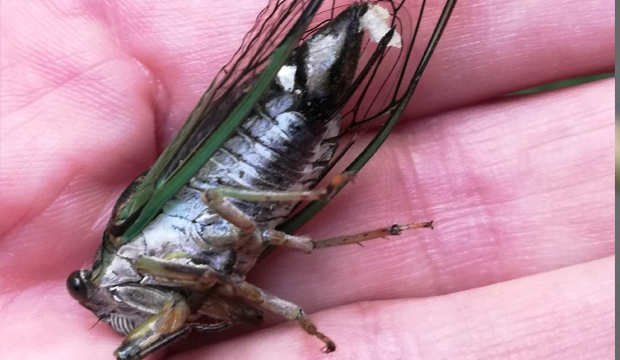 Photo Caption: This female cicada was found on the ground, her egg laying interrupted. The pointed structure extended away from the abdomen is the ovipositor, the insect equivalent of a Sawzall.

To paraphrase an old saying, “Behind every great male, there’s a great female.”  Most folks I know would agree but, if you’d like more proof, all you have to do is head outside. Or, at the very least, open a window.

It’s cicada season in Illinois and, throughout the region, male annual cicadas-great ones all-are calling their timbals out.

(Okay, I suppose before we go any further, I should mention that timbals are the males’ sound-producing organs. They’re located at the base of the abdomen, one on each side, and basically are ribbed membranes the cicada buckles in and pops out. The volume, frequency and duration of the sound, as well as its tone and pulsation, vary by species. Want to make sound the same way a cicada does? Get a clicker, one of those little devices used for dog training. Or push in the “button” on the top of a vacuum-sealed jar and let it pop back out. Click or pop as fast as you can to get an idea of what these guys are going through. Bonus tip: Make this sound repeatedly and you’re guaranteed to have more personal space-maybe even a whole room to yourself. )

Let’s see, where were we? Ah yes, those cicada songs. This time of year they’re hard to miss. In fact, scientists estimate that the sound made by our local cicadas may approach 80 decibels-a sound intensity akin to that of a garbage disposal or a coffee grinder.

But all that racket would be for naught if there weren’t for the females-the great ones for whom the males are making all that fuss.

Female cicadas are present right now too, behind the males, beside the males, above and below them too.  But you wouldn’t know by listening. The sounds they make, rustling wing flicks, are soft and hard to hear.

To really appreciate the great female cicada, you need to check out her ovipositor. Located underneath, at the south end of the abdomen, this egg-laying organ is the insect equivalent of a Sawzall-those reciprocating saws that can cut through just about anything.

The twin serrated tips of the cicada’s remarkable structure move back and forth at speeds of up to 80 strokes per minute, allowing the female to pierce, or saw, into the edges of twigs and branches. After making a slit, she deposits a row of eggs inside a twig. She then moves forward, makes another slit, deposits another row, and on and on, until her mission is complete.

In the ensuing weeks, those eggs will hatch and tiny nymphs, smaller than a grain of rice, will tumble to the ground below. There they will begin tunneling downward, stopping only when they hit a tree root. That root, and the surrounding soil, will be home for the next two to five years, before they burrow their way back topside, molt, and fly to the treetops.

If you walk around outdoors any time in the next few weeks, take a minute or two to look on the ground around you-especially on the sidewalks below mature trees. (Not that sidewalks are great habitat, but they sure make it easier to spot things.)

If you’re walking at night, look for cicada nymphs that have emerged from the soil. I did this the other night and found two in quick succession.

If you’re walking during the day, chances are good you’ll come across some dead or dying cicadas. If you do, and if you dare, go ahead and pick one up. Flip it over and check out the undercarriage. If there’s a small projection at the bottom that looks like the lead end of a mechanical pencil, with the lead retracted, you’ve found yourself a male. If, on the other hand, the tip of the abdomen is pointy, with what looks like a slit in the middle, you’ve found a female.

True story-one summer day a few years back I was walking and looking for cicadas, and found a female with two deformed wings on the sidewalk. I picked her up and placed her on a tree trunk, in the hopes that she’d still be able to carry out her important job because, after all, her Sawzall ovipositor was still intact.

As I started to walk away, a noise caught my attention. It was loud, like the buzz of a male cicada, but more mechanical in nature. I tracked the sound to a porch, where a worker was busily cutting away some siding. With a Sawzall.