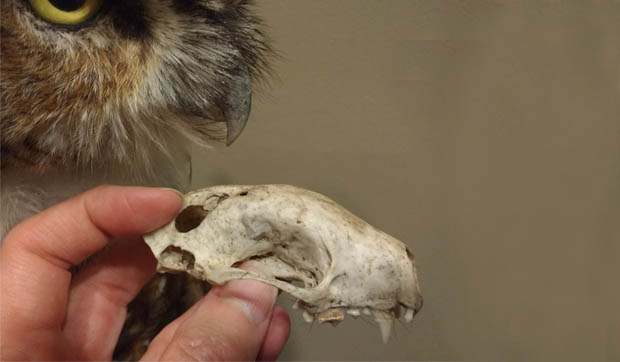 The hole in the skull, as indicated by an index figure, has the same measurements as the beak it is pictured with. But who, whose beak is it?

The day began pretty much like any other. We opened the building, we began some ecological restoration tasks, we found a skull.

It sounds a bit macabre, I know. But every day the circles of life play out around us, and more often than not they leave a trace-sometimes even a mound!-of evidence. It’s then up to us to figure out the clues and interpret what happened.

From the looks of the skull, found in the rain garden just steps from our front door, death had come quickly. A couple of punctures on top and two big holes on either side of the brain cavity indicated the work of an efficient predator. But who, who could it be?

Job one was to establish the identity of the victim. Surprisingly, it was not a raccoon. (Fun fact: Nine out of 10 skulls brought to the nature center for identification are raccoon skulls. I’m not exactly sure why this is, but it sure makes that one-in-10 skull extra intriguing.)

Our first guess, going on the size and dentition, was a weasel. Actually, to be more specific, a mink. (Fun fact No. 2: The Peterson Field Guide to Mammals includes 23 pages devoted to skull ID. All species of weasel, as well as mink, badger and skunk in our area have the same dental formula of 34 total teeth: 16 on top and 18 on the bottom.)

But that ID just didn’t seem right. For one thing, mink rarely fall prey to predators. An adult mink is a lot to tangle with, and with abundant populations of relatively helpless animals like voles and rabbits, a fierce and fearless mink just isn’t worth the effort–not to mention the risk of injury.

Second, in comparing the skull to other mink skulls in our collection, we noted that the shape of the “forehead” wasn’t quite right. Close, but no cigar.

Forging ahead, we opened another box of skulls and, winner winner chicken dinner, we had a match! The hapless individual was Mephitis mephitis–Latin for Stinky stinky or, in other words, a striped skunk.

I’ve always thought of skunks as the Limburger cheese of mammals. Surely the nutrients contained in their bodies could nourish a hungry carnivore, but the odor they exude keeps most predators away.

Most, but not all.

There’s one animal in our midst that dares to dine on Le Pew, reportedly with some regularity. That intrepid consumer is Bubo virginianus, the great horned owl.

From the day I first volunteered in the field of nature education, I’ve heard that owls that owls have no sense of smell and therefore have no qualms preying upon skunks. But honestly I’ve always viewed that statement with a bit of skepticism. Skunks aren’t ferocious fighters like mink, but they’re still a malodorous force to be respected. Further, an adult skunk is quite a handful, er, footful. Meanwhile, again, voles and rabbits are plentiful, smell okay and are ill equipped for fighting back.

Would an owl really risk a hearty dose of stink when quiescent rodents and rabbits will do? Even my doubting self had to admit, the skull before us certainly seemed to indicate yes.

I suppose at this point I should mention that, throughout this inquest, a silent observer stood watch from the corner of my desk. Who, who was it?

To confirm our Whodunnit Hypothesis I took the skull and held it up to Bubo’s beak. The upper mandible, which is hooked and pointed, fit precisely into the smaller hole on the right side of the skull. The lower mandible matched the hole on the opposite side. And a talon aligned with the punctures on top.

But like any good naturalist, I find that this one answer has now sparked many more questions. For one, are owls really not able to smell or taste? Not even a skunk??

Thanks in part to an ill-designed experiment by John James Audubon in the 1820s, the notion that birds can’t smell was accepted as fact for well over 100 years. But more recent research shows many bird species can in fact detect smells, and that their uses of that sense extend beyond feeding into courtship and defense.

Whether great horned owls smell and taste their prey is still up for debate. And studies into bird olfaction are ongoing. Rather than report something incorrectly, I think we’re best off leaving the topic of bird sniffers for a future Good Natured column.

Besides, I suddenly find I have a taste for some Limburger.