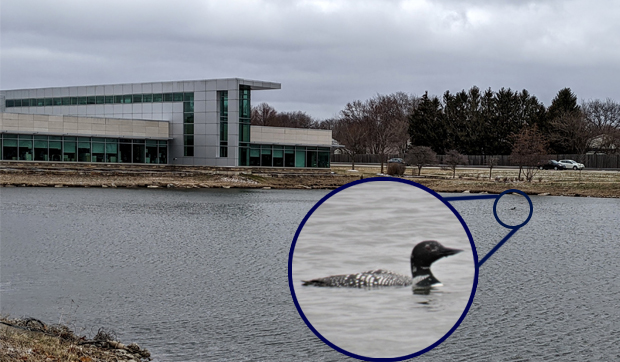 A common loon, on its way to its northern breeding grounds, stopped to rest and feed for a few days at the pond at Delnor Hospital in Geneva. In the larger photo, the bird can be seen as a tiny black dot in the water below the cars.

I’m pretty sure if Forrest Gump’s mother had been a birder, her famous advice to him would had nothing to do with a box of chocolates. “Forrest,” she would have said, “Life is like spring migration. You never know what you’re gonna get.”

Well, to be perfectly honest, life can be like fall migration too. It’s these two times of year that birds are on the move, sometimes for a very long haul. And while the idea of heading south for the winter and north for the summer appeals to our human sense of comfort, for birds these journeys are at best unpredictable, and sometimes downright dangerous.

I will always remember April 18, 2016 as the day a male osprey turned up dead on the sidewalk leading to our Otter Cove Aquatic Park. The poor guy was headed to Minnesota (as indicated by the band on his leg) but met his fate hauling a fish out of a nearby retention pond.

April Fool’s Day of the year 2000 stands out in my mind too. I was working at Red Oak Nature Center in North Aurora, and late in the afternoon we received a call that American white pelicans at landed at Nelson Lake Marsh in Batavia. “Pelicans? In Batavia?? Yeah right-April Fools!” was pretty much how the office conversation went…until we realized that these magnificent birds had indeed plopped down in our midst. Strong winds kept them in the area for several days before they proceeded on with their expedition to their breeding grounds in the northern Great Plains.

Their visits, likely instigated by an increase in population, have now become an annual occurrence. Nevertheless, whenever I see that unique form-the 9-ft. wingspan, the giant throat pouch, the enormous bill (complete with breeding bump on adults)-I get just a little giddy.

Lately though, the giddiness inspired by the pelicans’ presence has been replaced by a new sentiment-one I haven’t experienced in probably 25 years. Thanks to a recent arrival at, of all places, the retention pond at Delnor Hospital, I’ve been feeling positively loony.

It was just a little over a week ago that I heard about the common loon that had set down on the pond at the southeast corner of the hospital campus. Bordered by Randall and Keslinger Roads to the east and south, and by the Northwestern Cancer Center to the north, it’s not exactly what I’d call great habitat. But then again, I’m not a loon. Well, at least not the migrating kind.

We’ll probably never know the twist of fate that brought the bird to that pond, but I do the sight of it brought back fond memories of summers in Michigan’s Upper Peninsula. So many things about the bird were so familiar-its stately black-and-white breeding plumage, its low-rider posture, its persistent, fish-catching dives. About the only part of this sighting that didn’t match my previous experiences was the stiff, snow-speckled breeze and the biting wind chill of 16F.

Just like when fishing on the lake Up North, I was able to watch this loon in complete solitude. No people crowded the walking path (probably because no one else was loony enough to be out on an afternoon like that). Granted I did have to tune out the traffic noise, but the wind helped a great deal with that.

The one thing I couldn’t get over was that the bird was outside of the Cancer Center…the place that saved my life. It was just five years ago that I was a patient in that building, showing up every two weeks for a four-hour infusion of drugs that targeted (and thankfully obliterated) the ugly tumor in my colon. As I’d sit in my private room, hooked up to machines, I’d often look out on the pond in hopes of spotting something other than the mute swans that were delivered there each year as means of discouraging Canada geese.

The chemo messed a bit with my brain on those days, and I often left the center feeling a bit goofy. But if a loon had shown up? I probably don’t even have to say, but I will anyway…I’d have been loony for sure.

Common loons are what ornithologists call primitive birds, meaning they’ve been on this planet for a long time-20 million years, according to fossil records. With webbed feet on powerful legs set well back on their body, they’re well adapted to their aquatic lifestyle. Their solid bones-unusual in flighted birds-help them remain submerged as they swim, torpedo-like, in search of prey.

About the only thing loons aren’t very good at is walking on land. Consequently they tend to nest along the edge of quiet lakes or other still-water settings. Male and female loons are identical, so I’m not sure which the Delnor individual was. Since it’s early in the season, I’d guess male, as they’re the ones who select the nest site. But don’t hold me to that.

One thing I do know for sure is that the loon was in migration mode, headed for a bountiful Northwoods lake. Their nearest nesting habitat is in Wisconsin, north of Green Bay.

As the loon went about its diving in now-you-see-it, now-you-don’t fashion, I sized up the length of the retention pond. Like an airplane, a loon needs a “runway”-a minimum of 30 yards, or up to 1/4 mile if winds are strong-for takeoff, which is achieved by flapping its wings while running across the water’s surface.

The Delnor pond looked to be about two football fields in length, so it met the minimum. But the strong winds meant there wouldn’t be any takeoffs that particular day.

As I walked back to my car, I noticed that my fingers were painfully cold. In my haste to see the bird I’d left my gloves in the car. As I jumped in and started the engine, I looked to the back seat and noticed my binoculars. Gee, they would’ve been handy too!

Ah well. Like Forrest Gump would surely say, Loony is as loony does.