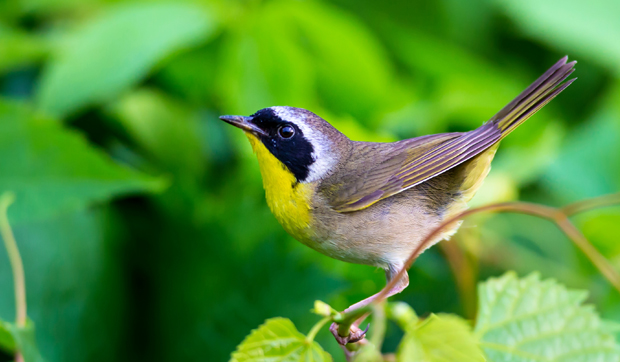 As shown in this stock photo, the male common yellowthroat bears unmistakable plumage that includes a black mask trimmed on top with white. A denizen of dense foliage, it’s a bird more often heard than seen.

The distinctive song of a common yellowthroat rang out from the dogwood in front of the Hickory Knolls Discovery Center in St. Charles. I was loading the van for a morning field trip and, as always, I looked for the songster amid the dense foliage; also as always, I saw nothing. And just like that, I thought for sure that this year would turn out to be just like all the others.

You see, me and the bird that sings that distinctive ditty-we have some history. For 20+ years, the part of my life I’ve spent developing and defending my reputation as a mediocre birder, I’ve tried to catch little Geothlypis trichas off guard. Just once I’d like to find it singing boldly from some obvious perch, so I could admire its black mask and bright yellow throat. But every spring, year after year, my birding forays would end up the same: The bird would be heard, but not seen.

Common yellowthroat? I think not.

Oh sure, other birders will tell you differently. I’ve had photos of the bird sent to me many times, most recently by my friends Dave and Barb in Geneva. The references, too, will note how this species is widespread and plentiful, and how all you have to do is follow your ears and then scan the underbrush to spot its deeply contrasting colors.

If that doesn’t work, say the experts at the Cornell Lab of Ornithology, you can put on a little performance of your own, shushing-out the “pish” sound that many birders use to draw an elusive quarry into the open. According to their website, www.allaboutbirds.org, “Yellowthroats are inquisitive birds and often pop into the open to see who’s making the sound.”

I tell you, I’ve pished away entire afternoons and still come up emptyhanded.

So you can imagine my surprise the other day when, walking with my friend Terri at Lippold Park in Batavia, we not only heard a common yellowthroat, but actually saw one!

Perched on a stem on the east side of Fox Rive Trail, the striking male gave us probably 3 or 4 seconds of viewing time before vanishing amid the thick undergrowth. Wildlife photographers might have maximized that opportunity and, with a camera in burst mode, squeezed off a few dozen shots. I however had only my cellphone, tucked away in a side pocket that I had just started to un-Velcro when the bird disappeared.

Even though the encounter was brief, the identity of the bird was unmistakable. A broad, black mask-picture Batman’s Robin in the old TV series-wrapped across the front of his head while his lemon-yellow throat shone brightly in the afternoon sun.

Mrs. Yellowthroat, whose markings include the characteristic yellow below the bill but lack the black mask, was neither seen nor heard, but may have been nearby, perhaps tending to the work of building the pair’s nest.

Female common yellowthroats have a bit of a, shall we say, reputation…one that includes canoodling with multiple mates. Her behaviors that signal she is ready to mate, such as wing flutters and chip calls, sometimes attract the attention of other males who don’t hesitate to step in when Mr. Yellowthroat is momentarily distracted.

Once the eggs are laid, though, the work of incubating and rearing the young falls to the primary pair. The female incubates but both parents share in the feeding of the young, which grow rapidly on a diet of soft-bodied insects.

We all know, what goes in must come out, and baby birds are no different. Common yellowthroats are one of many species of birds whose offspring produce fecal sacs-that is, a tidy package of waste encased in a mucous membrane. After feeding, the parent bird switches to cleanup mode, sometimes gently prodding the nestlings to “go,” then flying the sac far away from the nest. Such behavior not only keeps the home environment neat and tidy but also reduces the chances that predators will be able to detect the small and generally helpless young.

These housekeeping activities may deter predation, but not brood parasitism. Common yellowthroat nests are frequent targets for brown-headed cowbirds, the species famous (or maybe infamous) for depositing their eggs in other birds’ nests.

Cowbird chicks notwithstanding, common yellowthroat populations are considered stable in our area. You can try looking for these birds in variety of habitats-prairies to wetlands to woodland edges, so long as they feature thick tangles of low vegetation.

If you’re lucky you might catch a glimpse of a male and, if you’re super-lucky, a female. But even if you can’t see these, ahem, common, birds, you’ll more than likely hear them-no matter witchety-witchety-which direction you look.