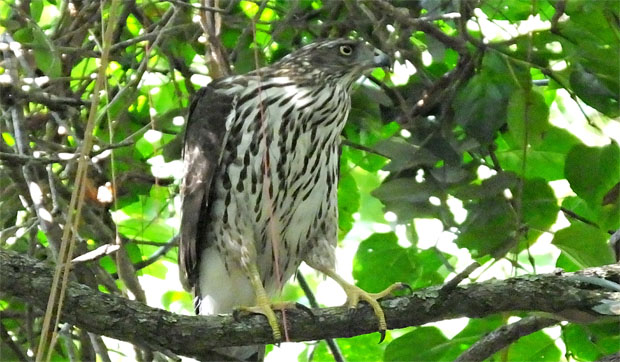 This young Cooper’s hawk can be identified by its immature plumage—a brown back, white breast with crisp brown streaks—as well as its light-colored eyes. Adult birds have a bluish-gray back, orangish bars on the breast and red eyes.

August is back-to-school month, a time when kids of all ages leave home, some for the very first time. With so many new experiences on the horizon, back-to-school time also is hand-wringing time for parents everywhere. They want their offspring to succeed, but their visions of greatness are tempered by stark realities:

“Will my kid thrive in his new environment?”

“Does he have what it takes to make it in the world?”

“Will he remember to use a Kleenex?”

It’s not much different in the animal world. Wild parents spend weeks and sometimes months grooming their young for independence, relying on a combination of instinct and learned behaviors to give the kiddos what they need to survive: the abilities to find water and shelter, and the skills required to find food without getting eaten in the process.

This sort of thing is going on right now in our parks and natural areas–even your own backyard. If you have any doubt, just ask the McKinseys of St. Charles.

Laura McKinsey alerted us to the presence of nesting Cooper’s hawks in her neighborhood about two months ago. She especially noted the activities of Mr. Cooper’s, who worked double shifts to keep watch over his family while also making sure they were well supplied with small birds and other prey items.

(Interestingly, many species accounts make reference to the male Cooper’s hawk’s efforts to “appease” the female. Why? Female Cooper’s are up to one-third larger than males and, while there are few records of intra-species aggression, the implication is that Mom Cooper’s could whup Pop’s tail feathers.)

When I visited the McKinseys the other day, I wondered if I’d be able to spot any of their Coops. My binocular skills are unexceptional and easily thwarted by leaves; to top it off, Cooper’s hawk markings let them blend right in amid the branches and twigs.

But one of the great things about birding is that it isn’t just a visual pursuit-you can use your ears too. And it took only about a second to hear the raucous Cooper’s family-Mom, Pop and the three kids-literally whooping it up in the trees between Third and Fourth Streets.

A fuss like that can sometimes mean a predator is nearby. (Even tho Cooper’s are birds of prey, they fall right in the middle of the bird-of-prey spectrum. Ranging in size from about 15 to about 20 inches long, they’re bigger than kestrels but smaller than buteo hawks as well as great-horned owls. Young birds in particular are vulnerable to attacks by larger birds, as well as predatory mammals like raccoons and cats.)
But this case was quite the opposite. A songbird-a robin, I believe-had ended up in the clutches of one of the Cooper’s, and in the frenzy that followed it was every hawk for itself.

As I stood at a distance, trying to follow the action without creating too much commotion myself, I couldn’t help but think how neat it was to be able to watch wild childrearing in action, right in suburban St. Charles. Such an opportunity would’ve been next to impossible as recently as 35 years ago.

At that time, Cooper’s hawks were listed as endangered in Illinois, and sightings were truly rare. (Check out Kane County Audubon’s web site, www.kanecountyaudubon.org, if you’d like to see for yourself. Know how many Cooper’s hawks were seen in May of 1987? None. Zip, zero, zilch, nada. But since then, despite occasional down years, the numbers have trended steadily upward.)

One factor that seems to be contributing to the Cooper’s hawk’s success as a species is the upswing in backyard birdfeeding. Even though Cooper’s hawks don’t eat seeds directly, they do feed on seed-eating birds (and chipmunks, mice and voles). So it makes sense that the bubble in the food chain caused by more food sources, in the form of platform feeders, hopper feeders, tube feeders, suet feeders et al, would travel up to the next trophic level.

As I watched the McKinsey hawks, several non-Coop feathers fluttered to the ground like crumbs from a table. That evidence combined with the high-pitched, perhaps envious, calls of the two siblings, were proof positive that the Cooper’s fledglings had made it through another day, and are one step closer to surviving on their own.