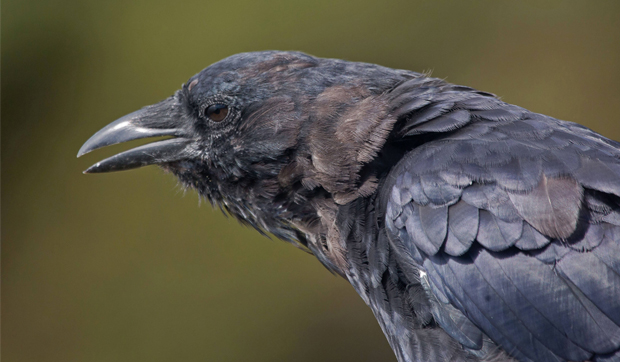 Photo Caption: The American crow, our area’s largest corvid, can be found throughout Kane County and is equally at home in suburban as well as rural environments. (Photo credit: Peter Pearsall, USFWS)

Okay folks, show of hands. How many of you have spent the past several weeks thinking of crows and blue jays every time you hear the term COVID-19?

Well, maybe it’s just me. But, still… Looking at the word COVID through nature-colored glasses, I see the word CORVID, which is short for Corvidae, the family to which crows and blue jays belong. And even though I know that COVID is a virus, and fascinating in its own right, I can’t help but mentally insert an R, and drift off into peaceful reveries of one of my most favorite families of birds.

Corvidae is derived from the word Corvus, which is the Latin word for raven-another member of this large family. We’ll get back to them in a minute. But first I want to see if you’ll have the same A-HA! moment I had a couple weeks ago as I was musing over COVID and CORVID with my good friend Valerie.

A crow enthusiast who’s also more cultured than I, Valerie pointed out that the connection goes beyond the presence or lack of the letter R. Back in the days when another serious illness-plague-ravaged human populations, physicians treating the stricken adopted an outfit designed to repel the miasma, or pervasive stink, that marked the era and was thought to perpetuate the disease.

A dark cloak and beaked mask stuffed with aromatic herbs were the mainstays of the getup, which was memorialized in drawings as well as costumes still seen today. Even non birders will note, it bears a distinct resemblance to ravens and crows. Further, to repel the cooties so abundant in plague-ravaged regions, the cloak was coated in either wax or suet. Suet, as those with birdfeeders know, is relished by all sorts of corvids.

Our area currently is home to two members of Corvidae, the American crow, Corvus brachyrhynchos, and the blue jay, Cyanocitta cristata. Members of both these species have helped enliven my past few weeks of sheltering at home-and maybe yours too.

Just about every morning I’ve watched a pair of crows work the neighborhood, flying from yard to yard in their search for delectables-those left out intentionally, as well as accidentally. As omnivores, crows partake of both animal- and plant-based foods and seem to have a particular fondness for human-sourced items like pizza and French fries. (Their digestion system is however quite rugged, and they are capable of producing pellets of indigestible material, and expelling them, a la owls–and hawks, herons, grebes, gulls, cormorants, kingfishers, assorted insect eaters and shorebirds…and, of course, the crow’s cousins the jays.)

Not to be outdone, the blue jays have been putting on quite a show too. While at Delnor Woods Park on a recent Wednesday I heard the raucous jeer or “jay” calls of a flock-no, a mob-of seven blue jays from the depths of the woods. Often that sort of commotion indicates that a bird of prey-a hawk or sleepy owl-has been detected. Once the alarm has been sounded, any blue jays in earshot come flapping in.

I started heading in the direction of the calls to see if I could spot the cause of the ruckus. But before I got very far, the jays appeared and landed in a nearby oak tree. They continued carrying on, and it looked as though one of their own was the target. Did this individual break rank and take something of value from a bird higher up in the dominance hierarchy? Was s/he an interloper from another jay group? I wish I spoke cristata so we ‘d know for sure.

I do know I’ve also been hearing a lot of blue jay vocalizations in my Davis School neighborhood. Chances are you’ve been hearing them too, whether you realized it or not. These birds have a wonderful repertoire of sounds, with two of the most common being the pump handle, which has a mechanical tone and sounds like the squeak of an old-fashioned hand pump, and a screaming keeeeeer call that, I kid you not, sounds just like a red-tailed hawk.

The activities of these corvid species is music to my ears, given the adversity both have faced over the last decade and a half. In the early 2000s, West Nile virus arrived in our area, and crows especially were hard hit. According to Kane County Audubon’s spring bird count data, in 2003 the local crow population dipped to less than half of what their numbers had been in years prior.

When you think about it, WNV is kinda like the crows’ COVID. One infected crow, maybe not even showing symptoms, flies into a communal roost and spreads droplets amongst its flockmates; before you know it, the virus is rampant in the population.

Blue jays, though just as susceptible, fared a little better due to their not forming communal roosts. But they have had their own problems to contend with, including collisions with manmade objects and death at the paws of cats and dogs. According to the North American Breeding Bird Survey, blue jay populations decreased 28% between 1966 and 2015.

Crows and blue jays, highly intelligent birds, never cease to amaze with their antics and powers of reason. But what about ravens? Corvus corax, the biggest corvid of all, is certainly a possibility if you travel north, east or west. But so far, even though we do get calls from time to time about raven sightings in Kane County, I suspect those birds were crows that looked exceptionally large. Illinois is not part of the raven’s current range, and the last documented sighting occurred during fall migration in 2007, at Illinois Beach State Park.

(Late breaking news: Two ravens were seen and recorded at Indiana Dunes State Park in Porter County, IN-a mere 100 miles or so, as the crow flies, from Kane County. Resident crows there quickly chased the visiting birds away and they were last spotted flying west…to Illinois? Doubtful. But these days you can never say never.)

As we continue to deal with the effects of a novel virus, keep your eyes to the sky-and the yard, the trees and the pizza boxes. Your worries about COVID-19 might, like mine, melt away amid welcome sightings of the one, the only, the CORVIDs.