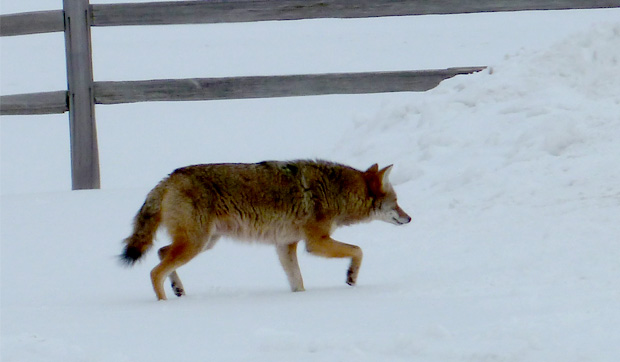 Photo Caption: Local coyotes are on the move as breeding season approaches.

The other day as I was walking to work, taking in the sights and sounds of a warm-ish winter morning, I noticed that the neighborhood dogs were a little barkier than usual. Relieved that it wasn’t my crew causing the ruckus-they were at home, likely staking out spots for their post-breakfast naps-I’d put my mind on what the rest of the would hold: a meeting, a program, lunch. Ah, glorious lunch…just a few short hours away…

Alas, my reverie over the midday repast was short lived. I became aware of another sound amid the continued barks and woofs. A human sound, it was. And it was directed at me!

I swiveled around and saw, about a half block away, a woman walking a gorgeous German shepherd. She was waving, pointing, and saying…ah…something I couldn’t quite make out.

Now usually when I find myself in this sort of situation it’s because I’ve dropped something. A glove, a paper, sunglasses… I always appreciate when people point out these occurrences (well, except for that one time when I dropped an opossum during a presentation; on that occasion all the pointing out only served to fluster the poor animal to the point where it started dropping things too). However on this particular morning I was wearing both gloves and was paper and sunglass free.

The dimmer switch in my brain slowly turned brighter as I listened more intently to the shepherd woman’s words: “He’s following you!”

I wish I could say it was a big, magnificent animal decked out in thick winter pelage. But, no, it was just average sized. At least it didn’t have mange, I thought as I watched it scurry north on Seventh St. Its head was down and its tail was tucked between its hind legs; clearly it didn’t appreciate all the attention being paid by its domestic cousins barking from their respective windows.

I fumbled for my cellphone to quickly snap a picture, but by the time I got it out the animal had already turned west on Horne where I promptly lost sight of it.

I shouted a thank you to Shepherd Woman and then crossed over to the coyote side of the street. A fine dusting of snow coated the sidewalk. What better time to take a few pictures of the tracks that were left behind!  Using my lip balm next to a pawprint for scale, I took a few shots of individual tracks and then a few wider angle photos that showed length of stride.

The dog barks subsided as I resumed my walk to work. Mentally I added one more item to the day’s agenda: Remind folks that coyote season is upon us.

Just like our human calendars dictate certain activities at certain times of year, so, too, do the internal drives of our wild neighbors. Right now, though we have yet to really notice it, the days are getting longer. We’ve added some 20 minutes to our photoperiod, or day length, since the winter solstice on December 21.

Local wildlife is certainly aware though, and they are proceeding full speed ahead with their seasonally appropriate tasks.

You know what’s really interesting? Our calendar and that of the wild things intersects next month. That’s right, February, our “month of love,” is also mating season for wildlife-including coyotes.

How this schedule affects us is that January, our “month of new beginnings,” is also coyotes’ “month of making sure the breeding pair’s territory is free of any threats that might interfere with their relationship or pose harm to the pups that will be born in April.”

I know there are folks who think the solution to coyote conflicts is to just, as one gentleman said to me, “get rid of ’em.” But the thing is, we can’t. Even if we could eliminate every coyote from every neighborhood, more would move in to fill the void we created.

We can, however, coexist. Here’s a look at some recommended practices:

These are good tips, but you know what’s even better? Learning what you can about the ways of these compelling wild neighbors. In fact here in the Chicago area we’re particularly rich in local, relevant information thanks to an effort called the Urban Coyote Research Project. Over the last 20 years wildlife biologists have compiled data, field observations and case studies, and thoughtfully shared it all on an amazing website, urbancoyoteresearch.com. Check it out when you have a chance. You, and the coyotes, will be glad you did.