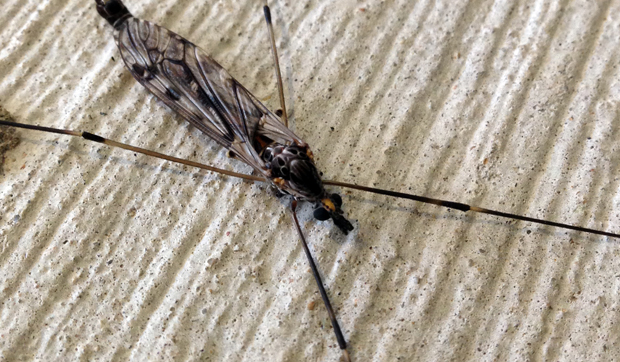 A member of the order Diptera, the true flies, crane flies have just one pair of wings. In the place of the hind wings is a pair of structures called halteres, which look like small knobs and aid in balance during flight. Crane flies are also common prey items for local insectivores, which may account for this individual having only four legs. (Photo courtesy of Valerie Blaine)

The other night a large, mosquito-like insect was flying around the kitchen. I waited until it landed, then let it outside. Not five minutes later, I spotted another. Out it went, too.

Then Tuesday, at work, someone reported, in a frequency only slightly lower than a dog whistle, that we had a GIANT mosquito in the lobby. I went to investigate (OK, investigate and take pictures), then caught and set that insect free as well. On Wednesday, amid much squealing, yet another was relocated from the basement to the great outdoors.

Far from promoting a mass increase in enormous bloodsuckers, these various releases were instead simply helping one of our area’s most misunderstood insects, the crane fly.

I’ll admit it. I have a thing for these little giants. Unlike fireflies, butterflies and dragonflies (and caddisflies, mayflies, stoneflies, whiteflies, sawflies …) crane flies are true flies, members of the insect order Diptera. Di- means two and -ptera means wings; having two wings instead of four is the trait that distinguishes these insects from virtually all others.

Crane flies make up the largest family within the order-more than 1,500 have been described in North America. As a bonus to us farsighted (as in hyperopic) fly-watchers, these insects are indeed quite large. Many individuals sport body lengths of around an inch, with legs that measure nearly twice that long.

Without a doubt, crane flies give you a chance to see, up close and personal, just what it is that makes a fly a fly. Where the second set of wings normally would sprout, flies instead sport a pair of small, knobbed structures called halteres. They stick out at right angles to the fly’s body and look something like the balancing poles used by tightrope walkers like the “Fly”-ing Wallendas.

In fact, halteres are all about balancing. As a fly flies, the halteres vibrate rapidly and out of phase with the wings and help keep the insect flying level. The sensory information provided by the halteres is much like that provided by the instrument panel on an airplane. Mess with a fly’s halteres, and you’ll ground it for life.

“Gladly!” you’re probably thinking, as you picture a house fly tainting your picnic foods–or, worse, its larvae – maggots – making themselves at home in something meaty and dead. While it’s true that some fly species are vectors of disease, crane flies are harmless. They might look for all the world like enormous, bloodthirsty mosquitoes, but the reality is that adult crane flies rarely feed. Their primary goal at this brief, final stage of life is to find a mate and pass along some genes, perhaps procuring a drink of nectar along the way.

Crane fly larvae, on the other hand, have a different objective. They aim to eat as much as possible during the 10 months or so they spend as juveniles. Plump and soft, usually light gray in color, the legless crane fly larvae can grow to almost three inches as they munch away on their way to pupation.

Crane fly larvae can be found in a variety of habitats, ranging from streams and ponds to moist woodland floors, crop fields and lawns. And their feeding habits are as varied as their homes. Most are scavengers, with decomposing plant matter making up the bulk of their diet. Poke around in the leaf packs of our local creeks and chances are good you’ll find some larvae there, munching away. Certain other species, though, are herbivores and still others are predators.

Given that crane fly larvae are large-up to 3 in. in length-as well as sluggish, legless and soft (what more could a predator ask for?!) they are common prey for fish and other aquatic meat-eaters. Adults, though winged, are described as weak and clumsy fliers and as such are on the menu for spiders, bats, birds, frogs and other insectivores.

As an additional role, aquatic crane fly larvae also serve as indicators of water quality. They spend nearly a year in the water and can’t tolerate a lot of pollution, so their presence in a stream is a sign that the water is at least moderately clean.

The next time you spot a fly on the wall, take some time to check it out. Does it look like a giant mosquito? Can you see the halteres? You may find you have a thing for crane flies too!