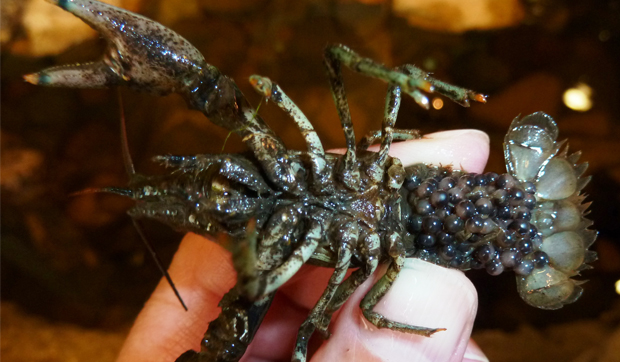 It’s berry season in northern Illinois-crayfish-berries, that is! Female crayfish carry their eggs beneath their abdomen, in a cluster that looks very much like a plump, juicy berry.

Yes folks, it’s that time of year again. Crayfish are breeding, and many females are in family way. But rather than displaying a bulging tummy, as so many other animals do, female crayfish carry their fertilized eggs externally. Tucked beneath the tail, the clusters of tiny dark spheres look for all the world like juicy blackberries. Appropriately enough, momma crayfish in this delicate state are referred to as being “in berry.”

It’s quite touching, actually, the way they tote their offspring around, both as eggs and as wee hatchlings. These hard-shelled invertebrates that are all pincers and claws possess a parenting instinct that’s downright inspirational. But before we get to the warm, fuzzy side of crayfish, let’s take a couple steps back, to the beginning of what is an extremely fascinating procreative cycle.

When male and female crayfish enter into reproductive mode, they communicate not with wine and roses nor even a suggestive wave of a claw or eyestalk. Instead, they consort using the seductive medium of…urine.

Loaded with chemicals that communicate such vital information as species, gender, social rank and health status, urine plays a vital role in crayfish courtship rituals. Interestingly enough, it acts as both an aphrodisiac, and a call to arms.

Urine is often expelled as part of aggressive encounters between both sexes of crayfish. The victor gives a parting “shot” to the loser, letting him or her and any other close by crayfish know that there is a very pumped-up individual in the area and he or she is not to be messed with.

During mating season, female crayfish have been found to emit urine as well as other sensory signals that say not only, “Come hither,” but also “Wanna wrestle?” The thinking is that females want to receive genetic material from the fittest individuals possible; what better way to ensure the best of the best than to put prospective suitors through a thorough fitness test? Only after a mock-aggressive encounter, wherein the male gets to demonstrate his strength and vigor, is mating allowed to occur.

At any rate, all that excitement happened a while ago. Male crayfish have gone their merry ways, and many have reverted to a non-reproductive phase that focuses primarily on eating and trying not to get eaten.

The females, meanwhile, are now getting on with the business of raising a family. And that’s where the berries come in.

To get ready for oviposition, or egg laying, a female crayfish first cleans her abdomen thoroughly, using brushing motions of her fifth pair of pereiopods, or legs. When things are neat and tidy, she turns over on her back, curls her abdomen forward and secretes a substance called glair, which is sticky and functions kind of like mucilage for crayfish eggs.

She then releases her eggs, along with the sperm she collected, into the glair. Due to the shape of the space within the curled abdomen, as well as the size and orb-like nature of the eggs themselves, the whole mass takes on the look of a plump, juicy berry and henceforth the expectant momma is referred to as being “in berry”

With her future family thus attached, she will walk around for anywhere from a couple to as many as 20 weeks, depending on water temperature, all the while providing a safe and nurturing environment for the wee ones nestled beneath her abdomen.

When the young hatch, their still-incomplete pincers, or chelae, are hook shaped- just what they need to hang onto Mom for dear life, which they do for another week or two, until they pass through two molts. (Being invertebrates, crayfish are equipped not with bones, but rather a hard exoskeleton. The only way to grow is to shed this hard covering is through molting, or ecdysis.)

By the time the young crayfish reach their third instar, or developmental stage, they are capable of making short forays away from Mom and out into the great beyond of the stream bottom. After molting again, they cut their ties completely and become free- living, though not yet full grown, li’l crays.

The next time you see a bowlful of berries-particularly plump, ripe blackberries-pause for a moment, and reflect on the other types of round, juicy globules it may resemble. Then share your thoughts with a friend. It’s a great way to get the whole bowl to yourself-I guarantee!

Next week: We explore a relative newcomer to the Illinois crayfish scene.