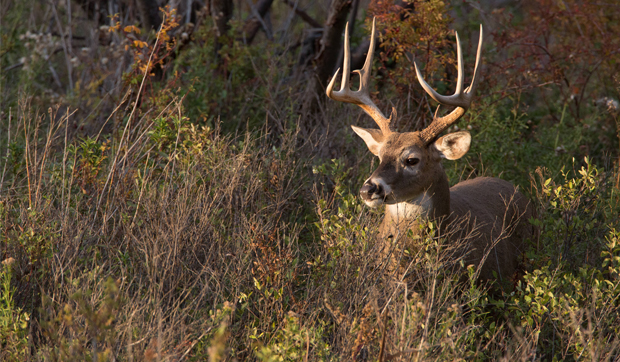 Now that we’ve entered that interstitial period between Christmas and New Years, you may find yourself with a little extra time on your hands. Time to ponder and reflect; time to consider some of the traditions that make the holidays so meaningful.

How, for instance, did fruitcake become a staple, both on the table and as a punchline? Which evergreen makes the best Christmas tree, pine or fir? And what exactly is the difference between our local white-tailed deer, and Santa’s prancing reindeer?

Not to brag, but I feel uniquely qualified to chime in on that last rumination. For the past month I’ve been traveling to senior living communities throughout the area presenting the talk, “Deer and Reindeer.” It’s the latest in a whole series of outreach programs designed to bring nature in for those who might not often make it out.

The sessions are informative, and a whole lot of fun. In putting the deer program together we gathered some fun facts about both species, then brought them together in a compare-and-contrast sort of way. We even managed to tie in Margaret Thatcher!

One of the first things we were surprised to learn was that white-tailed deer and reindeer/caribou actually are fairly closely related. Both belong to the Cervidae, or deer, family, and both are members of the subfamily Capreolinae. The Latin-based words may seem haughty but the takeaway is that white-tailed deer and reindeer/caribou share some common characteristics, namely the bones in their feet and the way their antler cycle includes a pause. (I thought this was really interesting: Elk, which I always thought were pretty closely related to our local deer, actually belong to the subfamily Cervinae. Their feet are different and their antlers begin regrowing as soon as the old ones are shed. Fascinating stuff!)

Before we go any further I should probably mention that there is a difference between reindeer and caribou…and that difference is thanks to humans. Both animals are the same genus and species, Rangifer tarandus, but caribou are the wild form and roam northern North America and Greenland, while reindeer are (mostly) domesticated and found in northern Eurasia.

Over the years, reindeer have been used to provide transportation (saddled as well as harnessed to a sleigh); meat; milk; fur; and tools, in the form of antlers crafted into knife handles, mallets and the like. Reindeer are shorter and stockier than caribou, and probably better behaved.

Because of the extreme cold they must endure, reindeer and caribou have developed a unique set of adaptations designed to retain heat-and moisture. Their thick coats insulate their bodies even when the temperature drops to -50F, and their noses are covered with a soft velvet fur-a sharp contrast to other members of the family, including our whitetails, which have bare noses that allow condensation to form.

Fuzzy noses are cute, but what’s really amazing is on the inside. Reindeer and caribou’s complex nasal passages actually warm air that’s breathed in, so it doesn’t chill the animal’s core as it enters the lungs. Then it’s cooled as it’s exhaled, and those amazing nasal passages work to contain as much moisture as possible. Water is scarce in the frozen tundra, so internal conservation is important. It also lets reindeer exhale, even in the dead of winter, without producing a cloud of water vapor.

And you thought Rudolph’s nose was special!

White-tailed deer noses are pretty keen too, in a different way. Their sense of smell is estimated to be 500 to 1,000 times more sensitive than a human’s. They can smell a person a half-mile away, and process six different smells at once. Let’s just say they’re separate but equal to their reindeer counterparts.

Noses may be neat, but when we line up the two species, whitetails and reindeer, side by side, the feature that’s most notable is their antlers. Whitetail bucks have them; whitetail does typically don’t. (I think the odds of finding an antlered doe are something like one in 8,500 or so.) But with reindeer, both the bulls and the cows have them.

Whitetail and reindeer males use their antlers to defend territory and display breeding fitness, and once their displays are over they shed the cumbersome growths. The female reindeer though…they need their antlers throughout the snowy winter months, to defend their access to the low-growing mosses and lichens that form the bulk of their diet during that time. For this reason, they don’t shed their antlers until spring.

Let’s say this one more time: Male reindeer shed their antlers as we head into winter; female reindeer hold onto theirs until spring. You might be able to see where this is going. Santa’s reindeer are always depicted as having antlers; therefore Dasher, Dancer, Prancer and on down the line, all must be female.