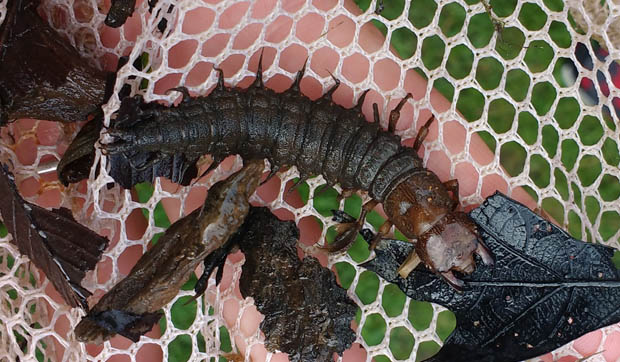 Photo Caption: This hellgrammite, also called a toe-biter, is the larval form of the large terrestrial insect known as the dobsonfly. Hellgrammites take one to three years to mature and need clean, well-oxygenated water in order to survive.

I can still remember my first dobsonfly.

The date was July of 2002. The place, Red Oak Nature Center in North Aurora. The insect was contained within a two-quart Tupperware bowl–with holes poked in the lid for ventilation. The woman carrying it clearly was unsettled, her voice quavering as she described how the “alien” creature had landed on her screen door.

Judging by the way she emphasized the word, it was clear she did not mean that the bug came from another country; in fact, she seemed pretty darn sure the critter was not of this world at all. Her words tumbled out in a rush, and while I don’t recall the exact conversation I do remember her using the words “cosmic journey” and “some other planet.” Her father and two children had accompanied her on her mission, and nodded solemnly as she recounted “E.T.’s” discovery and capture.

Looking into the Tupperware, I could kind of see her point. The creature looked very unlike any of our “regular” summer bugs. It measured nearly 5 inches in length, and its long, vein-streaked wings were speckled with small white dots-perhaps stardust, and proof of the insect’s intergalactic trek, the children said.

But its most conspicuous feature was a pair of enormous jaws, or mandibles. They were thick and pointed and looked quite capable of giving a good pinch. They were also the reason, I suspect, for the heavy leather gloves the woman had stuffed in her back pocket.

It took some convincing, but we finally got the family to agree to take their “extraterrestrial” bug home, put it back on the screen where they found it, and let it get down to business – namely, making more of its own species: Corydalus cornutus, also known as the eastern dobsonfly.

After the little group left, we – the geeky naturalists – got down to our business, which was learning more about the amazing insect we had previously read about but, until the family’s arrival, had never been privileged to meet.

Dobsonflies are impressive creatures indeed. Far from alien, they are an integral part of our native fauna. Found on land as adults, they spend the majority of their lifespan as larvae, underwater. This phase lasts so long – two or three years in our area, and up to five in cold or intermittent streams – that the larvae even have their own names. Most commonly called hellgrammites, they’re also known as toe-biters, go-devils and sometimes conniption bugs. Given the larvae’s prominent–and powerful–mandibles, it doesn’t take a lot of imagination to picture the incidents that led up to these descriptive common names.

One of nature’s strictest rules is Eat or Be Eaten and, despite their fierce appearance, hellgrammites are not above the law. Prowling the depths of rivers and streams, they consume their fair share of underwater insects but are, in turn, consumed by a fair share of fish, including smallmouth bass and panfish like crappie and bluegill.

They also have a sensitive side: Hellgrammites are vulnerable to pollution. They breathe through delicate, tufted tracheal gills, structures that are easily fouled by chemicals or too much sediment.

Sad to say, we don’t see a lot of hellgrammites – or dobsonflies – here in the Tri-Cities. So when one shows up, it’s noteworthy. Just as I still remember my first dobsonfly from years ago, I’m probably not going to forget the larva that we found last week. As big as my pinky, with pinching jaws shaped liked sickles, the young insect was plucked from a rushing riffle in Ferson Creek by a group of park district nature campers. We placed the larva temporarily in a white dish pan, where we could observe its movements.

Without any rocks to cling to or hide under, the creature quickly latched onto the nearest object it could find, which happened to be a large rusty crayfish (that is, Orconectes rusticus…not an iron crayfish that was left out in the rain). The crayfish reacted equally and oppositely, shooting backwards across the pan and dislodging the “conniption bug,” which then proceeded to have a conniption of its own.

Flailing about the pan, the hellgrammite gave us brief glimpses of its intricate underparts-those gills, which are adapted to well-oxygenated waters; and two sets of hooks, which it uses to cling to the underside of rocks in streams. And then there were those mandibles-so powerful in this life stage, they are used to crush prey (everything from fish and tadpoles to invertebrates like caddisfly larvae and small crayfish).

We were amazed, for sure, and one of the kids suggested we try to keep it as a pet. But, knowing how rare hellgrammites are in our area, we decided we didn’t want to stress the little guy/gal out any more than we already had, so back to its riffle it went.

Moments later, we found was probably our toe-biter’s relative, like maybe its grandpa or great uncle. Walking along Ferson Creek, we found an adult dobsonfly clinging to some vegetation. A couple kids shrieked, and one initially refused to get close. But our oohs and aahs eventually inspired even the most squeamish of the group to move in for a closer look.

This individual, a male, possessed a set of long mandibles that looked like ice tongs-the vintage kind icemen used back in the day. These structures were imposing for sure, but were so large as to be completely useless save for one important function…attracting female dobsonflies.

As adults, dobsonflies live just a short time – a few days to a week or so, depending on fat stores – and likely don’t feed. Their sole purpose is to find a mate and allow the circle of life to begin again. The males’ enormous mandibles serve as an indication of fitness for breeding, with bigger meaning better. And our boy was impressive! Not wishing to disrupt the cycle, we took some photos, wished the insect well, and went on our merry way.

With any luck, the dobsonfly we found was successful in his mating mission. Good thing, because I’m sure he’s gone by now, where all good go-devils go, up to that Big Riffle in the Sky. His offspring will live on though, as will his presence in the kids’ summer camp memories. Years from now, I bet they’ll still remember their first dobsonfly.