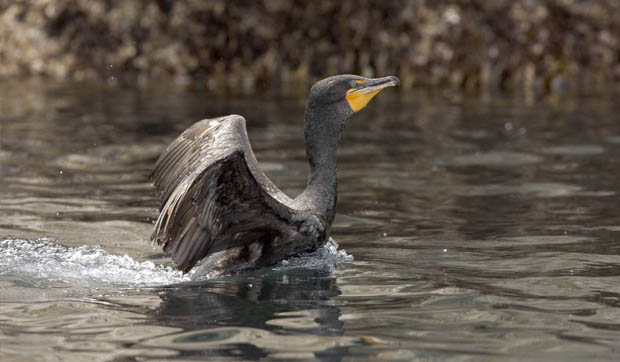 Double-crested cormorants sit low in the water, a trait that helps distinguish them from other waterfowl. The species has seen a number of ups and downs and previously was listed as endangered in Illinois, but today enjoys healthy population numbers.  (Photo credit: Steve Hillebrand/USFWS)

Last week when we looked at double-crested cormorants, we were lucky enough to have a TV show theme song that described this familiar, fish-eating species almost to a T: (da-da-da dum, snap-snap) Creepy, kooky, mysterious, spooky…

This week though, as we continue our exploration, the descriptors don’t flow quite as lyrically. But they do tell a remarkable story: Persecuted. Afflicted. Nearly Extinct. Protected. Recovered. Abundant. Controversial.

If we were to step back in time a hundred years or so, we’d find that double-crested cormorants, or DCCOs, were common in Illinois during spring and fall migrations but otherwise maintained a low profile. A few pairs nested along the Illinois River although, seemingly, no one was happy about it. Regarded as threats to fishermen’s livelihoods, they dubbed the birds an uncomplimentary and unprintable nickname and summarily trapped, poisoned and shot as many as they could find.

As the 20th Century progressed, so did humans’ impact on the environment-and on DCCOs. The use of dichloro-diphenyl-trichloroethane (DDT) and other pesticides compounded in the food chain and resulted in a reduction in nesting success-not just for cormorants, but other birds too, most notably the bald eagle.

Concurrently, water quality was on the skids. Uncurbed pollution drove fish populations down and made suitable habitat hard to find. DCCOs’ scant numbers plummeted even further, to the point where in 1960 they were added to the Illinois Endangered Species list.

The future looked grim for this enigmatic bird. But then, slowly, things began to change.

The protection afforded by the Endangered status, along with North American bans on DDT and various other chemicals, as well as the passage of the Clean Water Act, helped DCCOs begin their recovery. Wildlife management teams lent a hand too, constructing artificial nesting platforms in known breeding areas along the Mississippi.  From 12 nests in two trees in Carroll County in 1974, the birds’ Illinois breeding population grew to 16 nests in 1978 and more than 110 in 1984.

In our area, similar increases were noted. According to Kane County Audubon’s Spring Bird Count data, no cormorants were noted from 1972, the year Kane County spring counts began, until 1986, when three birds were sighted. Three more were spotted during the 1989 spring count, and the birds have been seen in every year since. Birders counted 94 DCCOs in 2015, the most recent year for which data is available.

There’s no doubt, the cormorant population has turned a corner. You’d think that would mean that all is well, and our story could end with a “And they all lived happily ever after.”

It could, were it not for the fact that DCCOs still face some significant challenges. Those same ghosts that haunted them before, in the form of allegations that they harm fish populations, still swirl in the air each time their name is mentioned. Perhaps not so much locally, but certainly any place where sport fishing, commercial fishing and/or fish farming figure into local economies.

One common claim, that DCCOs have decimated the Great Lakes’ yellow perch population, has been studied extensively. For example, a three-year study of coromorants’ impact on fish populations in Green Bay found that the birds did feed heavily on perch in early summer. But then, as water temperatures warmed and the fish moved to deeper parts of the lake, DCCO diets shifted to other species including gizzard shad and the invasive round goby.

Other studies have documented that the birds focus their foraging in shallower areas and consume nongame species like sticklebacks and sculpin. Still other research has shown perch’s vulnerability to mercury and other contaminants, as well as competition from introduced species. It would appear the finger of blame for perch problems cannot be pointed solely at cormorants.

Another area of concern to wildlife biologists is the DCCO’s effects on habitat.

A gregarious species, cormorants will congregate in large numbers whenever they find conditions to their liking. Given their substantial size, along with their equally substantial, shall we say, “output,” cormorants can create quite a negative impact on vegetation below nests and roosts. Their acidic feces kill the trees and herbaceous plants, in effect ruining the habitat for everyone but themselves.

Throughout the DCCO’s range, states have enacted various measures of control, including oiling eggs to prevent hatching and shooting birds deemed nuisances. In 2013, a combined total of 21,312 DCCOs  were shot in Indiana, Michigan, Minnesota, New York, Ohio, Vermont and Wisconsin, according to U.S. Fish & Wildlife Service statistics. And in 2014, in South Carolina, hunters shot 11,653 of the birds during a special DCCO season that ran from February 2nd to March 1st.

Were the hunts necessary? It depends on who you ask. So many factors and so many opinions from so many interest groups weigh in to the decision that the entire issue turns murky. Which is probably why the USFWS in 2006 decided to hand over much of the responsibility for cormorant control measures to selected state and local agencies.

For an absorbing, and well-balanced, look at the topic of DCCOs and their impacts, both positive and negative, you might want to check out the book The Double-Crested Cormorant: Symbol of Ecological Conflict.  Edited by outdoor writer Dennis Wild, the book provides a thorough examination of the bird’s natural history, its poor public image, and what the future may hold for this perplexing species.

Perhaps instead of, or in addition to, reading, you’d like to head out and observe some local cormorants. You usually can find them foraging at several select sites along the Fox River, typically near dams, as well as many local ponds, including  Fermilab’s Lake Law and A.E. Sea.

At least so far, no one around here is shooting cormorants or oiling their eggs. Maybe, just maybe, they’ll have a chance to live happily ever after.