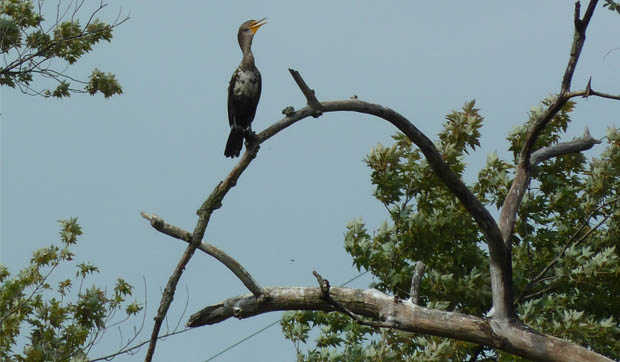 A little creepy and a little kooky, double-crested cormorants are an increasingly common sight along the Fox River as well as assorted local ponds. Here a juvenile, identified by its lighter plumage, sunning on a warm day.

Right about now, you’re probably fighting the urge to snap your fingers, hum along, and fill in the rest of the verse with “…The Addams Family.”

But, just this once, try substituting -and I know this is a mouthful: “Phalacrocoracidae.” Or, in English, The Cormorant Family.

Specifically, we’re talking about Phalacrocorax auritus, the double-crested cormorant: That creepy, kooky, mysterious and spooky bird that is popping up all along the Fox River, as well as select marshes and assorted neighborhood retention ponds.

Most people, upon seeing this bird in our area, do a double-take. Is it a loon without white markings? A black goose that perches in trees? Is it an anhinga, that southern bird known for perching with its wings spread wide?

The answers to these questions, in order, are: No. Nope again. And almost, but not quite.

Double-crested cormorants, or DCCOs, in birdspeak, have their own family but are closely related to anhingas. Both are primitive diving birds well-adapted to their ecological niche, which is consuming fish.

Anhingas, though, prowl the depths and stalk their prey before stabbing it from the side with their pointy bill. DCCOs, on the other hand, use powerful legs and webbed feet to chase after their fishy quarry, which they then snare with a bill that is hooked on the end.

Also like anhingas, DCCOs do not have a lot of preen oil-the compound responsible for giving the feathers on ducks and other waterfowl their water-resistant qualities. At first this might seem like a disadvantage, since DCCOs end up soaking wet every time they dive and swim. But if you think about it, this lack of water repellency is actually quite helpful. It prevents the birds from becoming buoyant and lets them pursue their prey with greater speed and agility.

The only issue comes when it’s time to leave the water. Like wet clothes, soggy feathers can stay that way for a long time, unless they’re spread out to dry. That’s where the birds’ characteristic posture, with wings outstretched, comes in. It’s a little creepy, and a little kooky, but, bottom line, it’s functional, at that’s all that matters.

Cormorants tend to hang out in groups, and the sight of multiple dark birds perched in a tree, oriented toward the sun, wings akimbo, can be a little mysterious and spooky. Even raven-like. In fact, the latter part of cormorant’s genus name, -corax, means raven, and the name cormorant is a contraction of the term “corax marinus,” or raven of the sea.

Odd birds that they are, cormorants are not without their charms. Though their plumage is predominantly black, the birds have bright yellow-orange skin on their face and neck. Their eyes, if you can get close enough to see them, are a gem-like aquamarine, and during breeding season the inside of their mouth turns a deep Caribbean blue. It’s also during this period that the birds develop their namesake double crests – wispy plumes, one behind each eye.

Remember how Morticia Addams speaking French would drive Gomez wild? Cara mia! DCCOs also perform a number of elaborate courtship rituals, including wing waving, water dances and the delivery of nesting materials that can include sticks, vegetation, rope, nets and other debris.

Though breeding season has now passed, there are still plenty of interesting cormorant behaviors to observe – and plenty of places to see them. One popular hangout is in a dead tree on the east bank of the Fox River in Batavia, as Good Natured reader Carl Eberle can attest. He called last week to describe the space and the birds hanging out there. Head to the bike bridge between Wilson Street and the dam, and look up from the north side of the bridge. Chances are the cormorants will be there, looking down at you. Other likely places I’ve come across are Boy Scout Island in St. Charles and the retention pond by the Judicial Center at Peck Road and Route 38.

We’ve got lots more stories and information to share, but these will have to wait until next week when we explore some of the controversies surround these fascinating birds. In the meantime, I hope you get a chance to see ’em. They really are a scre’em. The Cormorant Family.

Editor’s Note: The Batavia tree referenced in this column was cut down on July 17.