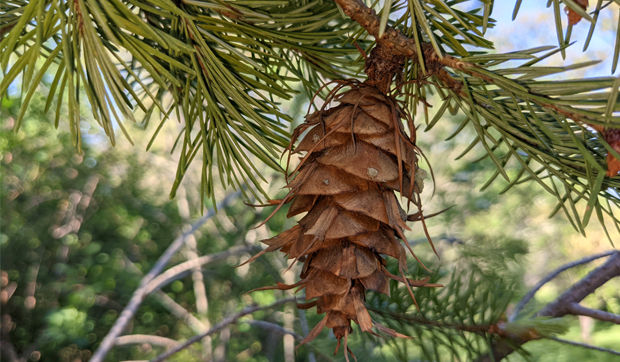 The tail-like bracts protruding from the cones of the Douglas fir serve as a handy identification trait, as well as a subject for folklore.

So a few weeks ago I came across an old notebook from the year 2000, when I was just beginning my career transition to full-time naturalist. As I flipped through the pages, I was amazed at a) how much better my handwriting was 20+ years ago, and b) how much I still rely on the info gained way back then.

Early on I’d jotted down the famous poison ivy verse, “Leaves of three, let it be,” but several pages later I’d proudly added, as evidence of my advanced learning, “Berries of white, best take flight.” I went on to note how the waxy berries are packed with nutrients and serve as an important later-summer food source for bluebirds, catbirds, woodpeckers and many southbound migrants.

During a class on confusing green plants I noted, “Sedges have edges, reeds are round; grasses are hollow from node to ground.” Just the other day I found myself rolling the stem of a grass-like plant and, feeling the “edges” of the triangular-shaped stem, knew I was looking at some member of the family Cyperaceae, the sedges.

About a third of the way through the notebook, as I was learning about conifers, I jotted, “Pines in Packages; Spruce are Single and Square; Fir are Flat” –all in reference to how their needle-like leaves grow. But then, in the margin next to fir, I had written the words “Douglas mouse tail cones.”

As useful as those other notes were, I could not make heads-or tails-out of this cryptic notation. For one thing, Douglas fir trees are somewhat uncommon in our area. They don’t naturally occur here, so if you see one, it’s because a human planted it in a yard or park-or you’re shopping for a Christmas tree.

I let this mouse tail mystery drift to the back of my mind, but it didn’t stay there for long. Last weekend while visiting with my friends Kim and Steve, touring their fabulous native plant gardens, Kim just happened to mention that the evergreen growing above the pond was…you got it…a Douglas fir. Toward its top, several cones dangled in the afternoon sunlight, their stringy bracts poking out like…mouse tails!

(Before we go any further, it’s my sworn duty as a Nature Nerd to point out that botanists don’t include Douglas firs in the Abies, or true firs, genus. A Douglas fir’s cones hang below the branches and remain intact when they fall; the cones of true firs, by contrast, stand above the branches and fall completely apart when it’s time to distribute their seeds. Such differences vexed early scientists and the Douglas fir’s classification changed 21 times before 1867, when it was placed in the genus Pseudotsuga, or false hemlock.)

As I looked at those cones, my brain started to, ever so slowly, connect the dots from a few weeks prior…fir-tree, flat-needles, Douglas-mouse-tail-cones…A-HA! The memory of a naturalist relating Native American lore about Douglas fir cones sheltering mice bubbled up from the depths. At that moment, the details were sketchy. But that night, at home with my friend Google, I was able to finally put it all together.

Not one but two Douglas fir stories arose from the indigenous people of the Pacific Northwest. Try as I might, I couldn’t pin down the tribes that originated them, but both pay homage to the cones and their “tails.”

One version tells of a horrendously long, cold winter. A mouse took shelter underneath a Douglas fir, where he was protected from the wind and cold, yet he had nothing to eat. The big and apparently talkative tree took pity on the mouse and told him to climb to the top of its branches and feast on the seeds inside its cones. The little mouse thrived on these gifts from the fir tree and it wasn’t long before the other mice in the forest noticed. They followed him to his food source and started eating, but this angered the tree and it slammed its cones shut, trapping the mice inside. To this day, the legend goes, you can still see their tales sticking out.

The other narrative tells of a great fire sweeping through the forest. Other animals were able to outrun the flames, but the mice, with their tiny legs, realized they were doomed. They asked a Douglas fir if they could take refuge among its branches, and the tree graciously offered them the spaces between the scales of its cones. Once again we learn that the tails of those mice are still visible to this day.

You’d think I’d be content now that the mouse-tail puzzle is solved. But no. On another page of the old notebook, dated 8/1/2000, during a walk at Tekakwitha Woods Forest Preserve, I wrote in the margin, “Chicago Sun Club.”

I thought perhaps the quick scrawl was a reference to prairie enthusiasts. But no. The Google says it is, or was, a social group for individuals “pursuing a clothing-optional lifestyle.”

I have a feeling the note has to do with a remark someone in class made about the words naturalist vs. naturist. But I’ve got more digging to do…and I won’t quit until I discover the naked truth.