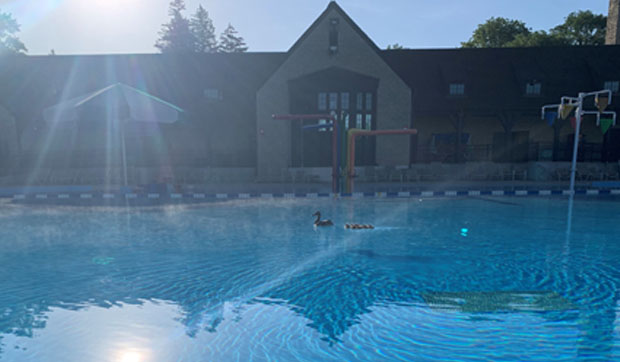 Mama Duck Luna takes her ducky family for a swim at Swanson Pool.

Sometimes a nature column practically writes itself. This, happily, is one of those weeks.

Our story actually starts over a month ago, when I received a text from Rosie Edwards, the supervisor who oversees operations of Swanson Pool at Pottawatomie Park in St. Charles. She and her staff were wondering what they should do about the nest they had found in a corner of the women’s locker room.

For humans, this open-air space offers a nice, natural setting in which to store clothing and other accoutrements before proceeding to the showers and pool. But for wildlife, which in this case was a female mallard, the natural setting comes with the added benefit of being virtually predator proof. Sure a few large mammals wearing swimsuits and staff t-shirts might occasionally happen by. But the real threats like mink, raccoons and other nest predators are kept several feet of stone wall away.

So back in April this mama mallard-dubbed Luna by the pool staff-gathered leaves, a wrapper from an energy bar and a mask (she is, after all, a pandemic parent) and tucked them into a quiet corner of the locker room/atrium. With the pool still closed to the public, Luna enjoyed a seemingly uneventful interlude of depositing eggs at a rate of one a day; then, as waterfowl do to ensure expedient hatching, she waited until all 11 eggs were laid before starting to incubate them on or around May 2nd.

The one hitch in her plan was that the quiet corner she’d chosen as a nursery also happened to be right next to a downspout. Luckily for Luna, we had only a handful of significantly rainy days in May. But when it did rain-you know I have to say this-it poured. Especially on May 26, when we got nearly 2 inches.

Having waterproof feathers and warm, insulating down, Luna did okay during the deluge. But what about those developing eggs? We wondered, and maybe worried a bit, about them getting wet and cold, but also trusted Luna, who of all of us was the one with the most experience, as well as instincts, to weather the storms and come out okay.

Ah, but then a purely human factor came into play. It takes somewhere in the neighborhood 28 days to make a batch of baby ducks, and knowing what we did about Luna’s egg-laying, we realized there was a good chance her brood was going to hatch right in the midst of Memorial Day weekend-which was also Swanson Pool’s opening weekend.

Staff carefully roped off the maternity corner and put up a sign stating, “Mother Duck Luna Nesting! Please do not disturb ?? Thank You!!” Still, would Luna’s brood pick that busy date to pop out of their shells?

Visions of ducklings and their panicked mama quacking amid curious little human-lings with their own potentially frightened mothers (I did once have a woman ask me if a duck she saw was rabid) floated through my brain, to the point where I told Rosie to text me if she or her staff needed help controlling any fowl chaos.

But you know what happened? Nothing.

Saturday, Sunday and the holiday Monday passed uneventfully, as did that Tuesday May 31. In fact on Wednesday June 1 Rosie and I started having some doubts. Did the eggs get too wet and/or too cold? Would the blessed event never come to be?
That evening though, a little before 7 p.m. (just as I was tucking into a big bowl of panang chicken curry during dinner with some friends) Rosie texted a video with the joyous words, “They’re hatching!”

Being a bit of a chowhound, it took me 20 minutes to respond with an all-caps “YAAAYYY!!!!!” Worse, it took me two hours to see Rosie’s final question of the evening: “Will they be okay if they are in the locker room overnight? Staff needs to lock up.”

The answer to that question was yes. But I didn’t anticipate Mama Luna’s next move which, introspect, now seems obvious. As the sun dawned on the new day, she herded her brood to the kiddie pool.

Rosie let me know of that development around 8 a.m. and said they were fine for the time being, but that they’d need to be out by the time that area opened at 11. Not exactly sure of Luna’s intent, or my own ability to be helpful, I nonetheless headed over with a few supplies: a plywood board that might make a good ramp; a soft net; and a towel.

As it turned out, none of those items were needed because, once again, Luna knew exactly what to do. She first shepherded her little family to the big pool, staying safely clear of the lap swimmers, and paddled around a bit. Then, almost as if she could read, she quacked and scolded the ducklings out of the pool and through the bushes to the gate labeled Emergency Exit. We opened it for her, and off they went toward the Fox River and unchlorinated freedom.

I can’t say for sure what happened after that. Survival rates for mallard ducklings are all over the place, from less than 10% to more than 70%. But as we noted time and again, the mallard hen we knew as Luna definitely knew what she was doing. I like to think that, as far as she’s concerned, everything’s just ducky.