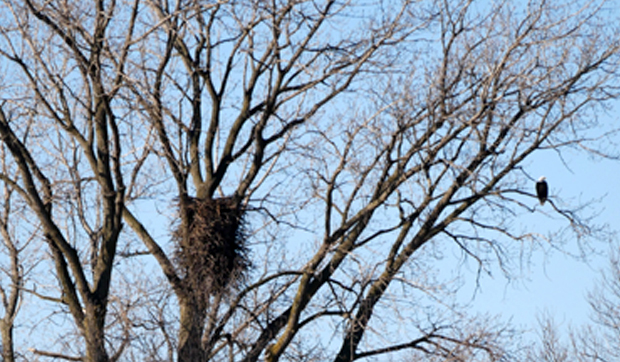 After just one year of construction this bald eagle nest in northern Illinois already measures several feet in height.

From a distance it looked like a Volkswagen Beetle slung upside down in a tree. An old-style Bug, that is. Dark brown in color. Oh, and made of sticks.

My friend John McFarland first told me of the structure-which is, by the way, a bald eagle nest-last spring. At the time we thought we’d meet out by the nest “sometime soon” and watch the activities of the two eagles who built it. But I waited too long to pick a date and the next thing I knew it was summer. And even though it was Covid Summer, it still flew by too fast.

Finally, in late fall, we managed a meeting along a country road a few hundred yards from the nest. John, his wife Bobbi and I admired the structure from a distance while one of the builders eyed us from a branch which, incidentally, also sort of functioned as the nest’s front porch. Or maybe back porch. It was hard to tell which orientation they had in mind.

But they definitely had picked a prime location, habitat wise.

Three out of the four cardinal directions offered sweeping views of rural Illinois-a landscape that abounds in farm fields but also offers buffers of streams, meadows and woods and a widespread grid of backroads.

Thanks to that diversity, food options are plentiful for this pair of Haliaeetus leucocephalus–science-speak for “white-headed sea eagle”–and to whom, from here on, I’ll refer to as Mom and Pop. They might choose to grab a takeout meal in the form of fish from the river or opt to dine in at a pop-up Roadkill Cafe. (Speaking of, this feeding option is readily available at this time of year. I’ve received quite a few calls about dead roadside deer turning drivers’ heads as bald eagles, red-tailed hawks, coyotes and other animals take turns feasting at the buffets, which do not take reservations.)

When we talk about habitat for wildlife, we generally consider the quality and availability of four components: food, water, shelter and space. Between the small river that was nearby as well as the occasional incident of road mortality, Mom and Pop should be able to feed pretty well. Water isn’t a problem either as the river’s flow makes it less apt to freeze. Shelter is plentiful thanks to the trees that border the farm fields and waterways, and space-the room they need to move around-is abundant too.

The space surrounding this particular eagle nest has another unique feature, and I can’t help but wonder whether it influenced Mom and Pop’s decision to build where they did. Not too far away from the nest’s back porch-or front porch-is a shuttered quarry.

In its day this industrial site was abuzz, and a-boom, with activity as rock materials were harvested, crushed and hauled away. It was noisy and dusty and likely kept other forms of human encroachment, like housing developments and shopping districts, at bay.

Now the vast expanse is quiet, which I’d imagine is how Mom and Pop like it. They’ve been able to work on their nest for the better part of a year now, bringing in branches that might measure as long as six feet as they add to the nest’s height and width.

John commented that it’s grown significantly since he first spotted in last spring. It isn’t, and won’t be for a while, as big as some of those legendary eagle nests that have been in used for years; those can measure 12 ft. high and weigh more than 2 tons. But it’s still mighty impressive.

The true test of their workmanship, though, is yet to come. I should probably have mentioned that the full name of this couple is Mom and Pop To Be. For the past year or so this young pair has been making preparations-“playing house” as one naturalist friend once explained it-before actually going ahead and starting a family.

In our area mating usually takes place in mid-February and the egg or eggs-clutch sizes vary from one to three-follow starting in five to ten days. Incubation lasts 34-36 days, then it’s 24-7 care for the nestlings for about the next three months.

As they grow, the young will push the nest to its limits. Like all birds, the offspring will grow quickly and will be the same size as their parents in 10-14 weeks. So if Mom and Pop produce, say, two eaglets and both survive to fledging, the nest will need to accommodate about 50 lbs. of bird when the whole family’s home.

And because bald eagles are a species with high nest fidelity-which basically means they’re home bodies-Mom and Pop will continue to add to their Volkswagen in the sky each nesting season. I hope John and Bobbi and I will be monitoring its, and their, progress for many years to come.