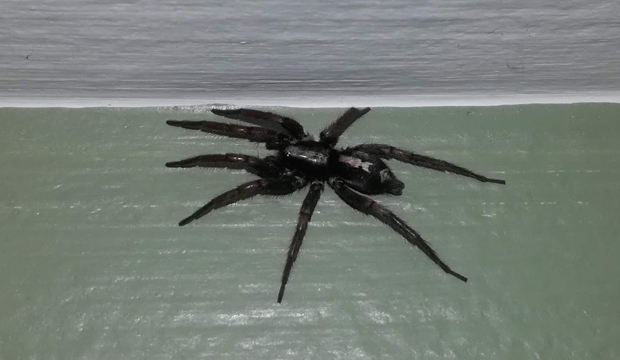 Photo Caption: ‘Tis the season to find eastern parson spiders indoors. This female measured about 1.5 inches in length, including her 7.5 legs.

As the temperatures start to cool, don’t be surprised if a parson comes to your door.

Actually, he, or she, might instead come to your window. Or the gap in your weatherstripping, or the crack in your foundation. If you’re really lucky she, or he, might decide to get comfy and stay awhile.

I know this because, right this very moment, my home is home to at least two parsons–a male and a female in, of all places, my bedroom.

I have to admit, I felt like a third wheel the other night as I came upon Mr. and Ms. Herpyllus ecclesiasticus. Decked out in somber black, with light-colored accents-the clerical collar-like markings that give eastern parson spiders their name-they seemed to be engaged in some sort of getting-to-know-you dance when I toddled in.

Any thoughts of going to bed early vanished as I decided to observe what sure looked like the start of a courtship ritual. Ah, but then I committed what was to be the first faux pas of the evening. I got too close, too soon, and Mr. Parson vanished.

At this point I should probably mention, parson spiders are very fast. With a zig and a zag-their characteristic movement pattern-the Mr. vanished, moving so quickly that I couldn’t be exactly sure where he ended up. Was he down behind the baseboard? Under the dresser? Even with a flashlight I couldn’t find him.

His hasty retreat meant that the substantially larger Ms. Parson was left to deal with the pajama-clad intruder on her own. She pivoted a bit and, I think, shot me an eight-eyed glare, then did what these spiders do best: she ran away too.

Unlike her Mr., however, Ms. Parson stayed visible. Her skedaddle took her to an upper corner of the room, near a clump of what I believed to be abandoned web.

Thinking the spider would feel secure up there near the ceiling, I decided to take advantage of the situation and snap a few photos. And that’s when faux pas no. 2 occurred.

I reached up to move a dust-laden strand of silk and immediately became aware that those cobwebs–which I swear I’ve been meaning to knock down–weren’t abandoned at all. They were Ms. Parson’s hideaway. As I pulled on the web I activated every warning bell in her tiny spider brain. Quick as lightning she ran into the center of the tangled mass, tucked herself tightly into the corner and shielded her body with her legs.

Having now scared the daylights out of not one but two parsons, I realized it was time return to my regularly scheduled activities and let the spiders get back to theirs. But as I brushed my teeth, I pondered. As I flossed, I mused. And when I crawled into bed, I Googled.

What had me thinking so hard, at a time when my brain really ought to have been slowing down instead of ramping up? It was that web. Eastern parson spiders are members of Gnaphosidae, the ground spider family. And as such, they are ambush predators-that is, they actively hunt their prey rather than spinning and monitoring a sticky web.

Yet there sat Ms. Parson, up in the corner of the room, looking quite at home surrounded by a tangle of spider silk. (My mind flashed briefly to that scene in Gone With the Wind where Mammy accuses Scarlett, who’s dressed in black mourning dress after the death of her first husband, of sitting and waiting for Ashley Wilkes “just like a spider.” I worried just briefly over Mr. Parson, should he decide to resume their rendezvous, before going back to my own web…as in world-wide…)

It turns out, this sort of behavior is pretty typical for ground spiders. While they don’t spin webs to aid in feeding, they do create “silken lairs,” as the references say, by running silk between fallen leaves, loose bark or, sometimes, the folds of clothing stored in dark drawers or closets.

Eastern parsons are a bit unusual in that they are one of a small handful of spiders in our area that can pierce human skin. The bite isn’t considered medically significant but some people react to it more than others. As you bring your turtlenecks and sweaters out for the season, it’s not a bad idea to give them a shake, lest you disturb a parson at rest as you tug that tog over your head.

One more thing… If you find a parson has come to visit and you’d prefer it went away, go ahead and show it the door. But only if it’s still relatively warm out. Once we get into late fall and winter, the temperature difference between indoors and out will be too great, and the spider will not survive.

But if you find a parson and it’s cold outside, don’t fret. They actually make pretty good house guests. They’re nocturnal, so they’re not often seen. They feed on insects and even other spiders, so they earn their keep, quickly yet silently, all winter long.

Ecclesiastes, the Old Testament book, teaches us that everything has a season and a purpose; a time to keep, and a time to cast away. I don’t want to put words in its chelicerae, but I’ll bet ecclesiasticus, the species, couldn’t agree more.