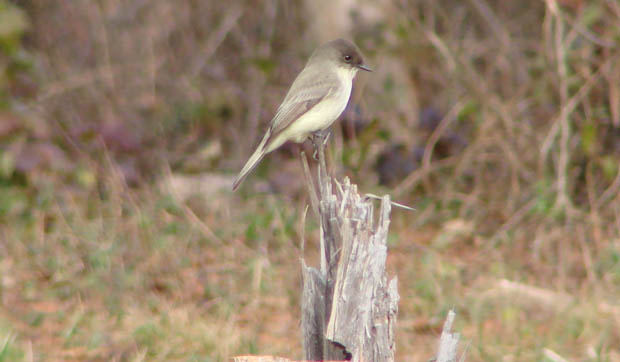 Small and gray, eastern phoebes might at first be confused with their flycatcher cousins. But the distinctive habit of dipping its tail, combined with the male’s song the says his name, “FEE-be,” make this perky bird relatively easy to identify. (Photo credit: mrmac04 at Morguefile.com)

Throughout these many months of cold we have endured, I’ve tried to help my winter-weary friends stay positive. After every new dump of snow I’d point out, in what I hoped was a sunshiny voice, “Hey, at least there are no mosquitoes.”

When another blast of arctic chill would blow in from the north, I’d reach down deep, channel some Shirley Temple cheer, and note that, “Gee whiz guys, at least we don’t have any ticks.”

But now that spring is here, even I have grown tired of my cold-weather counsels. It’s time, darn it, not only for mosquitoes and ticks, but also for wasps, moths, beetles and flies.

Although they’re not the most colorful of the spring bird species (can anything compete with a male blackburnian warbler, resplendent in his breeding plumage?) I just can’t help but smile when a phoebe flies by.

Sayornis phoebe is a member of the Tyrannidae, or tyrant flycatcher family. Described as “paralyzingly, drearily nondescript ” by the experts at Bird Watcher’s Digest, many species of flycatchers can cause so-so birders like me to growl in frustration, and contemplate the destruction of otherwise completely fine binoculars.

Not so the phoebe.

Grayish above, lighter below, with maybe a wee tinge of yellow on the belly, they don’t scream for attention the way a bright red male cardinal or a canary-colored male American goldfinch might. But, bless their little hearts, phoebes display one very definitive trait: They dip their tails.

If you happen to see a medium-sized, grayish songbird perched on a branch, look for this distinctive pumping motion. If you see it, you’ll know you’ve found yourself a phoebe.

While you’re watching, be sure you’re listening, too. Because eastern phoebes offer us one other unmistakable characteristic: They say their name.

The phoebe’s song is a two-note “FEE-be” or “fee-BE,” put forth in a raspy yet emphatic tone. Sometimes the little guys will try to trip us up with a stuttered “fee-b-be” or even “fee-b-b-be” but the message is still the same: “No doubt about it, I’m a phoebe!

(Note: Another common bird in our area, the black-capped chickadee, also sings a “fee-bee” song. But in contrast to the hoarse-sounding phoebe, the chickadee’s song is a clear, high-pitched whistle easily imitated by humans. Also, we have lots of chickadees in our area. When one sings “fee-bee,” a song that declares territory, you’re apt to hear another chickadee answer in return. With phoebes, a “fee-BE” response is less likely.)

We’re in the midst of breeding season now, and phoebes far and wide are seeking out suitable nesting habitat. As male phoebes sing their name to declare their territory, females can be seen gathering moss and mud, which they’ll use to construct a bowl about the size of a robins nest. They prefer a location with protection from the elements and can often be found building on porch posts and pillars in picnic pavilions.

I know some people aren’t thrilled when animals set up housekeeping so close to human homes. But phoebes aren’t freeloaders! Anyone lucky enough to have a phoebe construct a nest on their house or garage can look forward to months of free insect control provided by their own resident flycatchers.

With warmer temperatures predicted for the coming week, it looks like spring might finally be here to stay. The weather outlook calls for a chance of rain, but the forecast for insects is 100%. Wasps, moths, beetles and flies, butterflies and dragonflies, and yes even mosquitoes will be out and about. Ticks and spiders too.

Thank goodness. Because just like our April (and beyond) showers have brought us May flowers, the bugs of spring mean feasts for birds in flight. Keep an eye out for spring migrants as well as summer residents like bluebirds, martins and swifts, for barn swallows and cliff swallows, bank swallows, northern rough-winged swallows and tree swallows.

And, oh yes, the eastern phoebe.