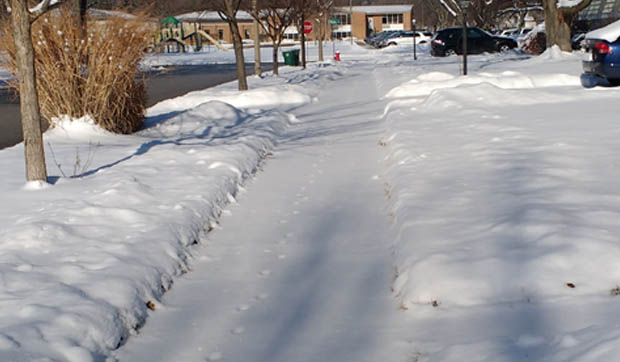 Photo Caption: The tracks that proceed straight down the middle of this sidewalk show how, especially in winter, coyotes can be masters of efficiency. Not as step was wasted as the individual moved from north (top of photo) to south.

The other night my dog Joey and I decided to take advantage of the (comparatively) warm weather and head out for a walk. The plan, at least as far as I was concerned, was to get a little fresh air, shake off that cabin fever we’d been suffering from, and maybe get a little exercise in the process. Fifteen minutes tops, I thought.

What I got instead was an hour-long odyssey of exploration of our local environment. Joe was intent on sniffing an innumerable amount of interesting smells in the grass, on trees and at the base of fire hydrants. (Apparently we weren’t the only human-dog pairs who decided to get out and enjoy the warm spell.)

I, meanwhile, practiced some night-time tree ID. Never hurts to reacquaint with the silhouettes of old friends like the linden, honey locust and willow. I also, when it was quiet, strained my ears for the calls of our local great horned owls. But I heard nothing, which was a stark contrast to their continued hooting around the holidays. (Their courtship finished, the pair has moved on to the next stage-reproduction. Mama Owl is busy sitting on eggs; the last thing the pair would want now would be to call attention to their nest site. And so the silence.)

Anyway, as we wandered, slowly, around the neighborhood, I couldn’t help but wonder what our trail would have looked like had there been snow. Off to the left, off to the right, back and forth and around at the spots where something was particularly intriguing. Then there were the half-dozen times I got tangled up in the leash as Joe went one way and I another.

Economy of motion has never been one of our strong suits. Clearly, we’re not coyotes.

As we walked along in a repeated series of stops and starts, I recalled a picture I’d taken last week, when there was still snow on the ground. That particular morning I’d tottered out to bring in the garbage can and had the good fortune to find a near-perfect set of coyote tracks, smack in the center of the sidewalk, right in front of my house. Better still, there were no other footprints from man or beast to detract from the perfect alignment of pawprints, one after another, in a straight line heading from north to south.

It was so remarkable, I just had to stop and capture it for posterity with my cell phone camera.

Coyotes-in fact, many of our wild neighbors-face a delicate balance during the winter months. They need to maintain a certain body temperature, so their internal furnace, a.k.a. metabolism, is raging. They fuel it with calories that, in the coyotes’ case, come from many sources.

Mice and voles, rabbits and sometimes even deer factor into that equation, but so too does our human trash. Coyotes will scavenge our scraps, and also hunt the animals drawn by the scent of those leftovers. Indeed, I don’t think it was a coincidence that those tracks showed up on garbage pick-up day.

Okay, back to the whole economy-of-motion thing. Besides finding calorie-rich food sources, coyotes also help keep their furnaces stoked by conserving energy expenditures. Instead of meandering to and fro, the way Joe and I wandered that same sidewalk, the coyote moved forward with as little excess motion as possible. Rear feet came down on top of where front feet had landed, a style of movement known as direct register. And judging by the space between the tracks, a measurement known as stride, the individual was moving at a brisk, but not frantic (and energy-wasting) pace.

This trait of walking in a straight line is really useful, not just for coyotes and foxes, but for people too. That is, people who like to follow tracks.

One of the most frequent questions we get when out on hikes at Hickory Knolls is, how do you tell a dog track from a coyote track? It can be tricky, especially when a trail is well trodden with footprints of all sorts. But if you can isolate the steps you’re interested in, and follow them for a distance, you’ll be able to discern what animal left them with surprising accuracy.

If they proceed in straight-as-an-arrow fashion, chances are they were left by a coyote or a fox. But if they squiggle about, hither and yon, with lots of backtracking and seemingly little thought to forward progress, they likely were left by a domestic dog that knows s/he has a big bowl of kibbles waiting back home.

And if those higgledy-piggledy canine tracks are accompanied by a set of bootprints, chances are near 100% you’ve come upon the trail of a nature nerd and her dog. Maybe even Joey and me.