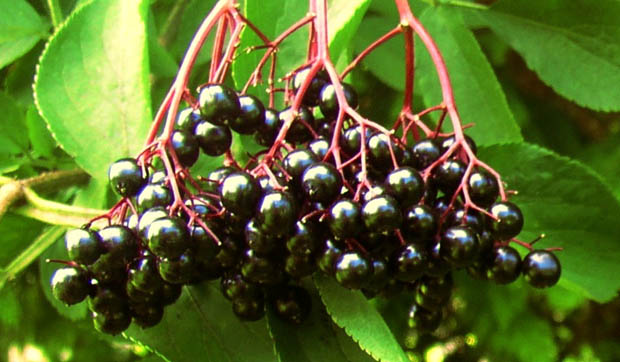 Elderberry shrubs are sagging with ripe fruit that is a preferred food source for many species of birds, and certain people too.

Given what I’ve been up to lately, I’d get it if you thought I was a Brewster.

Old movie buffs and high school theater veterans might recognize the name as that of the family in Arsenic and Old Lace, a classic dark comedy that features Abby and Martha Brewster and their nephews Mortimer, Teddy “Roosevelt” and Jonathon. The plot features all sorts of quirky twists and turns but at the center lies its silent star: elderberry wine.

Spiked with arsenic, the beverage is Abby and Martha’s way of “helping” what they see as despondent bachelors leave their lonely lives and go to the great beyond. (My favorite character, Teddy, aids in the effort by burying the bachelors-whom he believes are yellow fever victims-in the “Panama Canal” he is digging in the cellar. He also yells “Charge!” every time he runs up the stairs, a la Roosevelt charging up San Juan Hill. True confession: I do too, when I’m particularly hopped up about something.)

Now I don’t have any arsenic and my house has no cellar, but I do have a ton of elderberry bushes. They were loaded with blossoms earlier in the season and now they’re sagging with dark purple berries ready to be picked. The birds-who actually are why I planted the shrubs in the first place-have helped themselves to plenty, and now it’s my turn.

Armed with scissors and a stockpot, I headed out to the Sambucus nigra Canadensis hedge (which used to be bush honeysuckle, a nasty invasive) and started snipping the large clumps of fruit.

What’s great for nibblers like me is that elderberries by themselves aren’t really all that tasty. They’re tart, even bitter, and have a decent-sized seed in the center that adds unwelcome crunch. So unlike the times my Grandma would send me out to pick strawberries and I’d come back with a full tummy but a sad and nearly empty bucket,  my stockpot soon held several quarts of shining black soon-to-be goodness.

As I clipped away I realized I wasn’t the only one prowling amongst the elderberries. As I harvested along the south side of the yard, a very annoyed catbird called from the bushes on the north side. I don’t speak Dumetella carolinensis but I’m pretty sure the bird’s whiny mews translated into something like “Hey! Those are mine!” and probably included some spicy comments about humans’ greedy and thieving nature.

I’ve enjoyed having catbirds in the yard every year since the elderberries were large enough to bear fruit. But that individual’s admonishments got me wondering, what other animals benefit from these prolific plants?

According to illinoiswildflowers.info, bird species that find elderberries irresistible include cedar waxwings, eastern bluebirds, northern mockingbirds, American robins, house finches, wood thrushes, red-eyed vireos and white-throated sparrows. The plant’s insect associates are many and include including honeybees and several families of native bees, flies and beetles. I was also happy to note that various turtle species snack on the berries too, so I made sure to grab an extra bunch for Arthur my ornate box turtle.

Back inside the house, I cleaned the berries from the stems using a wide-toothed comb, rinsed them and divided them into two batches. One, destined to become elderberry syrup, is bubbling away on the stove as I write. Once it’s done I’ll cool it, strain it and add honey and some spices for a great homemade elixir.

The other berries await a more dramatic fate. That’s right, inspired by Abby and Martha Brewster, I’m taking a crack at making elderberry wine. I’ve got all the necessary equipment and ingredients-minus the arsenic-and a whole evening to crush, boil, cool and get the fermentation process started. But time’s a-wastin’, so back to the kitchen I go. Charge!