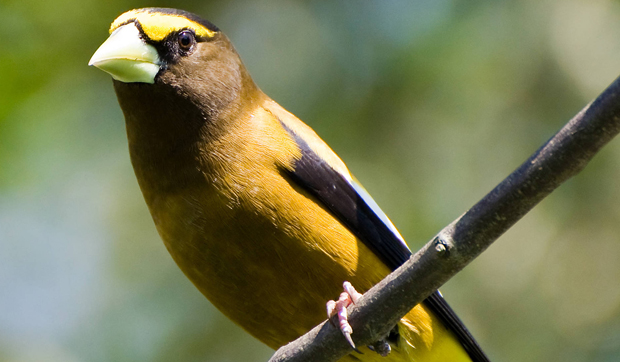 Evening grosbeaks are one of several unusual birds showing up as part of a major irruption, or influx, of species from the north. (Photo courtesy of Gentry, George, USFWS)

Generally speaking, eruptions attract a lot of attention. There’s no mistaking when a volcano blows, or a crowd expresses its views. Or when a facial blemish pops up, usually on a day of major importance. (“With this zit, I thee wed…”)

But irruptions? They can happen and create barely a ripple. In fact, we’re in the middle of several right now, and I’ll bet you haven’t even noticed.

Well, I take that back. If you’re a birder, you’re well aware of what’s going on around us. But as a birder, you’re also apt to keep quiet about such things, so as to not disrupt the birds and their behavior.

So for everyone else out there, look! Up in the sky! It’s a bird! And another bird! And dozens more!

Ecologically speaking, an irruption is “a sudden increase in an animal population.” And what we’re seeing in northern Illinois right now is a sharp increase in the numbers of certain types of birds, specifically, seed-eating birds from the north.

Driven south by a precipitous drop in their preferred food-conifer seeds–pine siskins began arriving in our area a couple of weeks ago. They’re lively little birds for sure, and are traveling in large groups. So you’d think they’d be easy to spot.

But the thing with pine siskins is, they superficially resemble American goldfinches. Both species have prominent wingbars and a yellowish cast to their plumage. And at birdfeeders both display a preference for nyjer or “thistle” seed.

It can be easy to confuse the two until you start to look more closely at some specific details. Although goldfinches and siskins are of similar size, the pine siskin casts a slimmer profile. It’s also quite streaky on its breast and back, whereas the chunkier goldfinch is clear-that is, devoid of markings.

Their bills are quite different too. By necessity the pine siskin’s bill is longer and more slender-all the better to pluck seeds from cones.

While you’re weighing the differences between pine siskins and American goldfinches, be sure to keep an eye out for a few other small, seed-eating species that also are irrupting this year: common redpolls, purple finches and red-breasted nuthatches.

Common redpolls are streaky like pine siskins, but lack the yellow coloration and sport a jaunty red forehead patch; in addition, males wear a “vest” of pinkish feathers on either side of the breast.

Meanwhile purple finches look, to my eye, a lot like our very common house or “Hollywood” finches. But experienced birders will point out that the purple finch is a little heftier and that the red on the male is a bright raspberry hue, as opposed to the less intense “strawberry” red of the male house finch. Also, purple finches show plain white feathers underneath their tails, while those of the house finches are streaked.

If you grapple with telling these two birds apart, you’re not alone. And believe me, I feel your pain. But with purple finches here in larger numbers, this may be the year we can all learn to distinguish between them.

Thankfully, red-breasted nuthatches look nothing like either of these finches and should be easy to pick out in your yard or at your feeders-especially if you have conifers and are offering suet. These birds exhibit many of the same upside-down feeding behaviors of their cousins the white-breasted nuthatches, which live here year-round, but are smaller and have a peachy blush on the breast. They’ve also got a white eyebrow and a bold black line through the eye-hard-to-miss markings that help confirm their ID.

So far the irrupting species we’ve been talking about all bear some resemblance to local birds you’re likely familiar with. But there’s one more bird to watch for that’s, as they say on Sesame Street, not like the others.

The evening grosbeak is large finch-close to robin-sized-and doesn’t really look like any of our “usual” backyard bird species. Males are yellow and black with a bright splash of white on the wings; females are a more subdued gray with black and white wings and distinctive wash of yellow on the back of the neck.

But the feature you’ll find most noticeable is that called out in its name. Grosbeak is a combination of the French words “gros,” or “big, fat” and “bec” or “beak.” These birds use their big, fat beaks to crush seeds, like striped sunflower, that smaller birds struggle with. In fact, it’s not uncommon to see species like pine siskins and redpolls gleaning the crumbs grosbeaks leave behind.

As 2020 draws to a close and we take stock of its many notable happenings-a pandemic, for one, and a presidential election that won’t soon be forgotten-be sure to add the appearance of these delightful bird species to the list. And while you’re at it, be grateful that we’re in the midst of an irruption, not an eruption. Then again, the year’s not over yet…