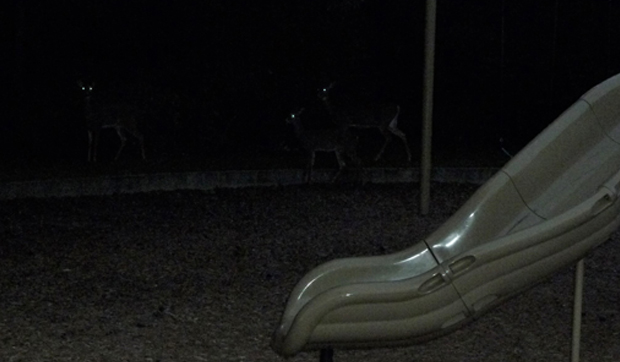 Photo Caption: Three white-tailed deer frolic after dark on the playground at Delnor Woods Park in St. Charles. Meanwhile a mystery creature, indicated by the eyeshine near the top and center of the photo, looks down from a nearby tree.

Any way you look at them, our winter holidays really shine. Twinkling decorations shimmer in yards and windows; nights-some of them, anyway-are clear and starry; and right in the midst, on December 30, we were treated to a full moon that–when you could see it–added a luster of midday to objects below.

But the other night, driving down Anderson Boulevard in Geneva, I was reminded of another type of shine-one you can enjoy all year round, provided you have a light source and a little luck.

I’m talking about eyeshine. It’s the phenomenon whereby light reflects from an animal’s eyes, creating a bright glow. If you’ve ever tried to take a flash picture of your sweet Fifi and Fluffy, only to have the photo portray them as a green-eyed glowering demon from below, you’ve experienced eyeshine.

In my recent experience, the light source was car headlights, and the animal was a raccoon. It was hard to miss, seeing as it was about the size of a bear cub, and it was crossing Anderson in that quick but lumbering gait  raccoons have perfected. I slowed down-not that I’d want to hit it, but my actions were as much to preserve my car’s alignment as the critter’s well-being. It glanced briefly toward my car and its eyes shone brightly from the front of its bulky, hunched silhouette, then it disappeared into the dark shadows of a yard and was gone.

Eyeshine occurs when light reflects off the tapetum lucidum, a layer of tissue behind the retina in many nocturnal animals. (Neat fact: “Tapetum lucidum” is Latin for “bright tapestry.”) It reflects light back through the retina to the eye’s photo receptors and improves night vision-a handy function for creatures that normally would navigate by stars and moonlight. But our brighter, manmade lights enhance the effect, often to startling degrees.

I remember a warm night last summer. I was in the middle of a nocturnal jaunt of my own and was looking for a familiar shortcut through a small field. The only trouble was, I had never walked that area at night and my human eyes, which are not well adapted to low light conditions, could not find the narrow footpath.

This small trail, a few hundred feet long, saves literally a mile of walking–when I can find it. I paced back and forth a few times, hoping against hope the rods and cones of my retinas could help my brain discern where to head in. But no luck.

Finally, I resorted to a naturalist’s cardinal sin: I turned on a flashlight. It was the one on my phone, which I reserve for emergency use only, but that didn’t lessen its effect. The bright blaze of light immediately destroyed whatever night vision I’d managed to build up.

Perhaps more significantly, it showed that I wasn’t alone.

As the light illuminated the field in front of me, I noticed several pairs of eyes shining back at me. Judging by their height from the ground, as well as their quick movements and a faint outline of erect ears, I’m pretty sure I stumbled on a family of coyotes. Mom out with the young’uns, teaching them the finer points of vole hunting, was my guess. Rather than disturb such an important lesson, I gave up my quest for the shortcut and added another 20 minutes or so to my walk. (That “long way around” took me along the side of a very busy road. I had to once again resort to the light of my phone, this time for my own safety. Human eyes do not have tapeta lucida and do not produce eyeshine in headlights.)

Under some circumstances, eyeshine takes on a color, from red to orange to yellow or green. (“Red-eye effect,” by the way, is a similar occurrence but is not the same as eyeshine.) Some folks say you can use this color to help identify species-in fact there are many online guides that list such correlations-but I’ve found that there are too many variables involved. The angle of the light source can affect the color, as can the type of bulb; humans’ individual perceptions of light at night also play a role.

I find that paying attention to other cues is more reliable. Is the animal staying still? Are the eyes a few feet above the ground? Probably a deer. Are the eyes moving in response to the light? Probably a predator trying to escape detection. Are you near a pond? Eyes shining from atop the water, in our area, usually are frogs but down south can also indicate an alligator.  Are there teeny-tiny eyeshines, close to the ground? Yippee, you’ve found spiders!

We’re on the verge of a brand new year-hallelujah!-and with it comes a chance for new beginnings:  Lose those extra covid pounds, quit those quarantine-induced bad habits, focus on health and well being. But I’d like to suggest one more. Some evening soon, grab a flashlight, head outside, and make 2021 your year to shine…for eyeshine…