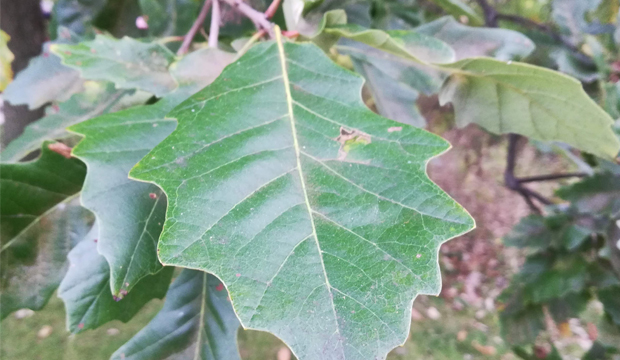 Thanks to warmer-than-usual temperatures, many trees held onto their green color–that is, their chlorophyll–until late October this year.

The other day I went to write a check was confronted by a skill I’ll probably never master: how to remember what day it is.

There’s something about that first line on the check, the one that says Date, that causes my mind to go completely blank. It doesn’t matter how many times I’ve seen what day it is-on the front of the newspaper, the time/date display on the TV news, the top of the meeting agenda-that little combination of month and number simply doesn’t stick.

We could go on today to explore my issues with time in general, and my deep-rooted inability to stay on schedule, but this being a Good Natured column, we’re going to go in a different direction: to trees. Because trees have dates I know…or at least thought I knew.

One big one is October 15. For as long as I’ve been creating nature programs-more than 20 years-we’ve always cited October 15 as the date for Peak Fall Color here in northern Illinois.

We’d schedule field trips around that date; we’d plan festivals to coincide with it. We knew, from past experience, that by then the temperatures would have started to cool. Some years we’d even have had a frost or two. The dropping temps combined with shorter days would start the trees’ preparations for winter.

The leaves would stop producing chlorophyll-the green pigment that makes photosynthesis, or the making of the trees’ food, possible. As the green faded away, other colors like yellow and orange-courtesy of pigments called carotenoids-appeared. Some tree species upped the ante with pigments called anthocyanins and start showing off vivid reds and purples.

During our scheduled walks and talks, we’d explain these processes in more depth, and crowds would ooh and aah at the colors like spectators at a fireworks display.

But this year? October 15 came and went and I-go figure-didn’t even notice. We had no fall color-specific programming planned, which was good because our trees looked pretty much the same as they did all summer.

Yes, the days have continued to get shorter. But our weather, until recently, stayed unseasonably warm. In the absence of those “typical” cooler temperatures, many trees carried on as if they were in the midst of a very long growing season. Their leaves kept producing chlorophyll and, on sunny days, kept photosynthesizing.

Adding to this phenomenon was this year’s weird pattern of precipitation. We had a very dry spring, and pretty dry summer too. True, we did have some rainstorms. But driven by wind and sometimes accompanied by hail, those precious drops crashed against the baked ground and, mostly, ran off into ditches, streams and storm drains.

For trees that like wet, or at least moist, feet, 2021 was a bust. By October 15 the ground beneath species like sycamore, willow and cottonwood is littered with dry leaves. But many other types of trees-our oaks, maples, lindens and elms, to name a few-gamely carried on.

Then, starting in mid-September they started getting the water they’d lacked, served just the way they like it: via gentle, soaking rains. This needed water, combined with those warm temperatures and allowed the leaves to keep producing chlorophyll and, on sunny days, keep photosynthesizing.

So now here we are, with October 15 well in our rearview mirrors and November 1 just around the corner. The trees will do what they need to survive, conserving nutrients and moisture as they head into that long, dormant phase we call winter. And we humans will do what we can with whatever fall color we can observe.

Actually, I’m already looking ahead to the next big date on my tree calendar: March 15. That’s the day that, traditionally, marked trees’ peak sap flow. It was a time when we’d gear our programming toward the art and science of tapping maple trees, collecting the sap-which contains those nutrients produced by last year’s leaves-and boiling it down into golden, and tasty, maple syrup.

You’ll notice though that I inserted that word traditionally. And I spoke of maple tapping programs in the past tense. That’s because this past March-March 3, to be exact-I tapped the silver maple in my backyard. By sunset on March 4 I had the 10 gallons I needed and on March 5 I had pancakes with fresh, 100% pure maple syrup for breakfast.

Next year’s sap flow will commence on when the proper conditions of warm-ish, above-freezing days and cold, below-freezing nights occur. I’d very much like to tell you when that will happen, so you can plan accordingly. But I just don’t know the date.