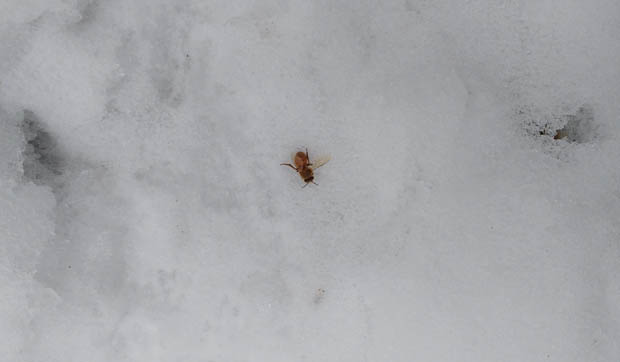 Dead honey bees in the snow – casualties of cleansing and scouting flights – are a sure sign that a bee tree is nearby.

Last week we took a look at the secret lives of honeybees – how they work through spring, summer and fall in order to produce enough honey to get them through the winter. We promised, at the end of that column, that this week we’d supply you with tips on how to find active bee trees in local parks and preserves, even your own backyard.

What we left out, though, is the exact nature of those “tips.” “Drips” might be a better way to describe them.

Honeybees make honey from nectar they collect from flowers. (It’s a relationship we all recognize. But did you know that the flowers offer up that sweet liquid for the sole purpose of attracting animals like bees? Nectar is produced in special organs called nectaries. Just like a confectionery produces confections so that people will stop and buy, nectaries produce nectar so that pollinators will stop by.)

Nectar consists mainly of water and sugar and comes out of the flower as a thin liquid. It is transported by worker bees (known as field bees) back to the hive in a structure called a honey sac, a little internal “bucket” that is an extension of their esophagus.

Inside the hive, other worker bees known as house bees receive the nectar from the field bees and deposit it in beeswax cells where, through a combination of enzymatic action and evaporation (thanks to the house bees’ fanning of their wings) …ta-da! Honey is made.

In winter the bees tap into this rich energy source, along with the pollen they’ve also gathered, whenever they need to fuel up as they work their muscles to generate the heat required to keep their queen warm.

It’s a pretty good system, darn near perfect, in fact. Except for one thing.

There’s a law of nature that states something like, “Everything that eats, excretes,” and honeybees, sweet as they are, are no exception.

I know what you’re thinking. Surely, with their well-developed architectural skills and advanced social system, honeybees must have some sort of provision for relieving themselves inside the hive, right? I mean, even chipmunks – rodents that they are – excavate little “bathroom” chambers in their burrows. Certainly a colony sophisticated enough to have a queen would also think to have a throne.

Alas, bees have no such arrangement. Compounding matters is the strict code by which all worker bees must abide: There’s no pooping inside the hive.

My. What’s a poor honeybee to do?

The answer is deceptively simple: They hold it.

That’s right. This winter, when the cold winds whip through the woods, the honeybees are inside their bee trees, holding it.

When the gray skies dump inch upon inch of snow, the honeybees are hanging in there, crossing their little bee knees. But then, when a sunny, warmish day comes, look out – it’s potty time!

Like miniature bombers the bees emerge, intent on dropping their loads anywhere from a few to several feet away from the hive. These trips, known as cleansing or defecation flights, produce the “drips” – mustard-colored blotches in the snow – that are the “tips,” or clues, you can use to track down a wild honeybee colony.

Not to digress too much, but there are some researchers who believe that the cleansing flights also function as scouting flights, during which the bees look for fresh food sources. Of course many individuals perish during these flights, overcome by the cold temperatures. But sooner or later – in this area, usually in March – their efforts are rewarded. That’s the time of year when tree species that are wind pollinated begin to bloom.

The pollen from these tiny flowers can provide the bees with a much-needed supply of fresh protein, just the thing to rev the bees up for the coming spring.

So there you have it. Some day this winter when there’s fresh snow on the ground, go for a walk in the woods. Look for a tree with a hole in it, then look down. If you see tiny yellow blotches, accompanied by few frozen bees, you’re in luck. You’ve found yourself a bee tree. Just remember (and to rephrase some song lyrics by Frank Zappa):

“Watch out where the honeybees go,
And don’t you eat that yellow snow.”