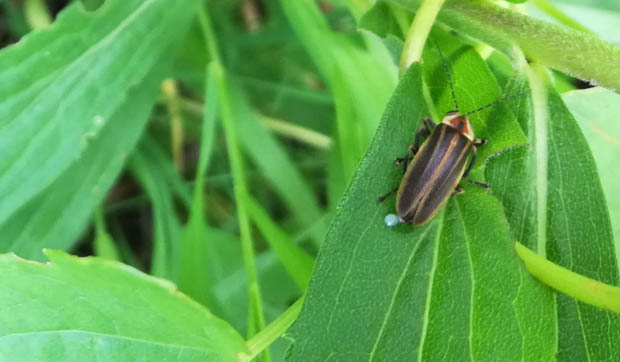 A Photuris firefly wiles away the daylight hours on a goldenrod leaf, waiting for its time to shine.

For almost a week now-since 10:54 a.m. on Friday June 21– it’s officially been summer. Unofficially, it’s also firefly mating season, a last hurrah for these insects that have spent most of the last year or two under rocks and logs, living as predacious larvae that feed on earthworms, slugs and other invertebrates.

That’s right folks. What is arguably our area’s most famous group of insects starts life in a most understated fashion, prowling damp soils and mosses for invertebrate prey. At this stage of life they look nothing like their familiar parents, other than the faint yet constant glow they emit from their abdomens. They pupate in late spring and then…

Game on! Adult fireflies have only a few short weeks left to live, which is not much time to a) find a mate and b) procreate.

Right now, in yards, parks and crop fields throughout the area, determined male lightning bugs are taking to the air right around dusk, flashing their flamboyant displays and hoping to catch the eye of an available female.

Meanwhile, down on the ground, the females wait and watch. Should one see a male with an aerial exhibition she finds appealing, she’ll flash back in a species-appropriate way. Seeing this favorable response, the chosen male will make a beeline (or, more correctly, a beetle-line, since fireflies are beetles, not bees or flies) down to the ground.

With his target clearly in sight, neither (gentle) rain nor heat nor gloom of night will stay this courier from his appointed rounds as he seeks his blinking beauty. In fact, the warmer and more humid the evening, the better, as far as the fireflies are concerned. If the female continues to respond, the male will continue his pursuit, and the flashy courtship will go on, sometimes for an hour or more.

If all goes well, mating occurs and both parties depart, she to begin the process of depositing eggs, he to find another partner, and both presumably live happily ever after. But even for fireflies, there are no guarantees.

In the firefly world, danger exists in the form of femmes fatales, large females of the genus Photuris that prey upon the smaller males of the genus Photinus. These sly sirens mimic the flash responses of the other species’ females to lure in their unsuspecting victims. As the male approaches what he believes is a potential partner, he meets instead with an impassioned impostor, who promptly tears him limb from limb.

Scientists believe femmes fatales act the way they do to not only increase their nutrient intake, but also increase their toxicity. Photinus species contain a bitter chemical that works to deter predators. By consuming that toxin, Photuris females themselves become bitter tasting and deter their own predators. After these females have eaten their fill, they switch their flash patterns to that of their own species, lure in males, and let nature take a more predictable course.

It’s not hard to observe this and many other firefly feats, right here in the Tri-Cities. Just head outside as the sun is setting and keep your eyes peeled for the following:

– Photinus pyralis, our most common firefly; emits J- or U-shaped arc of greenish-yellow light
– Photinus marginellus, a tiny firefly that prefers forest edges; emits small dots of light
– Photuris lucicrescens, our largest species; hovers in one spot and emits light in a crescendo

To turn the fun up a notch, take a small flashlight with you and try to mimic the patterns of light that you observe. Imitate the males to elicit a flash response from a female on the ground, then emulate females’ flashes to attract a male.

Better hurry, though. The insects and their light displays will only be around for a few weeks at the most. Then they’ll be gone…in a flash…