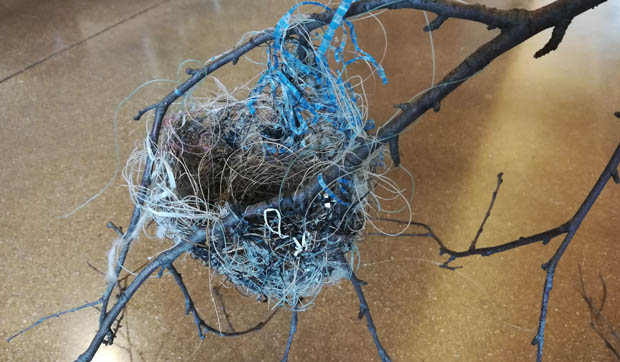 Growing up in a family that loved to fish, I’ve seen my share of bird’s nests. And not the good kind.

In fishing parlance, a bird’s nest is an irreversible tangle of fishing line. It happens when you reel in line that is slack, when you’re stripping out old line, or when you’re just not paying attention. Either way, you end up with a jumbled mass of line, and one unhappy fisherperson.

Or fisherpeople. My cousin and I were frequent angling companions and, as kids, became rather notorious for the whoppers, of snarled line, we’d create when we’d try to prove we were old enough to use our uncles’ fancy gear. And I can still picture the doozy birdnests that resulted when I tried, in spectacularly unsuccessful fashion, to use my dad’s classic casting reel.

But you know what’s even worse? When actual birds make actual bird’s nests out of fishing line. In their case, the consequences are steep.

In our area especially, where the Fox River and its dandy smallmouth population draw fishermen out daily, discarded fishing line is as common as Asian clam shells along the riverbanks. I’m not sure how this happens, because most outdoor sportsmen are great conservationists. Nevertheless, fishing line waste, sometimes with the hook still attached, is a fact of river life.

While we see this litter as, at most, a minor annoyance, to certain birds it’s the equivalent of the lumber aisle at Home Depot. Those species that would normally fly far and wide to gather grasses and other plant fibers seem unusually attracted to the translucent lengths of line fishermen leave behind.

(Just a note about line types: I’m not sure whether those fishermen who use braided line are really good about cleaning up after themselves, or if they are just very few and far between. But the line I find left behind is nearly always monofilament-the kind that looks like clear thread, but is way tougher.)

I’m not exactly sure why birds choose fishing line over the natural materials their species has used for thousands of years. But I have a theory. Breeding birds are under a lot of pressure, especially during a spring like we’re having now. The weather has been awful yet their internal clocks are ticking a seasonal countdown towards the rearing of young. But first the eggs need to be laid. And before that can happen, the nest needs to be built.

For birds nesting along the river, those traditional plant fibers and grasses can be a distance away. But the fishing line? It’s right there!

I also wonder if the line could be serving as a superstimulus for some birds. That is, they see the fishing line as an exaggerated version of the natural materials they normally seek. If a long plant stem is preferred, wouldn’t even longer monofilament be better? If strength is the desired quality, isn’t stronger likewise better?

I suppose in some ways, fishing line might seem like the perfect building material. In fact it’s nearly indestructible. What could go wrong?

As it turns out, plenty. Have you ever tried to break a piece of fishing line with your bare hands? If so you know how incredibly strong it can be. It might stretch, it might slice into your skin, but unless it’s really old and degraded, it’s not going to break.

Now consider that the average songbird weighs somewhere between 1 and 3 oz., and that the lightest fishing line commonly available is 2 lb. test. (Never mind that many weekend warriors choose 20 lb. test, just in case they hook The Big One.)

If a human can’t break through that line, what do you think is going to happen to a bird whose foot gets entangled as it’s weaving its nest?

I can tell you, it ain’t pretty.

But rather than focus on the negative, I’d like to suggest we make some chicken salad out of what might otherwise be chicken shhhaving cream. With the weather finally getting nicer, a lot of us are going to be heading out for a stroll along the Fox River. While we’re out there, looking at birds and bees and trees and, hopefully, sunshine, let’s not forget to look down, too. And pick up any line that we see.

You know what’s even better? We can recycle the line we find. Monofilament recycling containers can be found up and down the river. Look for them near boat launches and other popular fishing spots.

And if you can’t find one, don’t despair. Berkley, a leading manufacturer of fishing gear, operates the Berkley Conservation Institute and recycles fishing line. You can mail your collection to:
Berkley Recycling
1900 18th Street
Spirit Lake, Iowa 51360

Let’s make 2019 the Year of the Bird’s Nest-the good kind. And keep used fishing line where it belongs-in a container, to be recycled.