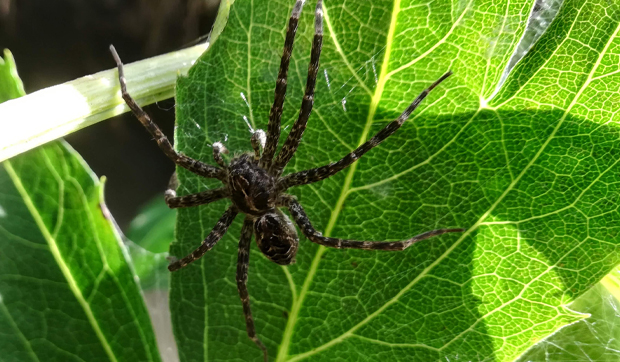 The faint white W markings on the abdomen identify this spider as Dolomedes scriptus, the striped fishing spider.

Every year when Mother’s Day rolls around, Hallmark reminds us just how many animals are great moms. We see cards with dogs and their puppies; cats with their kittens; a polar bear and her cub.

But just once I’d like to see some cards featuring some of nature’s lesser-known, but still great, moms. How about one with a female alligator delicately carrying a hatchling in her toothy maw? Or a picture of a rattlesnake watching over her neonates, and those of her neighbor too?

Or maybe a nice close-up of our local nominee for Mother of the Year, Momma Dolomedes, the female fishing spider.

I know Mrs. D, if I may call her that, doesn’t exactly look all warm and fuzzy. Well actually, maybe she does. Fuzzy, anyway. But she’s a member of the family Pisauridae, the nursery web spiders, a group whose maternal instincts rival that of any vertebrate mother I can think of.

Let’s start at the very beginning. The eventual Momma D began her life a year ago, in a nursery web created by her own mother. She overwintered as a juvenile and resumed her duties of feeding and growing once things warmed up in spring. She fed on insects and other arthropods and as she got larger may even have tried her hand (claw?) at catching small fish and tadpoles. As she matured to her adult size (a body length of just over an inch and a leg span of over 2 1/2 inches) she was wooed by a mate, a daring male who likely did not survive the courtship.

After mating, Momma D would go on to produce upwards of 1,000 eggs, enclosing them in a silken egg sac. Which is pretty much what every other spider skittering around on Earth does. But rather than leave the egg sac in a web where it could get predated (many bird species love to feed on spider eggs, which are easy to find and don’t fight back) or even cart it around on her behind, attached to her spinnerets, a la wolf spiders, she carries it with her chelicerae and pedipalps.

Let’s stop right here for a minute and consider those last few words. Chelicerae is the fancy word for jaws, and pedipalps are the pair of little leg-like sensory appendages all spiders have. These are located at the front of the cephalothorax (sometimes called the prosoma), which is yet another fancy word for the combination head-and-thorax all spiders also have.

Jaws and palps are essential for spider feeding, yet Momma D’s are occupied with precious cargo. And so it is that she goes without food the entire time her eggs are developing. I can’t say exactly how long this period is but it’s upwards of a week. Days and days of not feeding, simultaneously trying to avoid predators, whilst also toting her developing family.

If she were human we’d call it devotion. But she’s a spider, so it’s just business as usual.

When she senses the first eggs starting to hatch, Momma D enters her next phase of motherhood. She spins a tangled mass of silk and places the egg sac inside. This web is the nursery after which the family is named. It’s thick enough that the tiny spiderlings are somewhat concealed, but still quite conspicuous. To ensure her offspring, for which she’s starved herself, survive, Momma D then stands guard until it’s time for them to leave, up to another seven days or so.

Two weeks ago I was lucky enough to run into one of our local Dolomedes, D. scripta, during a field trip at Otter Creek Bend Wetland Park in St. Charles. Fifteen fifth graders and I had just completed our exploration of the marsh and were headed into the creek when I saw her, basking on a leaf of cut-leaf coneflower.

Her posture stiffened noticeably as I approached the plant, which arced gracefully away from the creek bank and out over the water. She reared up slightly as the fifth graders-the offspring of 15 other mothers-scrambled into the creek, splashing and squealing. She then flattened her body against the leaf and stayed that way through 1, 2…8 clicks of my cell phone camera before retreating protectively to the other side of the plant.

For it was there that her treasured brood-hundreds and hundreds of wee tiny spiderlings-toddled about their nursery web. I could practically hear the lullabies lilting above the meshy complex of silk and saw with my own eyes how when the wind blows the cradle really does rock.

Thankfully the coneflower bough didn’t break and no spiderlings fell, at least not while we were in the creek. When I returned 10 days later I found no trace of the nursery or the family that occupied it. Momma D has moved on, and her offspring are off to make their way in the world, perhaps someday creating nurseries of their own.

You still have time to go out in search of your own Momma Ds. Before the first frost is when these spiders and their webs are at their largest. The species at Otter, D. scripta, tends to hang out near flowing water, while D. triton, the six-spotted fishing spider, likes slower currents, ponds and wetlands. There there’s D. tenebrosus, the dark fishing spider. Our largest Dolomedes, these impressive beasties can be found by water but also have a tendency to wander into moist woods, and basements.

Watch from a respectful distance and you’ll pose no harm to them, nor they to you. Take your own pictures, maybe even make one into a card. Mother’s Day, you know, is only 7 1/2 months away.