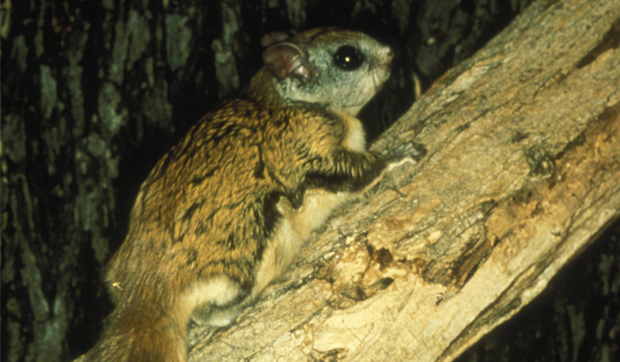 Photo Caption: Flying squirrels are fairly common in our area, but rarely seen due to their nocturnal habits. That animals prefer habitats that offer mature hardwoods like oaks and hickories…and/or birdfeeders.

Working as the park safety supervisor for the St. Charles Park District, patrolling our public lands late into the night, Tim Timberlake has had plenty of close encounters. But only recently did he come across a bona fide UFO. Yep, an unidentified flying object, right above the parking lot at Norris Woods.

Well, maybe unidentified isn’t quite the right word. Unbelievable is more like it. But the more Tim watched the small, shadowy form, gliding silently among the trees, the more he became certain of what he thought he was seeing. That’s when he called the Naturalist Dept. for confirmation.

“Am I crazy?” he asked, inserting a pause almost too good to pass up, “Or do we have flying squirrels here?”

The answer, oddly enough, is a resounding  “Yes!”

The southern flying squirrel, Glaucomys volans, is by no means common in the TriCities. But there are certain pockets around town, particularly in areas with mature woods, where you maybe, just maybe, can catch a glimpse of these curious nocturnal creatures.

Scientifically speaking, southern flying squirrels are members of the order Rodentia, the same taxonomic group as our fox and gray squirrels, as well as other rodents like chipmunks, voles and mice. In fact, their genus name, Glaucomys, is derived from the Greek glaukos, meaning silver or gray, and mys, or mouse. (The species name, volans, is derived from the Latin verb volo, which means to fly or move swiftly.)

Measuring about 8 to 10 in. in length (almost half of which is tail), a fully grown flying squirrel weighs just 3 oz.-about as much as much as my dogs’ fabric Frisbee. Interestingly, just as flying discs don’t actually fly, but glide thru the air on the force of a throw, so goes the flying squirrel. It propels itself off of a tree branch or trunk, then extends its forelegs and back legs to spread its patagia-furry membranes that run between the limbs-and glides to its next landing spot.

Foraging throughout the night, flying squirrels tend to cluster where food sources are rich. Nut trees-many of which are experiencing a bumper crop this year-are common haunts, as are backyard birdfeeders. But like most wild creatures, the flying squirrel’s diet changes seasonally. Tree sap and blossoms are fair game in springtime, while berries are consumed in summer. Mushrooms are also on the menu, with truffles ranking high on the list of favorites.

When it comes time to call it a night, flying squirrels will head home, typically to a tree cavity or other such cavernous enclosure-like a bluebird box, wood duck box, screech owl box…or attic. It’s this latter option that sometimes gets these guys in trouble.

Flying squirrels often gather in groups, especially in winter so they can conserve body heat. Being rodents, they also tend to gnaw to customize their home’s interior. And, like any of us, they’re reluctant to step outside to potty if they can do so in the relative comfort of the indoors. All of these qualities, piled together in the confined space of an attic, add up to a stinky, destructive group of houseguests that usually require eviction.

But you know what they say about an ounce of prevention… Now’s the time to repair broken vents and gaps in your eaves. Leaving them unattended to is like putting out the welcome mat for flying squirrels, bats and all other critters that can squeeze through tight spaces.

Another good measure is to trim tree branches so as to not have any near the house. Even though these little rodents can “fly,” they’re more likely to stay within the friendly confines of a tree if other options are difficult to reach.

Should you still find yourself with uninvited guests, please please please call a professional wildlife removal expert. Those Havahart traps that seem like such a good idea at the hardware store are actually really bad, for the critter and you both. Transporting and releasing an animal anywhere except your own property is a violation of state conservation laws; plus, let out in a strange new place, the animal has little chance of survival, especially this close to winter.

Okay, I’ll get off my soapbox now. Let’s assume your roof vents are in good repair and your eaves are gapless, but flying squirrels are still on your list of Things to See. If you’ve got a nice stand of mature oak trees, and maybe a bird feeder or two, look outside after dark. You might be surprised at what you see!

Or, go ahead and try your luck at Norris Woods. Head there at dusk and keep an eye on the tree limbs surrounding the parking lot. But be sure to keep your other eye on your watch. The park closes at 9 p.m.; stay after that and you may be setting yourself up for a close encounter of yet another kind…with Park Safety Supervisor Timberlake…

Pam Otto is the outreach ambassador for the St. Charles Park District. She can be reached at 630-513-4346 or potto@stcparks.org