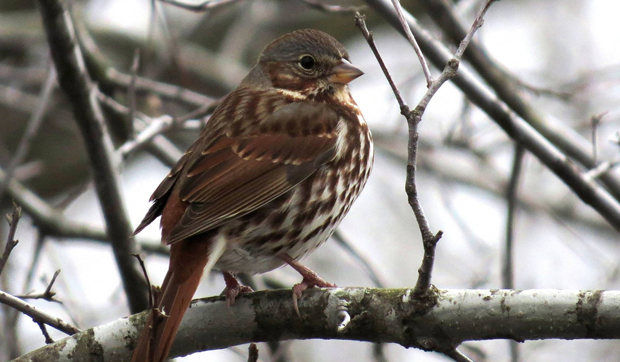 Fox sparrows in our area display a wash of ‘foxy’ reddish brown and are noted for their larger size and vigorous feeding methods.

Whether you’re a veteran birder or brand new to the hobby, or even if you barely give any bird a second glance, I’ll bet at one time or another you’ve uttered the statement, “Oh, it’s a sparrow.” Or, worse, “Oh, it’s just a sparrow.”

It’s true, many of us take sparrows for granted, tending to lump all little brown seedeaters into a single category regrettably dominated by a single species, the introduced and invasive English house sparrow. But all you need to do is look around to see that not all sparrows are created equal.

Take fox sparrows, for instance. Thickset and chunky yet light on their feet, they are the Chubby Checkers of the sparrow world.

If you were to line up some of the more commonly seen sparrow species in Kane County, fox sparrows would stand out for a number of reasons. For one, they’re large–at least by sparrow standards. Song sparrows, for example, (the birds you hear right now singing “Maids, maids, maids, put on your tea kettle, kettle, kettle) weigh in at around 0.7 oz. and measure 6 1/4 in. long. And the adorable little chipping sparrow (another species you might recognize by its song, a prolonged trill that sounds like a squeaky ball bearing) is only 0.4 oz. and 5 1/2 in. long

Meanwhile, fox sparrows tip the scales at over an ounce, a veritable ton for a songbird, and are over 7 in. long. But what really makes these guys stand out is their unique foraging style.

Whereas most sparrows are content to pick seeds from a feeder, or delicately scratch on the ground below, fox sparrows actually do their own version of The Twist. They turn and hop, peck and jab, all the while kicking up leaf litter like there’s no tomorrow.

In fact, it was this distinctive feeding style, described as “vigorous” in field guides, that caught my attention just the other morning.

Sipping coffee and trying to clear the cobwebs (figuratively, of course; wouldn’t want to destroy that great habitat on the kitchen ceiling) I noticed a disturbance in the backyard. Though my eyes were still sleep-blurred, I could see leaves and twigs being tossed amid a flurry of feathers. Two more sips of coffee and a pair of binoculars later, the creators of the commotion were clear: Three chonky fox sparrows were underneath the elderberry, having breakfast.

Chances are the menu that morning was a mix of plant material as well as invertebrates waking up for the season. In winter, the birds feed primarily on seeds while in the summer breeding season they shift their intake to include many insects and spiders, which provide protein and fat for adults and nestlings alike.

As I watched the birds feed I thought back to the first time I’d seen-or, rather, heard-fox sparrows doing their thing. It was a quiet afternoon in late fall, and I had the Hickory Knolls woods to myself. I became aware of a great deal of rustling in the woods and fully expected to come upon a squirrel foraging in the underbrush. But no it was, you guessed it, fox squirrels intent on finding the best tidbits the leaf litter had to offer.

I had to look closely because at first the birds resembled another woodland species; their heavily speckled breasts had me thinking thrushes. But then I got a closer look at the birds’ stocky build, and their conical bills-a sparrow hallmark-and I realized my error. But as is so often the case, making a mistake is the best way to learn; I’ve been able to identify fox sparrows ever since.

I would have liked to have observed my backyard trio a lot longer, but my arms got tired of holding the binocs and then, worse, my coffee got cold. Most important though, I too needed to do some vigorous foraging before I headed out to start my day.

If you’d like to spot some fox sparrows of your own, look for shrubby, wooded areas with lots with lots of leaves or other plant material on the ground. Morning and evening, just before sunset, are good times to catch these characters displaying their vigorous feeding techniques.

But you’d better hurry! Even now fox sparrows are leaving our area and heading north toward their breeding grounds northern Canada and Alaska.

If you should happen to see one, or two or three, count yourself lucky. And instead of saying, “Oh, it’s just a sparrow,” you can change your tune to “Oh! It’s a fox sparrow!” …a chubby bird with a twist all its own.