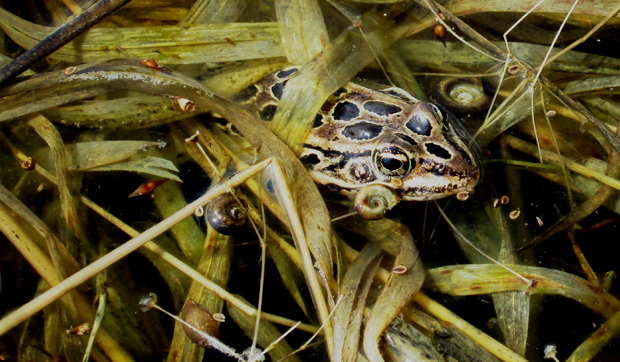 Good Natured: Hop to It! Become a Frog Monitor

I guess you could say I have a history with frogs.

For as far back as I can remember, I’ve chased after these guys, stalking them in ponds and streams, reveling in their frogginess. When I was five my Uncle Lyman caught me an enormous bullfrog; I named it Chris, after the enormous man who ran the meat department at Jewel, and took it to school for show and tell. When I was 10 I took it upon myself to catch and release 22 leopard frogs during our vacation in Michigan; only problem was, I caught them in the Menominee River but released them, accidentally, in the car on the way home.

I’ve sketched frogs, “hypnotized” frogs and raised frogs from tadpoles. I’ve watched frogs feed, and I’ve seen them get fed upon. Once I was even lucky enough to watch one shed its skin, a truly amazing process. (Okay, I first thought the frog was dying. It was a captive green frog, and it was puffed up like it had swallowed a golf ball. Using its front feet as though they were hands, it wiped and tugged and eventually pulled its outermost layer of skin off. The frog then stuffed the entire gooey, translucent glob into its mouth and swallowed it down in one big finger-lickin’ gulp.)

Granted, a lot of these frog adventures aren’t for everyone. It’s rarely, if ever, a good idea to take an animal from the wild, let alone transport it somewhere else. Shed frog skin looks a lot-and I mean a lot-like mucus. And finally, not all the “released” frogs met a happy end; somewhere out there there’s a 1966 Pontiac Catalina with a mummified amphibian in the seat springs.

But, thanks to the rapidly expanding field of Citizen Science, there is a way for folks even mildly interested in frogs to become better acquainted with these fascinating creatures. It’s called frog monitoring or, more correctly, the Calling Frog Survey.

Each year about this time, flocks of new monitors, as well as veterans looking for a little refresher course, gather at training sessions throughout the Chicago region. The all-indoor classes cover everything you need to know to become an official frog monitor: when to go out, where to go, what to keep track of and how to record and report your data.

The Calling Frog Survey, in a nutshell, is a do-you-hear-what-I-hear approach to population observation. Male frogs, as part of their breeding behavior, head to marshes and ponds and call to attract potential mates. As luck would have it, each species has a different call, and different species call at different times. Monitors learn how to head out, with a partner, to listen to these calls and record their findings.

Best of all, training session participants get to learn about frogs! The session PowerPoint includes pictures and audio of the 13 frogs thought to reside in the Chicago Wilderness region. Monitoring trainees learn what each species looks and sounds like, as well as the habitats each prefers.

The workshops also offer plenty of opportunities to learn cool froggy facts, like which species emits a pepper-like defensive chemical when alarmed; where on their bodies toads “drink” water (hint: it’s not with their mouths); and what the word amplexus means.

If all this sounds like too much to resist…we’ve got good news! There’s a Frog Monitoring Workshop coming to a location near you. The Forest Preserve District of Kane County’s session will take place from 6-8 pm on Wednesday February 6 at Waubonsee Community College’s Sugar Grove Campus. The workshop will be in the Science Building on the north side of the campus, with the room TBA. Registration deadline is February 1. To sign up, contact FPDKC volunteer coordinator Robb Cleave at cleaverobb@kaneforest.com or 630-762-2741

If that date doesn’t work for you, Hickory Knolls will host a session Saturday February 16, from 10 a.m. To sign up contact yours truly using the email or phone number below.

Even if your schedule doesn’t permit a commitment to a season of monitoring frogs, you might want to come just to learn more about these fascinating, and fun, amphibians. We guarantee-they’re a topic you’ll find ribbeting.