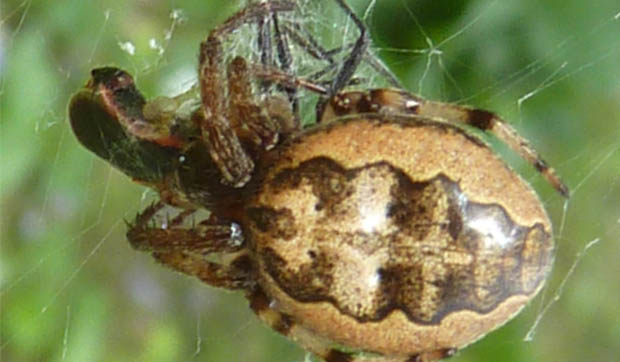 Photo Caption: The furrow spider is one of only a few local spider species that overwinter as adults. Its substantial size makes it especially well-suited to eating larger springtime insects; it can also serve as a sizeable meal for hungry birds and mammals.

I don’t think Mother Goose will mind if I paraphrase her work just a bit:

“Along came a spider
So I sat down beside her
And frightened Miss Spider away!”

Typically, when one encounters a spider outside in springtime, the creature is teensy. Or, to use the technical term, itsy bitsy. Small spiders weaving small webs and catching small insects-it’s one of the many hallmarks of spring in northern Illinois.

So imagine my surprise when, on Thursday, I encountered a spider, outdoors, that was every bit as big as the spiders we normally don’t see around here until late summer or early fall. There she was, with her half-inch body and half-inch legs-a whole inch of spider!-smack-dab in the center of her large orb web, placidly slurping the life juices from a boxelder bug.

So struck was I by her great size, and delicate beauty, that I had no choice than to sit down beside her. And while I did frighten her away, it was only for a minute. She scurried up one of the supporting rays of her web and tucked herself out of sight behind a dried plant stem. Then, apparently deciding that I was big and noisy but otherwise not a threat, she returned to her boxelder breakfast.

As she worked the carcass with her pedipalps, making sure to extract every last nutritious drop, my mind starting flipping through its Rolodex of possible identities for this new and wondrous creature. It was an orbweaver, for sure, which ruled out a good chunk of species but also left plenty more up for consideration. Except for one thing…

Every individual that came to mind was a summer species.  Araneus diadematus, the cross orbweaver, is extremely common in our area. But at this time of year, its young are just beginning to emerge from the egg sac in which they overwintered. Plus, this new girl lacked the prominent white cross marking that A. diadematus is known for.

It wasn’t long before I realized that I was going to need some help from BugGuide.net-my go-to resource for invertebrate i.d.-as well as assistance from my friend Google in order to get this mystery solved.

I stayed beside Miss Spider long enough to watch her attempt, and fail, to snare a bee that bounced in and out of her web, then I stood up, snapped a few quick photos, and headed on my whey.

Later that night, at home, I poured myself a tasty beverage, fired up the laptop, and began the spider research in earnest. On the BugGuide home page I typed the words “orb weaver” into the search box, then used the web site’s handy “Browse” feature to click through possible options.

It wasn’t long before I found a few likely suspects. One in particular-the furrow spiders, genus Larinioides-looked  particularly promising. I plugged that name into Google and after only a few more clicks found myself on another favorite “web” (nyuk nyuk 🙂 ) site, Spiderz Rule. The text at the top of the page read, in part:

“Furrow Spiders are common orb-weaver spiders often found around homes and other urban areas. Some furrow spiders are known to overwinter as adults: this is noteworthy because typical orb weaver species live for only one year, dying before winter. These species grow to about 1/2″ long.”

Now there’s always a chance that this tentative i.d. is way off base. Right at the start, BugGuide helpfully informed me that “There are approximately 3,500 orbweaver species worldwide, with 180 occurring north of Mexico.” That detail, combined with my somewhat limited knowledge of spider anatomy, and the fact that accurate identification often requires a look at spider body parts that are nearly inaccessible, causes me some concern.

But I’m willing to say, with a level of confidence that’s around 85%, that the creature I sat down beside is a furrow spider. If I had to pick a species I’d go with L. cornutus, because BugGuide says it’s more common in the eastern United States.

So why does any of this matter? Spiders, regardless of species, are important members of food webs worldwide. As predators, they consume all manner of creepy crawlies-insects and other arthropods of which we might otherwise have too many. As prey, they help sustain many of our favorite vertebrate species. Birds like wrens and chickadees regularly feed on spiders, and many other species use them to nourish their young. (Fun fact: Spiders are rich in taurine, an amino acid that plays an important role in many essential bodily functions.)

Furrow spiders, big as they are, can catch much larger prey than the itsy, bitsy spiders that otherwise predominate at this time of year. Likewise, furrow spiders’ substantial bodies can provide a hefty portion of much-needed protein for hungry birds and mammals, and maybe even an amphibian or two.

As we progress through spring, into summer and then fall, the number of spiders available to sit down beside will increase exponentially. I’m not sure how Mother Goose would feel about such a prospect, but I know another mother-Mother Nature-won’t mind at all.