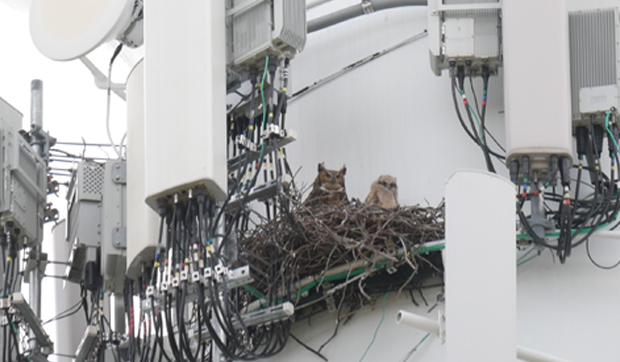 Photo Caption: Geneva’s association with great horned owls nesting in public locations spans more than a decade. It continues in 2020 with this family, whose home overlooks walking paths and an athletic field complex on the city’s west side.

Geneva, some of you might recall, has a bit of a history when it comes to owls. And no, I’m not talking about The Little Owl, may it Rest In Peace.

As much as I’d love just one more Owl Burger, or fish fry, or Arbizzani lasagna, the legacy I’m referring to is that of Bubo virginianus, the great horned owl. Back in 2005, a pair of GHOs caused quite a sensation in downtown Geneva by nesting in a tree on the north side of the courthouse on Third Street. Two owlets fledged that year; three more followed in 2006 (though one was later found dead); two again in 2007; and one in 2008.

Great horned owls have a lifespan in the wild that averages 13 years, so I have no doubt that many of these offspring, and their offspring-and their offspring’s offspring–are still active in the area. In fact, I know one for sure lives like a king.

Justice, as he’s now called, was part of the 2007 courthouse brood. My friend Kim G. spent a lot of time that year observing the owls, and was thrilled beyond words to one day witness an ambitious youngster take its first flight. One flap, two flaps, three flaps and then…bam! The little guy smacked into a courthouse window and fell into one of its deep window wells. Long story short, Kim called for help, the bird went Flint Creek Wildlife Rehabilitation in Barrington and, because the fall caused irreparable damage, then joined the ranks of Flint Creek’s awesome animal education team.

In 2012 or so, Geneva’s association with owls continued with the discovery of a nesting pair in a new public location-an oak tree near a picnic pavilion at Fabyan Forest Preserve. The tree had a hollow that conveniently faced the structure, offering shelter for the birds and wonderful photo opportunities for visitors.

These owls, too, returned year after year, unfazed by the crowds that would gather to watch the family feed, sleep and grow. But that show ended in July of 2018 when forest preserve district officials deemed the dead tree unsafe. With the owlets fledged and the nest once again empty, the tree came down amid the roar of chain saws and a clamor of comments, on Facebook and in real life, debating the merits of the decision.

I’m not sure where the Fabyan pair landed in 2019, but great horned owls are nothing if not resilient. I’m certain they’ve found another location, perhaps more private, that suits their needs.

So here we are now in April of 2020 and, guess what? Geneva has yet another pair of owls nesting in yet another prominent location.

This site, though, comes with a twist. It’s so prominent-and by prominent, I mean conspicuous, and visible for miles-that the owls actually are barely noticeable at all.

At this point I should probably mention that the birding community abides by a pretty strict code of ethics when it comes to disclosing the locations of rare species and nesting pairs. Descriptions of such sites are deliberately vague, to deflect the stress curious onlookers may cause the birds.

Yeah, I know, I broke that rule last week, when I gave out the location of the St. Charles mockingbird. (Shoot, I’ll do it again, for those of you who missed it. Seventh and Horne Streets, in the Davis School neighborhood.) I’ll defend that choice by saying the spot is extremely public to begin with, and with the stay-at-home order we’re under, I thought the bird might provide a nice distraction for people looking for something to do. (Many thanks to those of you who have come to see the unusual bird and who’ve practiced good birding etiquette. “We watched him for quite a while, then went back home to learn more about mockingbirds,” wrote one family. “Our science lesson for the day!”)

This week, however, I’m going to be a little more indefinite in my directions. Not only will it give you all something to think about as you shelter in place, or practice physical distancing, or wash your hands for the 20th time today, but it also will reserve the pleasure of seeing the owls for only those of you most determined to see them.

I’m neither a poet nor a riddle-writer, but here’s my stab at giving your brain a little exercise:

Two local owls answered nature’s call
By nesting beside a gigantic ball.
It holds 750,000 gallons of water inside,
And is a distinctive feature on Geneva’s west side.
If you cheer for the Geneva Vikings,
You will find this owl nest to your liking.

Try as I might, I couldn’t find a word that rhymes with binoculars, so I’m going to stop here with the poetizing. Suffice it to say, some sort of vision enhancement gear will help you get a clearer view of the Bubos and their bambino. Plus, if I happen to be there, we can compare makes and models, from a minimum 6 ft. distance.

Next week, we’ll explore more nearby nature and provide some additional ideas for getting outside while remaining socially responsible. In the meantime, be safe and be well my friends!

Pam Otto is the outreach ambassador for the St. Charles Park District. Her office remains closed but you can leave a message at 630-513-4346 or email her at potto@stcparks.org.