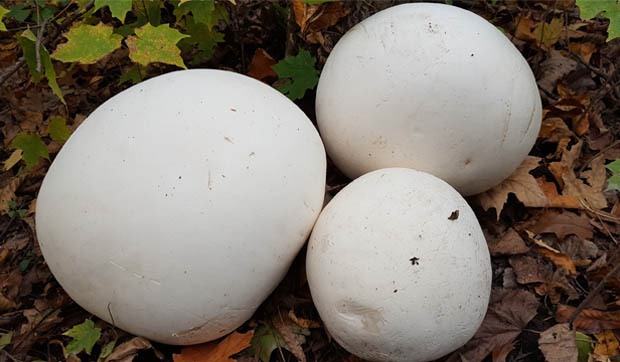 At first glance, this word seems like it is describing pompons, or at least something fluffy. For instance, I once knew a cat named Puffball. I also knew one named Meatloaf. But that’s another story for another time.

Actually, puffballs are the name of one of our area’s most common groups of mushrooms. They are distinguished from other groups by their lack of a stem, as well as a cap and gills-features many other fungi possess.

Puffballs are generally round in shape, and come in many sizes. But the one I’d like to focus on today is the King of All Puffballs, also known as the Giant Puffball, Calvatia gigantea.

In a happy twist that is more than coincidence, Calvatia is derived from two Latin words: Calvus, which means bald, and calvaria, which means dome of the skull. Gigantea means just what you’d think-gigantic.

I have to admit, the first time I saw a giant puffball, I thought it might be a skull. Or maybe a large softball or small volleyball. It was lying in all its ivory-colored glory, in a clearing in the woods near Red Oak Nature Center in North Aurora. Amid the fallen leaves and assorted plant matter, it looked decidedly out of place.

Interestingly, as I was researching the species, rich woodland was not listed as a preferred habitat. Meadows are where giant puffballs like to grow, according to the fungi field guides. But around here, I’ve only found these massive mushrooms in woods-not just Red Oak’s, but also Delnor Woods and Norris Woods in St. Charles, as well as assorted forest preserves, state parks and other natural areas.

Giant puffballs typically appear in our area in September and early October. But at that time this year we were in the throes of a drought. And if there’s one thing most fungi can’t stand, it’s a lack of water.

I believe it was the deluge we received on October 14 that spurred the giant puffball spores into action. Deposited last year by the 2016 puffballs, these tiny bits of fungal material manage to produce mushrooms that, in some cases, are the size of basketballs.

I have to admit, I’m a bit of a mushroom freak. I may not be able to identify very many, but when I get to know one-the giant puffball being one of our region’s more unmistakable species-I literally can’t get enough. I even had one for dinner the other night.

I always hesitate to venture into the world of foraging-that is, finding food in the wild-for humans. Between food allergies and the threat of toxins, it’s usually just not worth it. But a true giant puffball is one of the mushroom world’s most identifiable species.

The thing is, though, you need to know when to pick them. Edible giant puffballs are an even ivory in color, with no spots or streaks of yellow or brown or any other color, for that matter. The puffball itself is the fruiting body of the fungus. Dining upon aside, this large entity’s main purpose is to produce spores and continue the species. Spore production triggers the discoloration and, hence, the time to not pick or consume these amazing organisms.

I’m not really a connoisseur (read: I’ll eat just about anything) but in my experience, puffballs have such a delicate flavor that they can go with just about anything. After peeling, I’ve fried slices in butter and eaten them with syrup, like a fluffy piece of French toast. I’ve sauteed them in olive oil and garlic, and basted them in oil and grilled them.

The texture is similar to a soft tofu and, as you can tell from the variety of preparation methods, equally as adaptable. Unlike tofu though, giant puffballs are loaded with moisture and shrink considerably during the cooking process. The other night, I sliced off a quarter of a soccer ball-sized puffball and had a perfectly sized individual portion after it was sauteed.

Giant puffballs have what I tend to think of as limited appeal. They don’t have the rich flavor characteristic of hen of the woods (Grifola frondosa), chicken of the woods (Laetiporus sulphureus) or the gold standard among mushroom fanciers, the morel, Morchella esculenta. (The species name, esculenta, actually means edible.)

But for someone with adventurous taste buds, not to mention a taste for adventurous mushroom hunting, the giant puffball merits a meal or two. Just be sure to honor public land collecting laws (most forest preserve districts and park districts, for example, do not allow collecting) and check with private land owners before helping yourself.