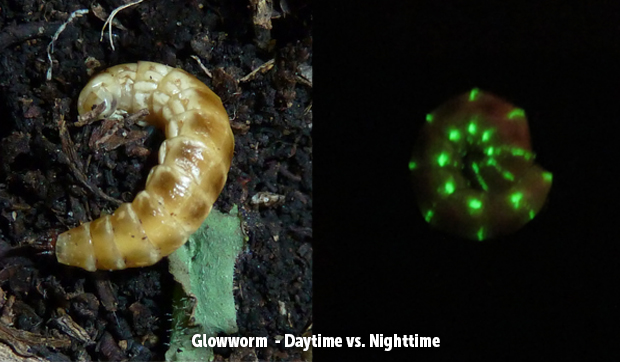 Photo Caption: Glowworm beetles are members of the family Phengodidae, a name that comes from the Greek phengodes, or ‘shining.’ Female Phengodes retain their worm-like look throughout their lives, while mature males look more like traditional beetles-albeit with large eyes and feathery antennae.

A picture of a male Phengodes beetle on the Facebook page What’s Happening in St. Charles showed that this species is still alive and well in our area. It also put me in a nostalgic mood. Please enjoy this Good Natured column from Summer 2013:

Life at Hickory Knolls is filled with many bright spots, small discoveries and tiny triumphs that make our outlook just a little bit sunnier. Like the day last week when no one on staff –not a single person– found any ticks crawling on them. Or like Tuesday of this past week, when we got through an entire day of nature camp, lightning and thunder and all, without anybody-kids or staff– crying.

Two weeks ago actually was our brightest spot to date. That was when Greg Pipis, a member of our ecological restoration team, found an insect that got us positively glowing.

In fact, the insect itself was glowing. For it was, we soon discovered, a glowworm.

But this wasn’t any ordinary glowworm, no sirree. The “usual” glowworms we run into are juveniles of the family Lampyridae, the lightning bugs or fireflies. These little larvae look a lot like streamlined pillbugs (a.k.a. roly-polies) and sowbugs, but have only six legs. Oh, and they glow, faintly, all the time.

Greg’s glowworm was another creature entirely. At 1 1/2 in. in length, it was bigger. And with bioluminescent spots along its sides, coupled with glimmering bands along its back, it was a whole lot brighter.

It was-actually, still is, as it’s living on my desk, for now-a member of the Phengodidae, or glowworm beetle family.

From the Greek phengodes, or “shining,” the Phengodidae consist of about 35 genera worldwide, with a large number found in Central and South America. According to BugGuide.net, my favorite on-line field guide, the family has six genera with ranges north of Mexico; these genera encompass 23 species across the United States and southern Canada.

Twenty-three may sound like a pretty large number, especially if insect species aren’t in your Nature Top 10. But when you consider that the U.S. is home to about 25,000 different species of beetles (28,000 if you throw in an estimate of those not yet described), you start to realize just how unusual these little guys are.

After poring over what little material is available in our reference books and online, we’re maybe 90% sure that Greg’s glowworm is an adult female in the genus Phengodes; were also about 50% certain that the species is plumosa-a name that refers to the male beetle’s plume-like antennae.

Among glowworm beetles, only the males achieve a form we would consider to be a true adult-two eyes, three identifiable body parts and, in this case, those incredible antennae. Females, by contrast, are referred to as larviform; that is, they look like juveniles their entire lives.

This look apparently is what male Phengodidae find eye catching; it’s also what caused Greg to take a second look. When he first saw the insect lying in the dirt, he thought it might be a larva of the dreaded emerald ash borer. But closer inspection revealed that brilliant bioluminescence.

Animals that glow typically don’t do so without a purpose. Light can be used to lure in prey, ward off predators and to attract a mate. But among the Phengodidae, no one’s really sure what the actual function is. Some literature states that the glow plays no role in courtship, and is strictly there to warn potential predators of the beetles’ icky taste. Other references say that males are programmed to look for the glow, then use pheromones to track down individual females.

Something else the research hasn’t helped us with is diet. Everything we’ve been able to find so far states that glowworm larvae and mature females are predatory, feeding on millipedes. We even found a detailed account of how glowworm larvae use their mandibles to pierce millipedes in just the right spot; the bite evidently paralyzes the millipede and renders it unable to discharge the benzoquinones that are its only means of defense. A-mazing!

Yet when Greg first found this glowworm, he put some leaves in with her…and she ate them! Even now, two weeks later, she appears to be thriving on a diet of leaves from several common lawn plants-violets, plantain, clover and dandelions, to name a few.

The millipedes, which we added to her micro-ecosystem after “educating” ourselves, have gone untouched, as have the sowbugs, nematodes and myriad other creatures living in the soil into which she burrows each day.

Did Greg find a new species? Are we harming the habitat from which she came by keeping her in a cup?

We figure the answer to the first question probably is no (even though P. pipii does have a certain ring to it). And we’re hoping the same is true of the second question as well. Besides, any day now, Greg will be taking his glowworm back to where he found her, so she can go back to doing the things she does best: eating whatever she prefers in her natural environment and attracting male Phengodidae with her radiant glow.

We’ll keep beaming too, knowing that these magnificent, and unusual, creatures are living nearby, making our days, and nights, brighter with their presence.