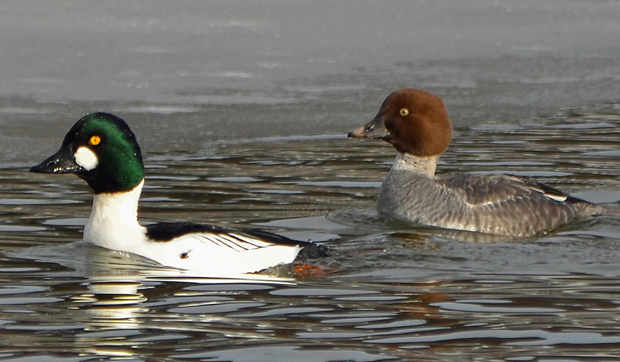 The bright yellow eyes of the male goldeneye aren’t the only things to look for in this distinctive species. Watch for animated courtship displays as winter progresses, and be sure to listen for their whistling wings.

I know we’re way past Christmas, but what if I were to tell you that the movie A Christmas Story could make you a better birder?

Well, maybe that’s a bit of a stretch. The story of Ralphie Parker’s quest for an official Red Ryder carbine action, 200-shot, range model air rifle with a compass in the stock and this thing that tells time won’t inherently help you notice eye rings, wing bars or other field marks. It can’t improve your luck, or your patience. But it will, I guarantee, help you remember how to identify one of our most widespread winter visitors, Bucephala clangula, the common goldeneye.

Every year, starting in fall and early winter, northern Illinois sees an influx of waterfowl from the north. Here to escape frozen conditions that make feeding difficult, these birds find the living relatively easy on our Fox River, thanks to our dams and water-treatment plants. (Sounds weird, doesn’t it? But these most unnatural of water features keep water churning and unfrozen and, in the case of treatment plants, also add nutrients to the riverine food chain.)

Our somewhat predictable cast of river characters gets a lot more dynamic with the arrival of these species, which include diving species like common and hooded mergansers and, yes, goldeneyes.

Medium sized, with a short bill and tail, goldeneyes enliven the waters with their now-you-see-’em, now-you-don’t approach to feeding. On the search for bottom-dwelling invertebrates, the birds disappear in one spot, swim and forage underwater, then pop up again like feathery corks several yards away from where they started.

It’s usually the males that catch your eye first. Their glossy black heads, which reflect a greenish sheen in the right light, feature a oval-ish white spot on either side near the dark bill and offer sharp contrast to the mostly white breast, belly and sides. The back and tail are black, and-to me anyway-give the impression of a tuxedo-clad duck on his way to a very important date. (Those white facial spots though? I always want to offer these sharp-dressed men a napkin, to wipe away what looks like whipped cream stuck on their cheeks.)

Female goldeneyes are less flashy and thus a little trickier to identify. Look for birds with a chocolate-brown head atop a mottled gray body. The tip of the bill is a yellowish orange. And then there are those lovely eyes…and the reason A Christmas Story is relevant.

The movie features a scene-a showdown, really-between young Ralphie and Scut Farkus, the town bully. Ralphie’s description of Scut includes the key words that will help you identify goldeneyes both female and male: “He had yellow eyes! SO HELP ME GOD, YELLOW EYES!!”

I think of that line every time I’m along the river, peering through binoculars at the small flocks of winter guests. From time to time we see the goldeneye’s smaller but similar cousin, the bufflehead, B. albeola. Males of this species are similar in color to goldeneyes, save for two major distinctions: The white on the head is at the back, as though they’ve been hit by a whipped cream pie (flung by a goldeneye?) and the eyes are DARK. Not golden, or yellow, at all.

Granted “yelloweye” doesn’t have quite the ring to it that “goldeneye” does. And we do have a few other winter visitors with light-colored eyes, including ring-necked ducks (which supposedly have a chestnut-colored ring around their neck, but are easily identified by the white band and black tip on their gray bill); male redheads (head is, you got it, red); and scaups that show up during migration.

But if your mind works like mine, A Christmas Story and Scut Farkus will help you nail the ID every time.

Now, getting close enough to make that identification can be tricky. As visitors to our area, goldeneyes-and buffleheads, and mergansers et al-are much warier than our than our resident mallards and assorted hybrids. Whereas those ducks look at humans as food dispensers that should be approached, not avoided, goldeneyes typically spook at the first fast movement they see or sudden noise they hear.

Ah, but that’s when you can take advantage of the goldeneye’s other most helpful identifying characteristic: the whistling sound the wings make in flight. In fact, it’s this trait that is responsible for the bird’s species name, clangula, which is Latin for small noise.

Common goldeneyes will be with us for another month or two before heading north to their boreal forest breeding grounds. Now’s the time to head out and look for this diving duck with the whistling wings and-I swear-yellow eyes. Sure, it might be a little chilly out but, hey, I triple dog dare ya!

Pam Otto has green eyes and is the outreach ambassador for the St. Charles Park District. She can be reached at 630-513-4346 or potto@stcparks.org.