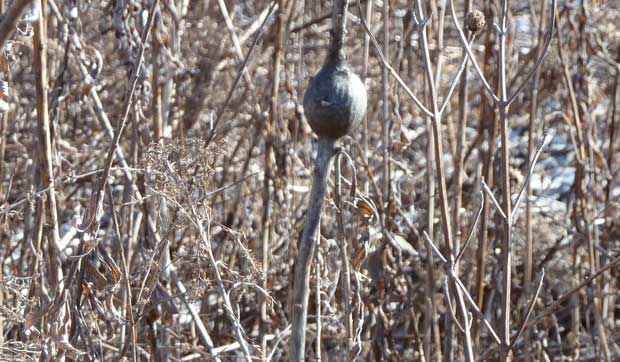 Goldenrod galls are particularly noticeable this time of year. Each gumball-sized growth initially houses a young goldenrod gall fly, but later can be used by a variety of other small creatures, including spiders, beetles, bees and wasps.

A few weeks ago I received an email from a nice woman named Wendy. A member of the Carver County Horticultural Society in Minnesota, she’d come across a Good Natured column on goldenrod galls and wanted to know if she could share the information with her club. I said sure, then went out for a walk. And guess what I found? Goldenrod galls. Everywhere! It made me realize that the topic is just as timely now as when it first ran. Even better, goldenrod gall technology is virtually unchanged since the piece first ran. So, without further ado, please enjoy this column from March 2013:

Let’s face it, fruit flies have an image problem.

Some are serious agricultural pests–remember California’s infamous medfly infestation? Others, namely the Drosophilidae, are known primarily for the way they hover around overripe fruit. (Who hasn’t swatted away these tiny creatures as they’ve swarmed over a bowl of browning bananas? People raising tiny toads, that’s who. Or people who arrived at work and found baby praying mantids all over their desk. More on this surprise in a future column.)

There is, however, another type of fruit fly living in our midst, one that goes about its business quietly, aiding several other beneficial species along the way: the goldenrod gall fly.

If you’ve ever walked past a field of goldenrod, you’re probably familiar with this industrious creature. Or at least the products of its industry.

In late spring and early summer, females of the species Eurosta solidaginis lay individual eggs in the terminal buds of goldenrod, or Solidago spp., plants. The eggs hatch in a week or so, and the wee larvae burrow their way down into the pith, or spongy middle part of the stem. Once ensconced, they go about their business of feeding on plant juices and growing. As they expand, so too does the plant tissue around them, probably in response to chemicals emitted by the baby bug.

This time of year the immature flies for the most part are safely insulated within the plant’s stem, nestled in their homes that by this point have swollen to roughly the size and shape of a gumball.

I say “for the most part” because not every goldenrod gall fly lives this life of luxury. Some are parasitized by beetles and wasps, while others are consumed by chickadees and downy woodpeckers.

Those that do survive will go on to wake from diapause in spring, then pupate and emerge as adults that will begin the cycle all over again. (Here’s a fun fact: Adult gall flies do not have the proper appendages to engineer an escape and hence would be helplessly trapped inside their former safehouses, were it not for one amazing feat. Driven by instinct, and a pair of mouth hooks, the gall fly larva excavates an exit tunnel in fall, stopping just short of the thin epidermal layer of the plant. Post pupation, all the adult fly needs to do is ram through the fragile skin. Like a football player breaking through a banner on game day, it’s free to take wing. Go team Gall Fly!)

At this point, you may be thinking we’ve come to the end of the Tale of the Gall. Successful emergence means the gall’s usefulness is over and done with, right?

Like so many other fascinating facets of nature, the end of this story actually is the beginning of several others.

Provided they weren’t excavated by bird beaks, or chewed upon by rodents, those galls have plenty of utility left. The tough, corky interior can still protect inhabitants from intruders, and the chambers that once housed gall fly larvae can provide sufficient, even spacious, accommodations for a new round of occupants.

Scientists investigating secondary uses of goldenrod galls have discovered all sorts of creatures holed up inside these sturdy, ready-made structures. Small species of wasps, bees, spiders and beetles—many that are important parasites or predators of pest species—take advantage of the space inside the galls’ nearly impenetrable walls.

Wasps will cover the chamber’s exit hole with a tiny bit of mud; bees will fill it with a parchment-like plug; and spiders may add a dollop of silken web as a door.

The next time you’re tempted to dismiss a growth on a plant stem as “just another goldenrod gall,” remember that it’s the work of E. solidaginis—a fruitful fly indeed.