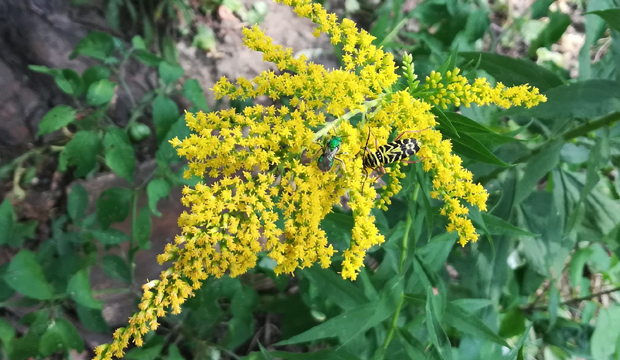 Photo Caption: A small green sweat bee and a boldly striped locust borer beetle are but a few of the many insects drawn to goldenrod’s showy blooms.

Next to my fireplace hangs a slab of cedar, a fine piece of functional artwork that features a bottle opener alongside the words, “Beauty is in the eye of the beer holder.”

That catchy phrase comes to mind pretty much every time I’m out having a barley pop with friends-occasions which, thanks to covid, have become few and far between. But just the other day the saying popped into my brain in, of all places, my backyard. Missing just one letter, it became, “Beauty is in the eye of the bee holder,” and arrived courtesy of an oft-maligned plant: goldenrod.

I was poking around the shrubbery, looking for the white snakeroot that had surprised me around this time last year, and was feeling a bit chagrined as it was nowhere to be found. But as I moved around amid the tangle of ninebark, highbush cranberry and grapevine, I became aware of a buzzing sound.

It didn’t take long to pinpoint its source: the Canada (or, some say, tall) goldenrod that showed up, just as accidental as the white snakeroot, and made itself at home at the base of a too-big-for-its-own-good silver maple.

Eastern bumblebees (Bombus impatiens), carpenter bees (Xylocopa virginica) and bright green Halictid, or sweat, bees were loading up on pollen and nectar, as were some tiny dark bees, too small for me to ID. They were accompanied by a few goldenrod soldier beetles–butterscotch-yellow beasties that also feed on pollen and nectar and the occasional aphid or two-and a beautiful locust borer (Megacyllene robiniae, named for the way its larvae feast on invasive black locust, Robinia pseudoacacia).

Then along came a honey bee (Apis mellifer), and I had to laugh. Longtime Good Natured readers might remember an encounter we had at Hickory Knolls several years ago that involved both goldenrod and honey bees, though not in the way you might think.

I was in the nature center’s exhibit room when I noticed an odor that was undeniably unpleasant. Sweaty socks, maybe? Or rotten cheese? An expired mouse? Thinking one of our snake enclosures needed attention, or that a youngster had left something perishable in a seat cushion, I started sniffing around the space. It wasn’t long before I found the source of the penetrating stink: the observation bee hive.

Worried that we’d done something wrong and the bees were in peril, I got in touch with our beekeeper. His response? Hearty laughter, followed by a fascinating explanation.

The smell, he said, was the stench of goldenrod nectar. Organic compounds in asters and goldenrods-both members of the very large family Asteraceae-are what created the strong smells. And while the scent is very prevalent while the nectar is curing, the finished honey tastes nothing like moldy cheese, or stinky socks, or dead stuff.

Thinking back to that day, I shoved my nose deep into a bee-free flowerhead and inhaled deeply. I detected a very light fragrance that was, dare I say, pleasant? Sweet for sure, and not icky in the least. In fact, it made me smile.

But you know what it didn’t do? Make me sneeze.

For as far back as I can remember, goldenrod has suffered under the misconception that it causes hay fever. Itchy, watery eyes; persistent nasal drip; and yes those sneezes often are attributed to goldenrod and its showy blooms.

But the real culprit, at least for August-onset cases, is ragweed. Its flowers are greenish and nondescript, so its presence often goes unnoticed until its minuscule pollen grains take to the air. Unlike goldenrod, which needs insects to move its pollen around, ragweed is wind pollinated. The grains measure 1/25,000th of an inch and are covered with spines, and can travel hundreds of miles from the mother plant, to the noses of allergy sufferers everywhere.

While goldenrod’s pollen needs to hitch a ride on a bee or beetle, its seeds do not. As we move into fall, the plants’ brilliant yellow blossoms mature and morph into fluffy white seeds, which then disperse on gusty days. They fly hither and yon, landing in natural areas, parks…and yards.

Some goldenrods are more prolific than others. The seeds that landed in my yard are what I call Canada goldenrod, Solidago canadensis, an Illinois native that is very prolific. Some experts differentiate between this species and S. altissima, tall goldenrod, while others say the latter is a variety of the former.

Either way, we have plenty of goldenrod to go around. The Field Museum’s publication, Goldenrods of the Chicago Region is available online (https://fieldguides.fieldmuseum.org/sites/default/files/rapid-color-guides-pdfs/389_1.pdf) and lists 18 different species that can be found in our area.