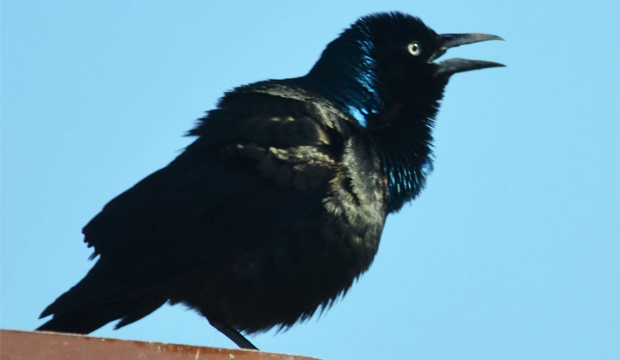 Common grackles belong to the family Icteridae, or New World Blackbirds, making them cousins to a number of other familiar birds including bobolinks, meadowlarks and orioles.

They’re a bird you know, even if you don’t know birds. Remember back when you learned about robins and cardinals and blue jays? Grackles were the birds that we all called blackbirds.

But when you take the time to look more closely, you realize that black doesn’t begin to describe these fascinating creatures. Heads of mature male common grackles are a lovely iridescent blue, and in the right light their dark bodies shimmer with an opalescent rainbow purples, greens and yellows-kinda like an oil slick, with wings. Female plumage generally is duller but will still flash a pearly sheen when the sun bounces off the wings. Both sexes develop light yellow eyes as they mature, a feature that adds intensity to their piercing gaze-and makes it somewhat easier to distinguish female birds from youngsters.

If you’ve had experience with grackles at your birdfeeder, your choice of adjectives might’ve skipped past “lovely” and “opalescent” and headed straight for “obnoxious” and “messy.” If you’ve heard about their reputation for raiding nests and stealing other birds’ young, you might resort to words that start with d, like “dastardly” or “darn”…or worse…

But many of our most-loved backyard birds share in those habits. If you have a platform or hopper-style feeder, it just avian nature for your visitors to poke around looking for their favorite seeds while casting others aside. Grackles just do it more, ah, vigorously.

As for nest raiding, that’s also a behavior displayed by many species. In fact, you know who leads the flock? House wrens. Their motivation is different, as they’re mainly looking to eliminate competition as opposed to actually feeding on the eggs and young, but their actions still affect the reproductive success of their nearby nesters.

Feeding on your neighbors? Evicting their babies?? As humans we consider either behavior atrocious, but it’s just the way of nature. It’s neither good nor bad, it just, well, is.

While we’re considering common grackles’ impacts, we should probably also take into account what happens when flocks of their gregarious birds descend on farm fields they can take out rows of seedlings and leave significant financial loss in their wake.

It’s probably this habit among all others that has earned the grackle the title of pest, and may be responsible for the common grackle’s current state of affairs. Although their continental population is estimated at 69,000,000 (according to the 2016 Partners in Flight Landbird Conservation Plan) and they are considered a species of least conservation concern, their numbers have dropped dramatically over the last 50 or so years. The North American Breeding Bird Survey shows the population declining at a rate of 2% each year, for a cumulative drop of 58% since 1966. The 2014 North American Bird Conservation Initiative’s State of the Birds Report rated common grackles a species in steep decline.

(As a means of comparison, red-winged blackbird nationwide numbers are estimated at 150,000,000, a little more than double that of common grackles. Yet their range is twice as large, so the birds are spread out over a much larger area. And they, too, are experiencing declines, though not as steeply as grackles.)

The threats are real, even though it’s hard to believe when a flock of several hundred lands in your yard and starts, um, grackling. Their songs are described as hoarse and squeaky; their calls are harsh chucks and clucks. And if it’s fall, and they land in an oak tree loaded with acorns, their energetic approach to feeding causes the nuts to rain down, sounding just like a hail storm. (I know this because I’ve heard it, on more than one occasion. Each time it was cloudy out, and each time I was fooled into thinking we were getting a surprise squall. Each time too I had fun scanning the flock, looking for other species like redwings, cowbirds and the elusive rusty blackbird among the throng. Try it sometime! You’ll be surprised at the diversity in a seemingly homogenous flock.)

If you fancy grackles or even if, like me, you have a thing for animals with unusual behaviors, keep your eyes open for a behavior known as anting. Grackles are one of several bird species that themselves with the formic acid in ant venom, a practice that is thought to help dispel parasites.

One summer several years ago my friend Mike Horton was lucky enough to witness grackles anting-only instead of ants they were making use of black walnut husks, working the potent chemicals through their feathers. The birds will use marigold blossoms, chokecherries and even citrus rinds in their quest to keep bugs at bay.

Grackles are short-distance migrants, so these days they are back in full force, hitting up birdfeeders, setting up breeding territories and in general making their presence known. If you get a chance, check them out and appreciate them for what they are-a blackbird, and so much more.