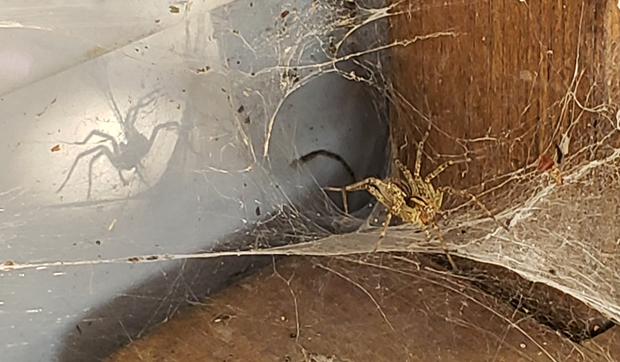 Photo Caption: Grrrowwrrr! A grass spider, medium-sized at best, casts a long shadow from its tangled web at the base of a deck. (Photo courtesy of Marita Katzbeck)

Aah, the joys of summer. Here in the midst of another hot spell, the signs of the season are undeniable. Cicadas are buzzing, prairies are blooming and spiders, bless their little cardiac marks, are everywhere.

(Fun fact: A cardiac mark is a line near the base of a spider’s abdomen that lies right above its heart. Pretty neat, huh?  But it gets even cooler. In some species, if you get close enough and look hard enough, you can actually see the spider’s heart beating beneath that mark. Amazing!)

With so many webs covering so much of our local landscape, I thought it might be helpful to take a look at some of the spider groups you’re more likely to encounter. In an occasional series running into fall, we’ll spotlight various families, genera and even a species or two that just might weave their way into your own cardiac marks. Er, hearts.

We’re going to start off with a genus I’m sure you’ll recognize, if not by the spider then for sure by their webs. Agelenopsis, also known as the grass spiders, have been super busy this summer, slinging their thick mats of white silk across wide expanses of shrubbery, grass and groundcovers, extending onto porch steps and deck supports and even the dark recesses of garages and sheds.

The size and strength of these flat, expansive webs are impressive, for sure, but what’s really nifty is the little tunnel at one end. That’s the spot the web’s creator weaves just for herself. (That’s right, the architects of these remarkable residences are females; male grass spiders are more nomadic, spending their summer nights on the move in search of a mate-cruising for chicks, if you will.)

Bedecked with a longitudinal stripe down their back, grass spiders often are mistaken for wolf spiders, since certain types of wolfies have this same marking. But there’s a big difference between the two. Grass spiders are web-based critters while wolf spiders are ambush predators that eschew webs in favor of pouncing on prey.

If you compare abdomens (and I realize, for some folks, that’s a really big IF), you’ll notice that grass spiders have two projections at the rear. These structures are called spinnerets and are the grass spider’s web-spinning organs. Wolf spiders lack these structures.

I tell you, if I were a spider, Agelenopsis is what I’d want to be.

That sheet web with the funnel at one end is a great place to hang out. It provides privacy as well as protection from the elements. Even better, when it’s time to eat, meals are easy as pie.

A silken barrier just above the funnel functions as a nearly invisible food-snaring net. Unsuspecting insects tumble into the net, then fall smack down in front of the waiting spider-kinda like having a pizza fall down from your living room ceiling.

Well, with one major exception. While pizzas need little subduing, insect meals require a little more work. When a bug drops in, the grass spider rushes out of her funnel and delivers a swift bite, injecting venom into the six-legged “pie.” She then drags her “pizza” prey back into the funnel for a quiet dinner at home.

Dining indoors instead of al fresco gives the spider a couple of advantages. One, she is not exposed to other creatures who might consider her prey of their own. And two, other insects can’t see what happened to their comrade, thus increasing the chances, for the spider, of more food falling from the sky.

While female grass spiders are pretty well provisioned, males have it a little tougher. Web-spinning is not their forte. Dancing, though, is.

Female spiders of many species have well-deserved reputations for being cannibalistic. Larger than males, more than a few have been known to snack on their mates after courtship wraps up. Saddled with this threat, male spiders have come up with a fantastic repertoire of activities all designed with the singular purpose of self preservation.

Some species physically restrain the female’s fangs, so they remain safely out of the way; certain others present the females with a nuptial gift-a wad of silk that may or may not contain a succulent prey item inside. Either way, the female remains occupied unwrapping her “present” and thus unlikely to sink her fangs into her suitor.

Male grass spiders, however, don’t have modified structures for defeating fangs, nor are they much good at wrapping presents. But boy, can they dance.

When a male Agelenopsis encounters a female’s funnel web, he begins a series of movements intended to not only announce his presence, but also lull the female from a state of high alert to eventual quiescence. He quivers his legs, which causes the web to vibrate, and sways his abdomen in a sort of belly dance. These movements result in a release of chemicals called pheromones that cause the female to become passive and lets him get down to business. (For interpretive purposes, you can think of this ritual as a spidey version of the phrase, “Candy is dandy but liquor is quicker.”)

Although grass spider activity is nearing its peak, it’s a pinnacle that’s short lived. These entertaining spiders have a one-year life cycle that culminates with the production of egg sacs. Mom and pop fade away, their dancing days over, and the wee ones bide their time.

With the return of warm weather, little grass spiders will burst forth and the whole cycle, bug pizzas and pheromones and all, will begin once again, in a shrub or lawn or deck support near you.