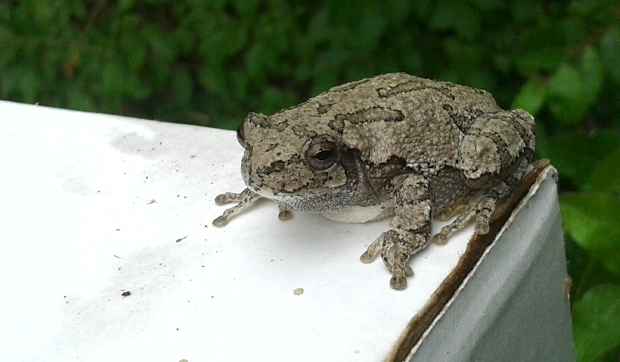 The things you learn when you write a nature column.

Years ago I didn’t know, for instance, that the word fungus made some folks uncomfortable. Little did I realize that the word maggot could actually make people’s stomachs turn, or that certain individuals would find the word larva (which is really just another, less specific term for maggot) equally appalling. And I really had no idea that anyone would write to tell me of these feelings.

But emails don’t lie-well, at least these kinds don’t. The message is loud and clear: Write about something cute and adorable, or else…

So today, dear readers, in the spirit of trying to not offend, disgust or otherwise repulse anyone, anywhere, I’d like to introduce you to one of the cutest, most adorable, yet also easily overlooked, member of our local fauna. Meet Hyla chrysoscelis, the Cope’s gray treefrog.

As the Kane County coordinator for the regional Calling Frog Survey, I get to see, and hear, a lot of frogs. Now, don’t get me wrong, I love them all. But this little Hyla is one of a select few that are most nearest and dearest to my heart.

Somehow though, despite some fairly remarkable qualities, this delightfully pudgy froggy is not very well known. A member of an order that includes some very large (as in bullfrogs) and very small (as in spring peepers) specimens, the Cope’s is neither. Its skin is bumpy and vaguely reminiscent of “warts,” causing some folks to call this frog a tree “toad”-which it is not. And its call, produced by males in spring, is described as a “harsh trill”-not exactly the sort of quality that fosters close bonds, at least among humans. (Female Cope’s, at which the call is directed, are another matter entirely.)

Maybe it’s the “gray” part of the name that puts people off. But you know what? This little guy frequently is not.

Thanks to an ability to change the shape of the pigment cells in its skin, the Cope’s can transform from gray to green and back again. When temperatures are cooler or light is subdued, the cells expand and the frog adopts a darker coloration. When it’s warm or light is bright, the skin appears green. This special talent allows the frog to blend in among the gray lichens on tree bark, as well as amid the greenery of our woodland understory plants. Pretty awesome, huh?

These color changes occur on the dorsal surface-the part we would consider the top, or back, of the frog. The undercarriage, by contrast, stays relatively constant in color. But oh, what a color it is! On the inside of its hind legs, the Cope’s sports a showy splash of yellow or orange. This pigment, known as flash coloration, is thought to startle and confuse predators, and/or perhaps warn them of the frog’s secret weapon.

You read that right…this little snookums has a pretty powerful means of defending itself, in the form of toxic skin secretions that irritate the eyes, nose and lips, as well as open cuts of anyone that dares handle it. Friends who’ve studied the species recall sneezing, as if having snorted pepper, when sorting collected individuals.

Predators, however, seem to have found a way of overcoming this defense, as gray tree frogs are on the menu of a great many animals, including several species of mammals, birds, reptiles and even other frogs. (Either that, or they’ve come to expect their tree frogs served with a dash of hot sauce.)

As we run down the list of the gray tree frog’s notable qualities, we’d be remiss if we didn’t mention its enlarged toe pads. Soft and sticky, they facilitate the frog’s arboreal existence and allow it to adhere not only to leaves, but also window panes, downspouts, porch columns and all manner of surfaces-including, as you can see by this week’s photo, a cardboard box that was sticking out of a dumpster.

Granted, garbage cans aren’t usually listed as part of the Cope’s gray tree frog’s natural habitat. But when you consider what else hangs out near trash receptacles-insects and, more specifically, flies–the dumpster locale starts to make sense. Gray tree frogs are primarily insectivores and go where their food can be found.

Another non-natural site for this species? Windows, siding and other parts of manmade structures. Often brightly lit, they attract a bounty of night-time beetles, moths and other bugs. These surfaces, even though they offer little in the way of camouflage, make total sense from the frog’s point of view.

So far in this review of endearing charms I’ve referred exclusively to the Cope’s gray tree frog, because that’s the species we have here in Kane County. But you know what? H. chrysoscelis has a doppelganger-another species that’s absolutely identical, at least on the outside. The eastern gray tree frog, H. versicolor (see what they did there, referencing the changing color in the species name?) looks just like the Cope’s, but has twice as many chromosomes.

It also has a distinctly different call. As we mentioned earlier, Cope’s has a harsh trill; it reminds me of a grating alarm, or a game show buzzer. The eastern gray’s call, by contrast, is more mellow, almost birdlike. (In fact, some literature likens it to the call of the red-bellied woodpecker.)

Given that our dumpster frog never uttered a peep, or trill, for that matter, we’ll just have to go with what data we have for the county and assume s/he is a Cope’s. Make that a cute, adorable Cope’s.

That probably, over its lifetime, has eaten its share of larvae.