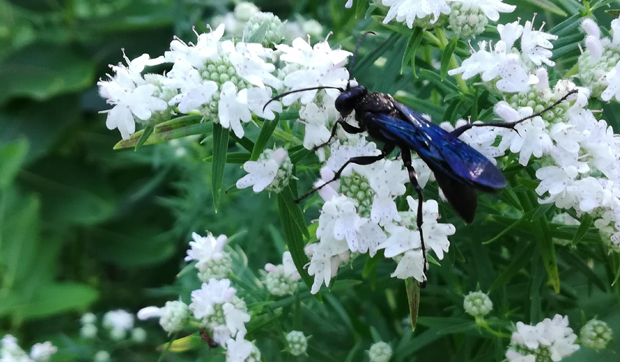 A great black wasp takes a nectar break amid the plentiful blooms of common mountain mint.

Back in the day of Saturday morning cartoons, one of the more memorable commercials (and one of the more annoying, if you ask my mom) hyped the virtues of a certain chocolatey cereal. Sonny the cuckoo bird (who actually looked more like a roadrunner in a striped sweater, but hey, whatever sells, right?) would try to find various means to keep himself away from the cereal. Inevitably though, before the 30-second ad was over, Sonny would yield to temptation, shouting “I’m Cuckoo for Coco Puffs! Cuckoo for Coco Puffs! Cuckoo for Coco Puffs!” as he bounced around and waved his wings in anticipation of the munchy, crunchy, chocolatey goodness.

This summer I haven’t been lucky enough to have Sonny or any other cuckoo in my yard, but I do have something that’s making lots of insects go cuckoo, as in crazy with cravings: Pycnanthemum virginianum, or common mountain mint.

I know what you’re thinking…MOUNTAIN mint? In Illinois?? As it turns out, the name dates to 1790 or so, a time when many plants were being cataloged for the first time, and can be traced to Pennsylvania, which does indeed have mountains. But probably the more important part of the name is its genus, Pycnanthemum, which comes from the Greek pychnos, or dense, and anthemon, or flower. This densely flowered plant offers something for everyone, especially pollinators.

I tell you, I’ve had the best time this summer watching all sorts of insects go positively wild over this plant and its seemingly endless supply of nectar. Each flowerhead consists of many-like, 50-individual flowers that bloom at different times, which means the plant is a nonstop source of food from June to September.

I’ve got common mountain mint planted in my front yard, and have lost track of the types and numbers of native bees, beetles, flies and butterflies that visit the small whitish blooms throughout the day. But the visitor that trumps them all-the one that turns my head every time-is the great black wasp, Sphex pensylvanicus.

Wasps have a mostly undeserved reputation as being aggressive and apt to sting first and ask questions later. Sure, some of them-namely the eusocial yellowjackets, paper wasps and bald-faced hornets-do defend their nests pretty fiercely. But many other species are solitary; without the drive to defend a nest and dozens or hundreds of cohorts, they go about their days in a peaceable manner, only stinging when truly threatened. (Remember the song Baby Bumblebee, wherein some young scamp brings home a young Bombus, then proceeds to squish it and get stung? That’s the level of threat needed to get a solitary wasp to sting.)

At any rate, their role in our local ecology dictates that some solitary wasps grow to a pretty large size. Maybe you’ve heard of the cicada killer wasp, Sphecius speciosus? It stings and paralyzes cicadas, which it then uses to feed its offspring.

The great black wasp does something similar, only instead of cicadas its baby foods of choice are grasshoppers and katydids. These insects are large and meaty and, evidently, exactly what developing great black wasp larvae need. Injecting the hapless creatures with a venom that immobilizes but isn’t lethal, the female wasp then grasps her prey and totes it off to the natal burrow she’s dug in soft soil.

Ah, but here’s where things can get a bit tricky for this spunky Sphex. Lugging home her trophy, which in some cases can be a feat equivalent to a human lugging home a piano, she becomes vulnerable to an interesting bit of behavior that scientists call kleptoparasitism-that is, other critters try to steal what she’s caught.

Catbirds have been implicated in this behavior, as have house sparrows; other species probably do too but have yet to be caught in the act. A hearty and nutritious grasshopper, rendered helpless by the wasp’s venom is, after all, a free meal that would be hard to pass up.

The good news, for the wasp, is that she’s capable of stinging multiple prey insects multiple times, so as long as the klepto-creatures eventually leave her alone, she should be able to complete her duty of provisioning her nest, laying her eggs and perpetuating her species.

And that’s where mountain mint comes in. Its copious amounts of nectar provide the energy female great black wasps need to carry out their tasks. Males too, although their days are quite different from those of their mates. They can’t help with the hunting because they have no stingers, and their smaller size means they wouldn’t be of much helping hauling home the pianos, I mean, prey. They do however do a splendid job of patrolling and protecting choice nesting areas from other male great black wasps-but, as far as I can tell, not catbirds, sparrows nor other marauders.