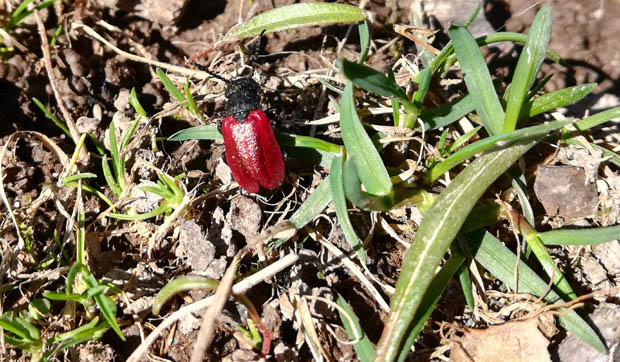 Photo Caption: Just over half an inch in length, this adult Tricrania sanguinipennis beetle will spend its brief time above ground in search of a mate, in close proximity to Colletes bees, which nest below ground and provide the key to the beetles’ survival.

Last week when we related the discovery and subsequent identification of an awesome little beetle, Tricrania sanguinipennis, I promised that this week we’d dig deeper into its biology and ecology. That’s no lie! To learn more about what makes this handsome insect tick, we need to–figuratively–head down, down to the ground, and beneath, where the beetle spends 99% of its year-long life.

But before we embark on this subterranean adventure, I think it prudent to make things easier on us all and assign little Tricrania sanguinipennis a name that’s not such a mouthful. Let’s, for our Good Natured purposes, call these little guys Beautiful Underground Gate-crashers, or BUGs, for short.

The BUGs that were spotted a couple weeks ago at Delnor Woods Park in St. Charles are part of a larger family of beetles called the Meloidae, or blister beetles. Besides producing a fluid that can cause skin irritation, members of this family also are famous for their habit of parasitizing other insects–sometimes grasshoppers but often native bees. The Delnor BUGS specifically target Colletes cellophane bees.

When I learned of this trait my first thought was, “Criminy Pete! As if our pollinators didn’t have enough strife in the form of pesticides and habitat loss, they have to deal with parasites too??” But T. sanguinipennis’s, I mean the BUG’s, life cycle is so fascinating, I knew it had to be told.

At this time of year, our BUGs are engaged solely in reproduction. No feeding, so far as anyone has been able to tell; no flights, of fancy or anything else, as their wings are nonfunctional; no attempts at nestmaking or homebuilding of any sort. What’s the use? Their adult stage is final and fleeting and as for provisioning their offspring…well, that’s what Colletes is for.

Adult BUGs emerge from the ground about the same time Colletes bees do. After mating and laying hundreds of eggs, the adult BUGs fade away and their brood takes the main stage.

At this point the young BUGs are known as triungula. Unlike many beetle larvae that are chubby, grubby and clumsy at best, triungula actually are quite mobile. They have to be. Their mission at this first phase, or instar, is to hitch a ride to a burrow that will become Home Sweet Home for the next 11 1/2 months or so.

Their quarry is male Colletes bees, which are in turn ranging about their own natal area in search of females.

Colletes bees are one of several types of ground-nesting bees that are quite different from their more famous cousins the honeybees and bumblebees. Ground bees, although they look to be living in colonies, actually are solitary in their habits. Each female digs her own burrow and nest chambers, provisions them with eggs and otherwise tries her best to not disturb her Colletes neighbors. Since they have no hive or colony to defend, their nature is gentle; stings are extremely rare. In fact I once sat right in the midst of dozens of Colletes tunnels and you know what I got? A little sunburn on my nose, and a tick. But no stings, or even the threat of one.

Cellophane bees, also known as plasterer bees, are named for the transparent material a female will produce and use to line and stabilize  (“plaster”) the soil that forms the interior of her nest chambers, or brood cells. These excavations, only a few inches below ground, are masterfully dug off to the side of a main tunnel, a feature that helps minimize the risk of the offspring drowning should a heavy rain occur.

The female attaches an egg to the wall of each brood cell, then delivers a nutritious mixture of nectar and pollen upon which the little bee larva will feed.

That is, unless a BUG larva beats the baby bee to it. That’s right, as Mama Colletes is busily preparing for her future family, those BUG triungula (tri = three, ungula = claws) are doing their best to crash the party. Using their tri-clawed little feet, they grab hold of the hairs on Papa Colletes, who is doing little else besides crawling around and looking for a Mama to mate with.

Once he meets with success, the triungula transfer from the hairs on Papa’s underside to other hairs on Mama’s topside, then hitch a ride back to the home tunnel and those delightfully prepared brood chambers. Once there, they first consume the Colletes eggs–to eliminate competition for the finite food source–and spend the next year happy as a pig in shaving cream. They feed, molt and pupate in a water-resistant chamber, amid the pollen-and-nectar “bee bread” feast, before at last emerging as an adult T. sanguinipennis–just in time to start the process all over again.

Blister beetles in general fall under the classification of parasitoid, which is a parasite that kills its host.

I know what you’re thinking–because I at first thought the same thing. The Delnor BUGs and their kind are bad, because they kill helpful little native pollinators. But you know what? In nature, there is no good or bad, there just…is.

The beetles may reduce the number of Colletes bees in a localized area, but it would do the beetles no good at all to eliminate all Colletes, for then they would have no future either. Plus, if Colletes were to multiply unchecked, they could reach a point where they overtax their resources, which is also not good in the greater web of life.

Also remember, Mama BUGs lay hundreds of eggs. They have to. There’s a very good chance that many triungula will perish long before their ride comes along.

Further, there’s also a chance that the Colletes bees that go unparasitized may exhibit a feature that is inhospitable to Tricrania triungula. Maybe their hairs are too slick, or too spiky. Maybe the nest chamber has a different size or shape. Whatever the variation, it could turn into something over time–like thousands of years of time–that could make Colletes resistant to the efforts of Tricrania.

Then there’s the contribution to the food chain that BUGs make. Adults and larvae alike feed plenty of hungry insectivores, especially spiders, that are out and active in early spring.

The Colletes-Tricrania drama is playing out right now at Delnor Woods Park, and at countless other areas where grass and groundcovers are sparse and the bare soil catches plenty of sunshine. Seize the next warm day and head out and observe the spectacle. It’s one bug you’ll be glad you caught.