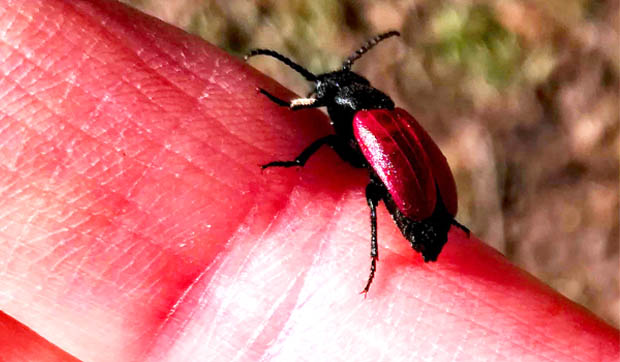 This beetle, Tricrania sanguinipennis, sports blood red wing covers and a black head and thorax. It appears in our area in early spring.

North America is home to around 30,000 beetle species. Thirty. Thousand. Species. It’s no wonder that identifying them can be difficult.

Some beetles, bless their hearts, display obvious features that are nearly unmistakable. Picture the large mandibles of a male stag beetle, a.k.a. pinching bug, for example. Or the emerald green wing covers and six-count ’em, six-spots of the six-spotted tiger beetle. And don’t forget lightning bugs, a.k.a. fireflies, which are neither true bugs nor flies, but rather-you got it–beetles. We’ve got a few different species in our area, but that blinking rear end is pretty hard to miss. (We’ll leave the story of daytime fireflies, which have no light, for another time.)

Sometimes, though, the giveaway trait lies not in how the beetle looks, but how it acts. Such was the case the other day with a handsome specimen-actually, a handful of specimens–we encountered at Delnor Woods Park in St. Charles.

The sun was shining, the birds were singing, and we were exploring some playground nature with some Pottawatomie Preschoolers when one young man shouted, with some consternation, “Bees!”

I looked and, sure enough, buzzing just above some bare soil were a hundred or more ground bees. (Good Natured readers might remember these insects from two columns that ran this same time last year. Like beetles, ground bees also can be difficult to identify. But happily, some of that uncertainty was about to change.)

Our attention quickly shifted from making acorn cap whistles to watching the bees that, due to their solitary nature, presented little threat. This activity then morphed into trying to find “Daddy Bees,” which buzz around and dodge in and out of burrow entrances, as well as “Mommy Bees,” which would disappear down the holes they’d dug to lay eggs and provision the nest chamber for the larvae to come.

The students were in the middle of imagining what life must be like down there underneath the ground when they were alerted by another shout-this time, mine: “Beetles!”

Milling about the soil and sparse grass were not one or two, but a dozen or more beautiful beetles. Adorned with red elytra-the technical name for wing covers-and a black head and thorax, they were unlike any beetle I’d seen before. But identification would have to wait awhile, as there was more preschool nature-in the form of “Ants!” –that needed investigation prior to returning to school.

So it wasn’t until that evening that I was able to sit down and review what had transpired there by the playground at Delnor Woods. My first thought was to research beetles associated with red oaks, as a large one still stands just east of where we found the beetles, and an equally large one fell down there a few years back. Could these insects be associated with the decomposing roots of the downed Quercus rubra?

That clue, doggone it, was a red herring. And so the process of identification continued.

Hmm. What else was prominent during our park expedition? What other associations could be made? What species of beetle could it be?

As it turns out, I should have been asking, “What species of beetle could it bee?”

The insects in question turned out to be Tricrania sanguinipennis, a type of blister beetle that makes its living off of ground-dwelling bees, specifically those of the genus Colletes.

Aha! Two mysteries solved at once! When I’d written about ground bees last year, I wasn’t completely certain whether I was witnessing members of Colletidae, also known as cellophane or plasterer bees due to the way they line their nest chambers, or Andrenidae, which are also called mining bees. But the presence of T. sanguinipennis (and gosh I wish it had a common name) sealed the deal, at least as far as the Delnor bees are concerned.

This association, though, is really just the beginning of the story. What ensues when Tricrania meets Colletes is a saga of deception and death, feasting, survival and hypermetamorphosis. With a dash of nectar, pollen and wax for good measure.

Next week: We dig deeper into the life cycle of T. sanguinipennis. If you or someone you know supports native pollinators like Colletes bees, the Tricrania tale is one you won’t want to miss!