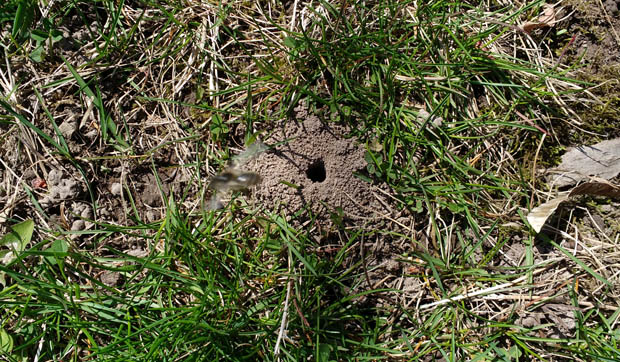 Even if you can’t get a clear view of a ground bee, their nesting habits give them away. Look for small mounds that look much like anthills. Female bees lay their eggs in cells several inches below the surface.

The other day I was at Langum Woods in St. Charles, getting ready to work with some wonderful volunteers from Elgin Community College’S Phi Theta Kappa honor society. The students were going to assist in the ongoing restoration of that woodland and I had about 30 minutes to get the tools ready and the site surveyed for safety.

Rakes? Check. Shovels? Check. Poison ivy? Check and double check. But thankfully it wasn’t growing anywhere near where we would be working.

I was about to go about the most important part of the preparations, setting out the after-work snacks, when a tiny blur of motion caught my eye. Then came another, and another…

Down went the clementines, cookies and sparkling water–they could wait. Little bits of nature were flying through the air, and I had only a few minutes to investigate.

Walking across the grass near the historic Jones Law Office (which was relocated to Langum in 2014) I soon saw the source of those flying bits. Dozens of small mounds that could easily be mistaken for anthills dotted the lawn area. But rather than ants, each hill was home to an individual ground bee. Together they formed a good-sized subdivision there in the soil.

Like some human housing complexes, the mounds all looked pretty much the same to me–sandy crumbles of earth with a hole about the circumference of a pencil smack-dab in the center. But somehow the bees knew which burrow belonged to whom. I chose one hole to focus on and after about 5 minutes a bee landed and then quickly disappeared underground. A few minutes later she reappeared and took off again, likely heading for the woods and the spring wildflowers it offers.

Even though they share the same last name of “bee,” ground bees are as different as can be from that pollinator poster child the honey bee. For one, “ground bee” isn’t a distinct species but rather a blanket term used to refer to any of the 2,800-plus species of native bees that excavate holes in the soil. Honey bees, which are not native, belong to the genus Apis (which is Latin for “bee”) and the species we see in our area is A. mellifera.

Further, honey bees nest above ground, live in colonies with intricate social interactions and of course make honey. Ground bees live below ground and, while their holes might look as though they all belong to a larger underground colony, their behavior is solitary. The burrows do not interconnect, and each bee is responsible for her offspring only. She provisions each egg she lays with pollen and nectar and that, as they say is the end of that. No meticulous feeding of larvae, a la honey bees, nor are ground bees subject to the rulings of a queen.

The downside is that, unlike honey bee colonies that perpetuate from year to year, ground bees’ life cycles are of the one-and-done variety. The eggs that are being laid right now will hatch into larvae, which will then feed, pupate and emerge as adults next spring to start the next generation. The bees we see flying around today will be gone in a few weeks, their brief mature stage over and done with.

But thank goodness for this final, industrious phase. Many spring wildflowers as well as trees rely on these insects to complete their own life cycles. This early in the year, pollinators that fly are few and far between. Many species of ground bees become active as soon as the soil temperature starts to rise, and quickly head out out in search of three things: pollen, nectar and a mate (though not necessarily in that order). As they feed they move pollen grains from plant to plant, ensuring that the flowers get what they need to produce the seeds that are their sole reason for being.

Next week: We continue our exploration of ground bees.