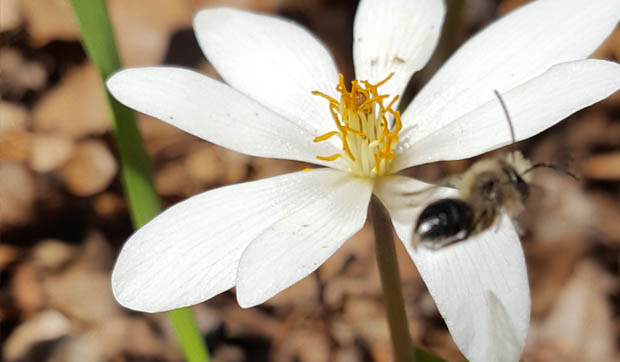 Ground bees, as we saw last week, are some of our area’s most beneficial insects. They provide spring flowers with the much-needed service of pollination. But plants aren’t the only organisms that benefit.

Humans whose yards are home to ground bees are getting what they need too, whether they realize it or not. The insects’ excavations help aerate the soil, which improves the penetration of water and nutrients. And that pollination? It’s not just for wildflowers. If you or your neighbors have apple trees or berry bushes, their blooms can’t turn into fruits without being fertilized with help from native bees.

Ah, but wait. As soon as the discussion turns to human-bee interactions, the subject of stings comes up. Can ground bees sting? Yes…and no. Some species can give a noticeable poke, while others have stingers too weak to penetrate human skin. Regardless, the likelihood of getting stung is low. You need to really mess with them to provoke a defensive reaction.

In the previous column I told you about a restoration work day that had occurred at Langum Woods in St. Charles, and how we’d discovered a large number of ground bee nests in the lawn. Throughout that afternoon the student workers and I walked along and among the nests without incident. Neither our footsteps nor our voices and excited gestures had any effect on the insects, who went about their business as though we weren’t even there.

(Oh boy, time for sidenote… I have a feeling that yellowjackets may have given ground bees a bad name. Yellowjackets are Vespinae wasps that, like ground bees, also happen to nest in the ground. However, as social insects they have workers whose job is to protect the colony. Their societal norm is to sting first and ask questions later. They react to footsteps, gestures and pretty much any other vibration or movement, leading to painful encounters that leave their victims wary of any flying insect that erupts from the ground.)

Good Natured readers may have by now noticed that, throughout this discussion of these fascinating insects, we have used only the very broad term “ground bee,” with no reference to genus or species. And you know what? We’re not going to. Accurate identification requires examination of parts that are hard to see even when the bees are holding still, let alone when they’re buzzing around doing their important work.

I know what you’re thinking… Take a picture, it’ll last longer! Believe me, I’ve tried. But my marginal photography skills, that are barely adequate for capturing rocks and dead stuff, are no match for these fast flyers.

About the best I can do is identify the insects’ families. Some are miner bees in the family Andrenidae, and some are cellophane/plasterer/polyester bees and belong to Colletidae. (Fun fact: Female bees in this family line the cells in their burrows with a cellophane-like substance that is a bona-fide polyester. Miner bees, on the other hand, secrete a substance that soaks into the ground, then is rubbed by the female to produce a smooth and sturdy cell wall.)

In going over some of those aforementioned photo attempts, I realized I may actually have examples of individuals from both families. One of the pictures I snapped that day at Langum Woods ran with last week’s column. Though blurry, the bee in that image displayed distinct stripes on its abdomen. This feature could, just maybe, indicate Colletes inaequalis, a polyester species that is very common in springtime throughout the eastern United States.

The picture that appears with this week’s installment came courtesy of my friend Elizabeth. She was trying to capture the beauty of a bloodroot in bloom but realized later she’d been photo-bombed by a speedy bee with a dark abdomen. Some, though not all, Andrena species exhibit such markings.

As we proceed through the year, even more ground-dwelling bees will start to appear. Some will be Halictidae, or sweat bees; a few might be Megachilidae, the mason and leafcutter bees. Others will be Apidae, the family that besides honey bees includes bumble bees, those big and bumbly bees that make up the genus Bombus.

This weekend looks to be sunny–or at least it did the day I wrote this. The Langum ground bees should be out enjoying the nice weather, and you might choose to do the same. If you can, take a camera or smartphone so you can attempt to take some pictures of these winged wonders, or at the very least the wildflowers that they visit.

You never know, you might get lucky and get photo-bombed by a bee…maybe even a photo Bombus.