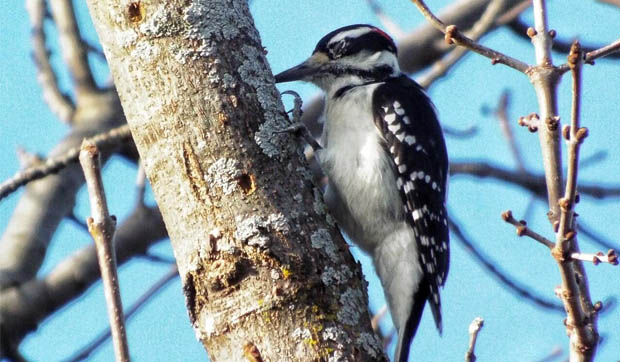 Eyes closed against possible splinters, a male hairy woodpecker forages along a tree branch. Although similar in appearance to a downy woodpecker, hairy woodpeckers can be distinguished by their larger overall size and–here’s the clincher–a bill that is nearly as long as the bird’s head. Downy bills, by comparison, are about half as long. (Photo credit: davidpwhelan at MorgueFile.com)

Although the word “hairy” isn’t itself inherently bad, it’s often used to describe something that is less than ideal. A hairy situation typically is one that’s turned treacherous. A hairy problem can be tricky to solve. And a hairy sink…well that’s just gross.

A hairy woodpecker, on the other hand, is darn cool.

Here in Kane County, hairy woodpeckers, a.k.a. hairies, are definitely a minority when compared to their smaller cousins the downy woodpeckers, or downies. Should you be lucky enough to spot a hairy, you certainly want to take a second look.

Both hairies and downies belong to the genus Picoides, a name derived from the Latin word picus, which means-get this-woodpecker. Both species are predominantly black and white, with checkered wings and a white stripe on their backs. And the males of both birds have a splash of red on the back of the head.

The difference lies in their size. Downies are the smallest of our local woodpeckers, measuring about 6 1/2 in. in length, while hairies are 9 1/2 in. or more-like a downy on steroids. (Food addict that I am, I like to relate the two species as hot dogs. Downies are about the same size as a regular Portillo’s dog, while hairies are more like the jumbos you can get for about 50 cents more.)

You’d think this size difference would make distinguishing the species a snap, but a few inches aren’t much when the bird in question is 50 feet away and pecking its way around a massive oak tree.

Probably the easiest way to tell downies and hairies apart is to look at the bill relative to the rest of the body. On the downy, the bill is small, almost like a thorn poking out of the front of the bird’s head. The hairy’s beak, by contrast, is about as long as the head itself.

I was reminded of this difference just the other day when I saw, for the first time in several months, a hairy woodpecker in the Native Plant Garden at Pottawatomie Park in St. Charles.

I say saw, but I actually heard the bird first. It was determinedly rapping on a dead branch in a tree close to the river, picking away at the loose bark and digging for larvae and other treats embedded in the wood. (This hunt-and-peck foraging behavior is decidedly different from the drumming woodpeckers are famous for. Listen for drumming on hollow branches and gutters next month, when woodpeckers of all species begin to drum to declare territories in preparation for spring breeding.)

About the same time I pinned down which tree the sound was coming from, the bird hopped from one branch to another, and I was able to see the red on the back of the head. Aha! A male.

It took another minute or so of watching before I was able to see the bill and note its large size. Right about then the bird noticed he was being watched. For a few moments he stared back. Who knows? Maybe he was sizing up me and my beak. But then, just that quick, he flew off. I watched as his body rose and dipped in the undulating flight pattern typical of woodpeckers, then I lost him in the trees along the edge of Pottawatomie’s golf course.

This hairy sighting got me to thinking…how is the species faring in our area? A look back at  Kane County Audubon’s Christmas Bird Count data shows that downy woodpeckers tend to outnumber by a ratio of roughly 8:1. There was a similar trend in KCA’s Spring Bird Count data, with birders sighting an average of about 70 downies versus nine hairies per year.

Perhaps the main reason for this disparity again relates back to the size difference between downies and hairies. Small and compact, downy woodpeckers can forage on many different types of plants, including those with herbaceous stems. But the hunky hairies need to hunt on woody trunks and branches that can support their weight; hence their distribution is determined by the size and quality of woodland habitat available.

Although not present in great numbers, hairy woodpeckers’ status appears stable. Like cucumber slices on a hot dog, they’re unusual but not impossible to find.

Now that we’ve had some snow to provide a little color contrast, woodpeckers in general should be easier to spot. If you see a black and white bird with checkerboard wings making its way along a trunk or branch, try to figure out if it’s “regular” or “jumbo” sized. And see if you can catch a glimpse of the bill. With any luck at all, you just might find yourself in situation that’s-say it with me-Hairy.