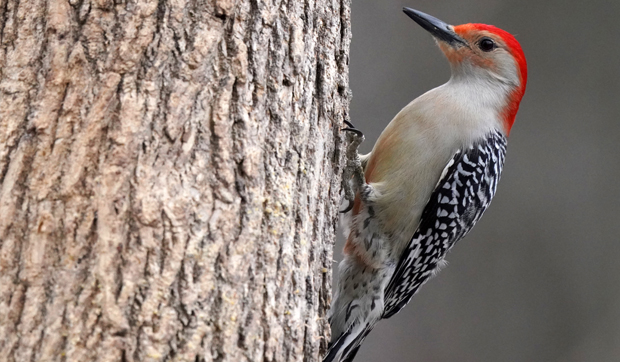 Knock on wood: Instead of singing to declare their territory, woodpeckers drum on trees and other resonant surfaces. Several structural adaptations protect the birds’ brains from damage.

The morning routine at Casa Otto is fairly predictable. First one furry roommate wakes up, then another. The third one usually follows suit and at that point I know resistance is futile. It’s time to get up, and out!

Even on the coldest days No. 1 pup Joey insists I come out too, for several minutes of frisbee fetching. Something in his cattle dog genes drives him to capture the disk, throw after throw, and return it to me for another go.

In between tosses, I have some time to take in the glory of the new day. Lately it’s been fun to hear the sounds of old friends exuberantly declaring, even when it’s 10F, that spring is just around the corner: the what-cheer, what-cheer and birdie-birdie-birdie songs of the northern cardinal; the clear two-noted song of the black-capped chickadee (to which some folks sing the words, “Spring’s here!”); and, in a nice surprise, the sentence-long song of the song sparrow (“Maids-maids-maids-put-on-your-tea-kettle-ettle-ettle!”)

I was listening to these tunes the other day when I realized that, in addition to the crooners, I was hearing percussion too: the persistent drumming of a woodpecker, banging furiously on a hollow branch. A handsome redbelly was enthusiastically hammering away, letting me and the entire neighborhood know we were in his territory.

Which then got me to musing, as I always do when I hear such drumming, what a remarkable structure the woodpecker’s skull is.

Think about it. What if your lot in life was to bang your head against a tree, or maybe a gutter, any time you wanted to grab some attention? While attention is indeed what you’d get, all that repetitive thrashing would soon bruise your delicate noggin. With continued whacks your poor brain would get jostled, then proceed to swell and, eventually, cease to function.

Not so the woodpecker. Even after repeated bouts of drumming, with deceleration forces of 1,200 to 1,400 Gs each time its beak hits the solid object, a woodpecker retains all or at least most of its faculties. How can this be?

The secret lies in a series of intricate adaptations woodpeckers have developed over millions of years of banging heads.

For one, the woodpecker’s brain is packed much more tightly inside its skull than, say, a human brain, which has a fair amount of space around it. With less room to move around, and less cranial fluid, there’s less sloshing and less chance of injury.

Second, woodpecker brains are longer from top to bottom than they are from front to back. Such a design means that the force from an impact is spread over a larger surface area, as compared to a human brain, and trauma is thus minimized.

The bird’s brain also benefits from bones with spongy structures that help diffuse the force of impact. Think of the last time you packed a delicate object. Did you toss it in a box and hope for the best, or did you nestle it in a container and surround it with soft packing material?

Finally, woodpeckers are blessed with a highly adapted hyoid apparatus. In humans, this strap-like bone is positioned just below our lower jaw. It supports the tongue above, and the larynx below. But in woodpeckers, it goes above, and beyond.

Like the orthodontic headgear I had in high school, it extends from the base of the bill backwards, up and all the way over the top of the skull. But unlike that geeky external contraption I wore, the woodpecker’s internal apparatus is really cool.

It continues down the front of the head and, in the redbelly and certain other species, goes all the way into the either the right or left nostril. When the woodpecker prepares to start whacking, it pushes its tongue forward ever so slightly, a movement that serves to tighten the apparatus; it then serves as a safety belt of sorts, stabilizing the head and neck and saving them from harm as the bird repeatedly slams into a tree.

As I tossed Joey’s frisbee one last time, I looked up at the red-bellied-woodpecker whose drumming had started all these early-morning musings. Even after all the head banging, he seemed just fine. I, on the other hand, having just recalled the phrase hyoid apparatus so early in the morning-pre coffee, even…had a bit of a headache.