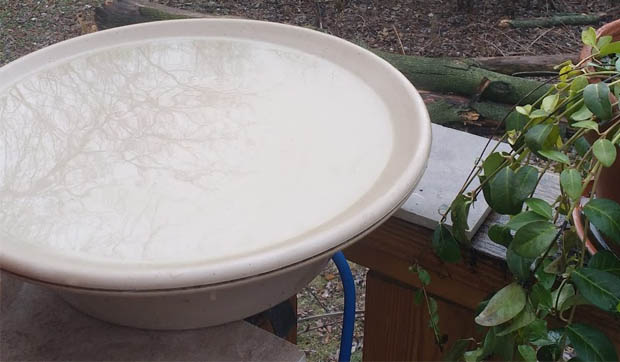 Open water can be hard to find in winter, yet local wildlife depends on it for survival. A heated birdbath, once properly installed, can be just the ticket.

Good Natured: The Joys of a Heated Birdbath

It seemed like such a good idea at the time.

For years I’ve touted the benefits of winter water sources for wildlife. And while we’ve got plenty at various locations throughout the St. Charles Park District, I personally had none.

But that changed – make that started to change – in December 2016. That’s when I purchased for myself, as well as all the neighborhood birds, squirrels and other thirsty critters, the ultimate gift for wintertime nature lovers: a heated birdbath. Merry Christmas to us!

The only problem was, the best part of the gift-the heat-required electricity. And my vintage 1970s house, groovy as it is, had no outdoor receptacles.

Undeterred, I mounted the unit on my deck railing. As I attached the bolts and nuts I made a vow to install an outlet next spring, and resolved that in the meantime I’d get up early every morning, heat a kettle of water, de-ice the birdbath, refill and repeat daily until warm weather returned.

It was a great plan all right. For about a day.  After that, the birdbath sat there on the deck rail, frozen over and, I swear, taunting me, until about April.

From then until November though it was birdbath business as usual. Each day I’d use an old toothbrush to cleanse the interior of the bath before rinsing and refilling with cool, refreshing and life-giving water.

But the outdoor outlet? Didn’t happen.

Winter of 2017-’18 came and went with its attendant icing-over and taunting, and spring-summer-fall brought more daily rinses and refills. November rolled around again and, at long last, the day came when I decided Jack Frost would not ruin another season of bird bathing. Armed with a Menards gift card and a rudimentary knowledge of household wiring, I tackled the power problem head-on. I bought an outdoor light fixture with two-count ’em, two!-GFCI outlets. Happy Black Friday to us!

Since I already had a light on my deck, installation of the new fixture was pretty straightforward. I shut off every circuit that could possibly serve that side of the house, then connected black wire to black, white to white and ground to ground. No sparks flew, no hairs were singed. And most important (once I remembered to flip the switch) there was light!

I plugged in the birdbath using a new all-weather extension cord, filled the basin with water and spent the rest of the evening congratulating myself on getting the project finished before the blizzard that had been added to the forecast began.

The next couple of weeks went something like this: Day One, no birds. Night One, blizzard, complete with heavy snow, wind and a tree falling across the backyard. Day Two, no birds but steam rising tantalizingly from the bath. Day Three, water level down due to evaporation; still no birds. Days Four through 18, birds all over the yard, but not a single one at the bath. Doggone it!

At that point, I decided to go back out into the yard and take, literally, a birds-eye view of the situation. After a little inspection, and introspection, I came up with a hypothesis on why my birdbath was a nonstarter.

When the tree fell down, it left more than just debris on the ground and a branch poking through my bedroom wall. (A branch that, by the way, makes a dandy hat hook. But that’s a story for another time.)

The cover provided by the tree, even though it was dead, gave the wildlife visiting the deck a sense of security. Its spreading limbs provided a distraction for raptors sailing overhead, and made it less likely they would notice the birdbath and its occupants. Birds approaching the bath could perch and size up their landing strategy without fear of attack. And, should a Cooper’s hawk or other bird of prey come calling, the tree and its camouflage were only a hop, skip or jump away.

I took stock of what lay around the backyard. The trunk of the tree, 15 feet long and 1,000 lbs. wasn’t going anywhere. But two 15-ft. branches…now, they had possibilities. I broke through the ice that held them to the ground and dragged them over to the deck.

A couple of failed engineering attempts later (and, by the way, hats off to beavers for what they can accomplish with similar materials) I finally succeeded in piling the branches in a way that delivers just what the critters were looking for: shelter, protection and safety.

I came home from work the next night to find the birdbath nearly empty! Even better, there were telltale signs that the water didn’t just evaporate. The birds that had visited during the day had kindly left various calling cards, including a small gray feather and the cutest little dot of bird doo I ever did see.

Maybe, just maybe, that heated birdbath was a good idea after all.